I know it’s everyone’s dream to see outside the wavelengths allotted to our visual systems. Well, as usual, mice have gotten there first, with the help of some clever scientists. By injecting specialized light-tweaking nanoparticles into a mouse’s retina, that mouse is suddenly and clearly able to perceive near-infrared light â€” suggesting the same could be possible for us, assuming you don’t mind a needle in the eye.

The advance involves what the researchers, from the University of Science and Technology in China, call “ocular injectable photoreceptor-binding upconversion nanoparticles.” It’s actually not as complicated as it sounds. Well… actually, it is pretty complicated.

The human eye can only see wavelengths of light between about 430 and 770 nanometers; above that is ultraviolet and below it is infrared. We don’t see infrared but in great enough quantities we can sense the heat it imparts. All objects give off IR, increasingly so the warmer they are, which is the basis for heat vision goggles.

But while some infrared is well outside our ability to sense, a band known as near-infrared (NIR) is just below the reds we can detect. What if you could shift that NIR upwards with some kind of optical trickery? We do it all the time, of course â€” convert one kind of light or energy into another.

In fact, it turns out that these researchers had already created the necessary trickery for a different reason, namely as a molecule for optogenetic triggers that would absorb infrared light (which conveniently penetrates many tissues) and emit visible spectrum light instead.

The nanoparticles bind to rods and cones, coating them and changing the wavelengths they are sensitive to.

These “nanoantennae,” as the researchers call them, are biocompatible and can be combined with proteins that encourage them to bind with the photoreceptive cells in our retinas. What happens when you coat a cell that normally detects green light with a molecule that absorbs NIR radiation (900-1000 nm) and outputs something 500 nm shorter? That cell can effectively now sees IR as a shade and intensity of green. 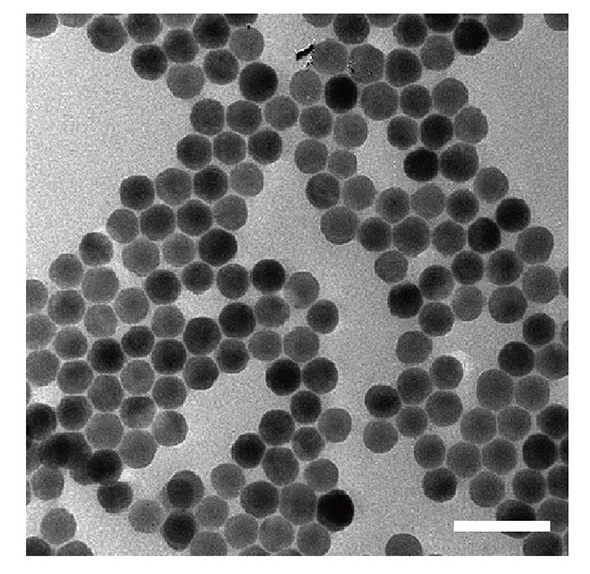 That’s exactly what happened when the team injected these molecules into the eyes of mice (such subretinal injections are already done in humans with some eye problems); the animals were instantly able to detect NIR in a variety of circumstances. Not only did a beam of IR cause their pupils to constrict, but patterns projected in IR indicating a reward were reliably sought by the mice, indicating this was not just a general awareness but detailed perception in the wavelength.

Note that this is different from the colorful “heat vision” we see in movies â€” night vision goggles use electronic sensors to amplify and categorize incoming radiation outside the visual range, producing those interesting noisy rainbow images. This would be more like seeing something warm as slightly more bright (and greener) than a cooler item of the same color. You’d also be able to see the TV clicker blinking its little patterns.

The molecules also seemed to cause no serious problems in the retina, such as cell death or irritation â€” and the mice were still able to see in IR some 10 weeks after injection.

The team explains the importance of their findings:

It is important to note that these injected nanoantennae did not interfere with natural visible light vision. The ability to simultaneously detect visible and NIR light patterns suggests enhanced mammalian visual performance by extending the native visual spectrum without genetic modification and avoiding the need for bulky external devices. This approach offers several advantages over the currently used optoelectronic devices, such as no need for any external energy supply, and is compatible with other human activities.

In other words, this could be a simple, safe, and reversible way to extend human vision well beyond our present capabilities â€” no batteries required. Not exactly something you’d want done on a whim, but you better believe the military would be interested. Of course a great deal of further work and testing needs to be done, but this does seem like a particularly promising application of nanotech.

The research was published today in the journal Cell.