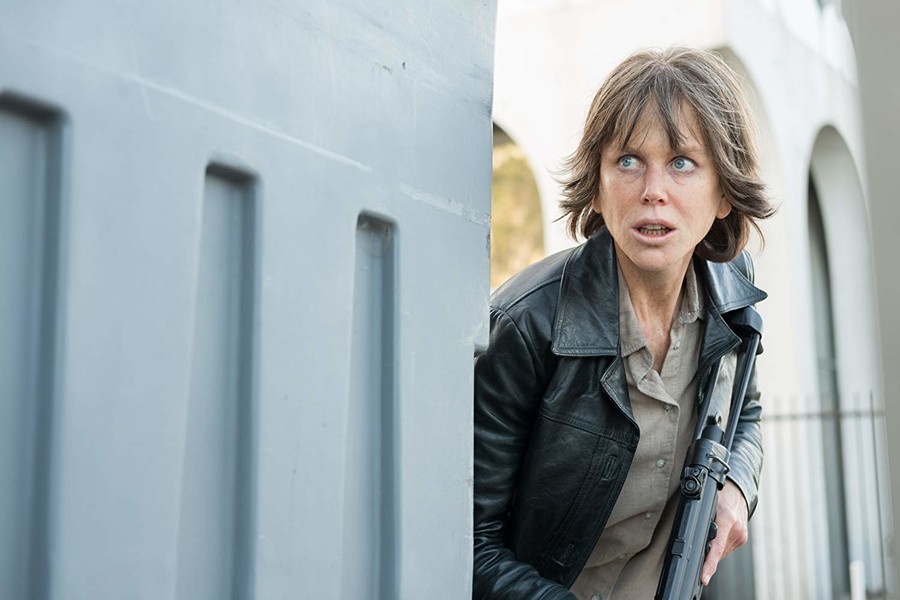 We first meet Erin Bell, the central character in Karyn Kusamaâ€™s new film Destroyer, with her eyes open and her decaying face bathed in bright light. We know instantly this is a story about a woman facing death, and we want to know why. That the film ends exactly as it begins is the sort of narrative choice that feels innovativeâ€”that is, until you really consider the implications. We know that the film is about Bell (Nicole Kidman), a hardened female detective trying to solve a murder, but what could be a haunting and compelling family drama is padded out with formulaic thriller elements, a grand miscalculation that undermines the genuine emotion thatâ€™s the most compelling aspect of the film.

Bell is an unconventional monster, a Frankenstein of sorrow, a patchwork of self-imposed deterioration. Twenty years after her role in an undercover operation led to the murder of a loved one, Bell has lived with little regard for her own health or safety. Sheâ€™s a ruthless cop, a bad partner, and a neglectful mother. Her ex-husband, Ethan (Scoot McNairy), is heartbroken, and her teenage daughter, Shelby (Jade Pettyjohn), has taken to skipping school and â€œdatingâ€� an adult man (Beau Knapp). Bellâ€™s belief that she has broken her life beyond repair leads her on a single-minded quest to take down a criminal from her past.

Bell is the kind of tragic Hollywood cop most often portrayed by men: a hard-boiled sleuth haunted by past sins, running on no sleep, and drinking herself into an early grave. Sheâ€™s the sort of female character who seems to flourish only on the small screen. True Detectiveâ€™s Antigone â€œAniâ€� Bezzerides (Rachel McAdams) and Law & Order: SVUâ€™s Olivia Benson (Mariska Hargitay) are noteworthy examples. Itâ€™s difficult to pinpoint why there arenâ€™t more roles like theirs in movies: Yes, there are more female writers in TV writerâ€™s rooms than there are in big-budget Hollywood scripts, but both True Detective and Law & Order: SVU are largely written and directed by men. Perhaps the film industry believes that female detective stories arenâ€™t â€œbigâ€� enough for cinema. So Destroyer definitely deserves credit for putting a character like Bell front and center, but its narrative doesnâ€™t feel worthy of its fascinating main character.

Much like Abel Ferraraâ€™s Bad Lieutenant and William Friedkinâ€™s To Live and Die in L.A., Destroyer gives us a hero with a death wish. The story, however, is unable to marry Bellâ€™s appetite for self-destruction with the troubled love and motherhood that intertwine and drive her actions. Phil Hay and Matt Manfredi, the writing team behind The Invitation, the Ride Along films, and Kusamaâ€™s 2005 film Ã†on Flux, seem afraid to go beyond trash-talking and violence to tackle whatâ€™s actually haunting Bell. Thereâ€™s little reason for the character to be a mystery to the audience, but the script insists on keeping her an enigma until the filmâ€™s superior third act. Subsequently, Destroyerâ€™s ending feels more like a beginning, leaving us hungry for the story we missed out on.

Thereâ€™s also the matter of how Bellâ€™s gritty, dangerous appearance is meant to do the filmâ€™s heavy narrative lifting. Rather than letting Kidmanâ€™s performance convey her toughness and sorrow, Destroyer shortcuts the character with the tried-and-true de-beautifying technique that Hollywood has celebrated in award-winning performances like Charlize Theronâ€™s in Monster and Halle Berryâ€™s in Monsterâ€™s Ballâ€”and in Kidmanâ€™s own portrayal of Virginia Woolf in The Hours. While I donâ€™t believe that female characters have to be appealing, I do think itâ€™s possible to portray a womanâ€™s darkness without hiding her under layers of obvious prosthetics and face-changing makeup. Itâ€™s also worth noting that Bellâ€™s male counterpartsâ€”such as the titular Bad Lieutenant or To Live or Die in L.A.â€™s Richard Chanceâ€”are afforded the privilege of being simultaneously tough and physically attractive. The uglying up of Kidman is just one symptom of a larger problem: Destroyer seems afraid to delve into any themes that could be read as feminine.

These narrative flaws are frustrating because thereâ€™s so much to love about Kusamaâ€™s fourth film. Destroyer is shot and scored like a horror film, with evocative violence and a gifted castâ€”Michael Mann with a grimy top layer of Rob Zombie. Bell lumbers through the world like Jason Vorhees or Michael Myersâ€”unstoppable, unkillable, and utterly relentless. Her voice is a low, raspy rumble.  And thereâ€™s a hint of Atomic Blonde in that Kidmanâ€™s physical performance, like Charlize Theronâ€™s, is of a higher caliber than the script sheâ€™s beholden to. Though she goes all in on the filmâ€™s dramatic potential, sheâ€™s at the mercy of a formula that favors heavily symbolic style over substance.

Ideally, Destroyer would meld the best parts of  Kusamaâ€™s most successful genre efforts: the newly-vindicated Jenniferâ€™s Body and the critical darling The Invitation. Jenniferâ€™s Body featured a female vigilante exacting revenge on men who underestimate and objectify her. And Kusama achieved this without stripping Jennifer (Megan Fox) of her sexuality and balancing screenwriter Diablo Codyâ€™s often clumsy dialogue with a gothic and fun cinematic style that heavily relies on animated facial expressions. Itâ€™s easy to imagine how Destroyer could have wedded Jenniferâ€™s thoughtful understanding of women with the narrative sparseness, slow-burn thrills, and pulse-pounding tension of The Invitation. But unfortunately, Destroyer is much less daring.

The workmanlike plot is constantly at odds with the filmâ€™s emotional core, and weâ€™re bombarded with forgettable criminals when the most interesting characters are offscreen, in anguish. There are times when Destroyer takes a swing at greatness. â€œYou know what successful people do? They get over shit. Build things.â€� These words are spoken by Bradley Whitfordâ€™s smarmy, crooked lawyer character, and they stayed with me long after the credits rolled. Bell lets her past eat her alive without taking the time to fully understand itâ€”so we canâ€™t either. That is ultimately her, and the filmâ€™s, downfall.

Read this Next: Jennifer's Body: Is it Feminist? YOU MAKE THE CALL!

by Kelsey Wallace
The trailer for the newest Diablo Cody film, Jennifer’s Body is out, and this thing is begging for a bit oâ€™ feminist…