Ecommerce giant Alibaba is continuing its push into the world of youth culture after it scooped up an 8 percent stake in anime streaming and game publishing company Bilibili.

According to a securities filing on Thursday, Alibaba’s Taobao marketplace has acquired about 24 million shares in Bilibili, the Shanghai-based firm that has captured 93 million monthly users from hosting licensed anime titles, video games and user-generated content.

The financial gesture is hot on the heels of a partnership announced in December that saw the pair working to monetize Bilibili’s content assets. For one, Alibaba can help Bilibili creators sell merchandise like cosplay costumes and anime toys through Taobao’s online bazaar. Bilibili itself owns an e-store, but Taobao’s command of 700 million monthly users dwarfs its reach.

“The partnership is great news for ACG content creators,” a Shanghai-based merchant that sells Lolita costumes on Taobao told TechCrunch, referring to the acrynom for “anime, comic and games.” The owner sells through both Taobao and Bilibili, though most sales have come from Taobao. 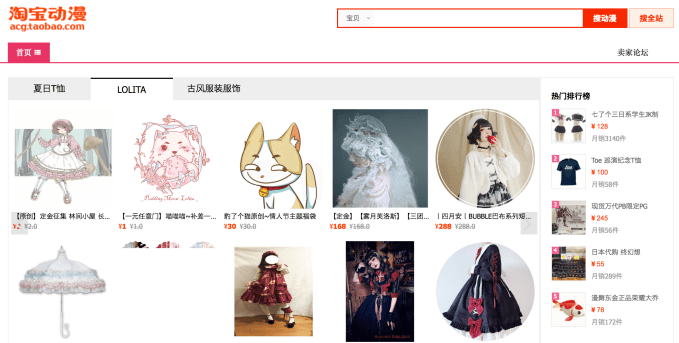 Screenshot: Taobao has a dedicated channel for anime, comic and gaming (ACG) items.

What Alibaba gets in return is access to China’s Generation Z. Bilibili claims that 82 percent of its users were born between 1990 and 2009. In a savvy move, Alibaba hooked up its food delivery unit Ele.me with Bilibili in December to tap a demographic of anime-watching and game-playing young people reliant on delivered meals.

“Over 1.6 million content creators, including anime, comic and games (ACG) experts, were actively supporting the Taobao app and helping brands on our platform engage with consumers,” said Fan Jiang, vice president of Alibaba and president of Taobao, back in December. “Through deep cooperation with intellectual property holders and content creators, Taobao has experienced the great potential of ACG.”

Tencent and Baidu’s iQiyi have also spent big bucks to beef up their respective anime offering, but Bilibili’s flourishing youth community gives it an edge over these deep-pocketed video-streaming heavyweights and to an extent makes it an investors’ darling. The eight-year-old company is notable for being one of the rare companies that count both Alibaba and Tencent — which compete on multiple fronts spanning ecommerce to cloud computing — as their investors. Other companies that won backings from the duo include China’s largest ride-hailing service Didi Chuxing.

Last October, social media and gaming juggernaut Tencent poured nearly $320 million into Bilibili in exchange for a 12.3 percent stake. While Alibaba helps drive revenues to Bilibili’s community of creators and potentially boost their loyalty to the site, Tencent could help it save on licensing fees for games and animes.

“Tencent and Bilibili are two of the major players in the animation industry. By working with Tencent, this will intensively expand our content offering and effectively decrease our content investment in the animation copyright procurement,” Chen of Bilibili said during the company’s Q3 earnings call.

Netflix office goes on lockdown over report of a potential shooter, suspect now in custody Kleiner’s Mamoon Hamid thinks we could be in a 15-year-long bull market (and other insights from the firm)