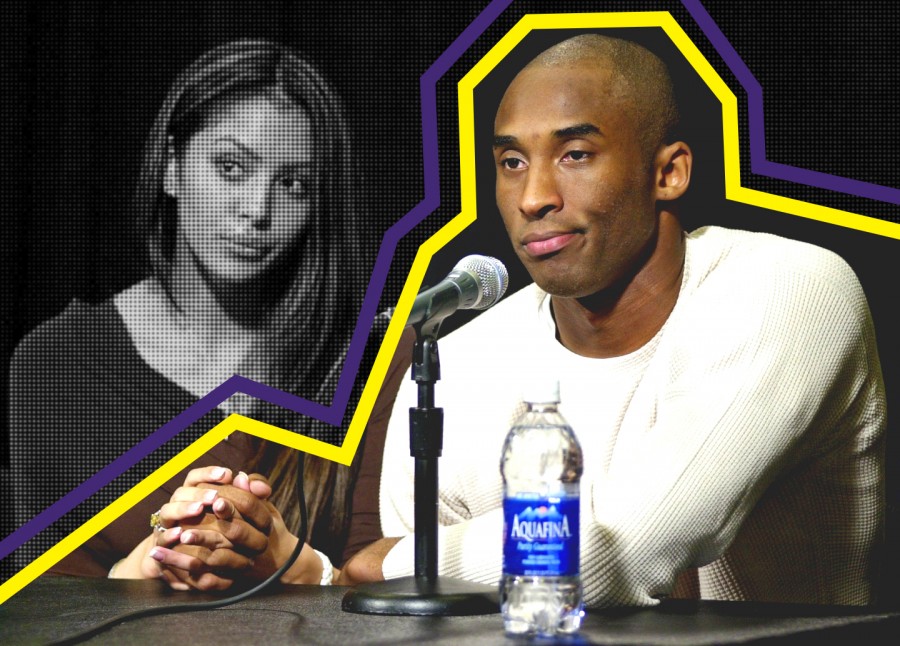 Vanessa and Kobe Bryant at a press conference in 2003 at the Staples Center in Los Angeles (Photo credit: Jerome T. Nakagawa/AP/Bitch Media illustration)

Fifteen years ago, one of the NBAâ€™s greatest players made national news for reasons unrelated to his hoops skills. In July 2003, a 19-year-old employee of the Lodge and Spa at Cordillera in Eagle, Colorado accused Kobe Bryant of raping her. In the aftermath, Bryant was arrested and charged with sexual assault and false imprisonment. The press questioned the accuserâ€™s credibility, exposed and criticized her sexual history, and shamed her until she declined to testify in the case. By September, the charges were dropped, and Bryant, unscathed by the accusation, resumed his career.

The allegation became front-page news again earlier this year when Bryant was nominated for (and ultimately won) an Oscar for his animated short film, Dear Basketball. In April, ESPN announced that Detail, a new basketball analysis show hosted by Bryant, will air on their streaming platform, ESPN+. And this week, Sports Illustrated published a glowing profile of Bryantâ€™s new role as an entertainment mogul who wants to create podcasts, books, and musicals for kids without a single mention of Bryantâ€™s scandal. In the era of #MeToo, as men accused of sexual harassment and assault are being publicly named and shamed and, in many cases, losing their jobs (though most have not lost their fortunes or their freedom), itâ€™s worth asking whether companies should be approaching their employment decisions differently.

While the Bryant accusation happened in 2003, the details are still damning. Initially, Bryant said heâ€™d had no encounter with the alleged victim, but eventually, he admitted to having â€œconsensualâ€� sex with his accuser after police told him there was physical evidence, including his semen, and her pelvic exam showed signs of vaginal trauma. The woman had bruises on her neck, and Bryant admitted to â€œstranglingâ€� her during intercourse, and not asking for explicit consent before or during the encounter.

After the criminal case was dismissed, the accuser settled with Bryant in civil court for an undisclosed amount. As part of that agreement, the accuser required Bryant to write an apology that his attorney read in court. In hindsight, Bryantâ€™s apology doesnâ€™t dispute his accuserâ€™s version of events:

â€œI want to apologize directly to the young woman involved in this incident. I want to apologize to her for my behavior that night and for the consequences she has suffered in the past year. Although this year has been incredibly difficult for me personally, I can only imagine the pain she has had to endure,â€� the apology begins. â€œI also want to make it clear that I do not question the motives of this young womanâ€¦ Although I truly believe this encounter between us was consensual, I recognize now that she did not and does not view this incident the same way I did. After months of reviewing discovery, listening to her attorney, and even her testimony in person, I now understand how she feels that she did not consent to this encounter.â€�

Yet, Bryantâ€™s reputation hasnâ€™t suffered much. He retired from the NBA in 2016 after playing 20 seasons, appearing in 18 All-Star games, and winning five championship rings. But that was all before #MeToo, so itâ€™s reasonable to assume that networks, like ESPN, would consider the allegations before working with Bryant, especially as stories about Charlie Rose, Matt Lauer, and Louis CK forging comebacks have generated pushback.

Rape and sexual violence is inherently about power. Thatâ€™s why ex-Oklahoma City police officer Daniel Holtzclaw was able to leverage his position of authority to sexually violate and rape poor and working-class Black women and girls whose prior relationships to the criminal-justice system made them less likely to report himâ€” and far less likely to be believed if they did.

Itâ€™s imperative that we consider all of these factors when discussing Cosby rightfully facing consequences for the pain heâ€™s caused. Thereâ€™s a rift between the criminal-justice system and rape and sexual assault victims. This might explain why so many people still think Cosbyâ€™s accusers are â€œjust now coming forwardâ€� despite the fact that, for many of them, this has been a decades-long ordeal involving authorities, lawyers, courts, and Cosbyâ€™s substantial bank account.

Though slavery â€œofficiallyâ€� ended in 1863 with the signing of the Emancipation Proclamation, it wasnâ€™t until June 19, 1865 that many enslaved Black Americans in the South were officially set free (hence the widely celebrated Juneteenth holiday). The 13th Amendment was ratified in December of that same year, guaranteeing that â€œneither slavery nor involuntary servitude, except as punishment for crime whereof the party shall have been duly convicted, shall exist within the United States, or any place subject to their jurisdiction.â€�

The key point here was that those convicted of crimes were not protected by this statute, and since 1865, prisons have capitalized on this loophole. Jim Crow laws made incarceration through debt peonage a common practice, according to Douglas A. Blackmonâ€™s 2008 book, Slavery By Another Name: The Re-Enslavement of Black Americans from the Civil War to World War II. Black Americans could face outrageous charges for purported loitering, refusing to give their earnings to white landowners, or simply walking down the street without the permission of a white person.

Itâ€™s a continuation of the message women are constantly receiving from the sports world: You donâ€™t belong here; this space is not for you. Weâ€™re constantly being reminded that we donâ€™t matter.

Hiring Bryant also doesnâ€™t reflect well on ESPN as they face a sexual harassment and sex discrimination lawsuit from former employee Adrienne Lawrence. Last fall, ESPN came under fire for their show with Barstool Sports, a website known for its toxicity toward marginalized communities and the propensity for its fans and founder to troll and harass women online. They canceled the show, Barstool Van Talk, after just one episode, saying, they â€œerred in assuming [they] could distance [their] efforts from the Barstool site and its content.â€�

At the time, I wrote that ESPN needed to decide who they want to be: â€œCommitment to gender equality in the sports media world has to go beyond simply putting women in front of and behind the camera, but putting them in the rooms where executive decisions are made as well. Itâ€™s hard to imagine that any women were involved in the behind-the-scenes decision-making about the Barstool partnership.â€� And that was before the Boston Globe published an investigation into the companyâ€™s culture of misogyny, harassment, and discrimination in December 2017. Several former employees said they faced inappropriate advances from male co-workers, were retaliated against when they brought their concerns to HR, and were forced to hide their pregnancies out of fear that their careers would take a hit.

In the face of all of these highly publicized incidents, why would the leading sports network take a chance on a show with Bryant? It willfully disregards the #MeToo movement. In a series of tweets this week, #MeTooâ€™s founder Tarana Burke said the movementâ€™s goal is â€œsupporting survivors by providing resources for healing and action.â€� She continued, â€œIf in the course of that process a perpetrator is held accountable for their actionsâ€�â€”something Bryant has managed to escape over the course of his careerâ€”â€œso be it. But our goal is not to â€˜take downâ€™ individuals itâ€™s to dismantle systems that give them cover.â€� (ESPN declined to comment when I asked them if Bryantâ€™s history of alleged rape was taken into consideration when the show was greenlit).

I still think that only a room filled mostly with men could miss the offensive message that broadcasting this show would send, particularly to women and survivors of sexual violence. Itâ€™s a continuation of the message women are constantly receiving from the sports world: You donâ€™t belong here; this space is not for you. Weâ€™re constantly being reminded that we donâ€™t matter, whether itâ€™s the New York Yankees General Manager and the Arizona Cardinals President openly supporting President Trumpâ€™s anti-choice SCOTUS nominee or a bidding war over a player who has committed horrific acts of abuse against his girlfriend or the NFL suspending serial sexual assaulter Jameis Winston less than the league-mandated minimum for violating their â€œpersonal conduct policy.â€�

At least one athlete has lost a broadcasting job on major networks since #MeToo began: Baseball legend Pete Rose was fired from Fox Sports after allegations of statutory rape from his playing days in the 1970s surfaced. Like Bryant, his alleged misdeeds occurred in the distant past, but perhaps the difference between the two was the fact that the allegations against Rose werenâ€™t made public until last fall. Meanwhile, Steve Lyons is still broadcasting Boston Red Sox pre- and post-game coverage for New England Sports Network despite a domestic battery charge last season (the charges were ultimately dropped).

But the lack of outrage Iâ€™ve seen on social media or in print over Bryantâ€™s show and new life as a family-friendly entertainment mogul means that perhaps ESPN knew exactly what they were doing when they picked up Detail. Maybe they knew that no one would noticeâ€”or no one would careâ€”about a highly celebrated, accused rapist getting another career opportunity. Maybe they were banking on the fact that the sports world has never really cared about violence against womenâ€”something that is only further cemented by glowing profiles like the one Sports Illustrated ran and Bryantâ€™s continuing platform.