Apple Music is rolling out a new playlist series that will feature the Top 100 songs on Apple Music globally and for those countries where Apple Music is available. Because they’re playlists, users will be able to add these top charts for their country or the Top 100Â Global songs to their library so they can stream them any time, or listen offline.

The feature was first reported by Rolling Stone, which was given a preview of the changes by Apple.

At launch, there are 116 charts launching in total, including the Top 100 Global and one for each Apple Music market. Many countries will have access to all of these new Top 100 playlist charts, but availability will vary, we understand.

What’s also interesting about the top chart playlists is that they’ll be updated daily at 12:00 AM PT based on Apple Music streams, which keeps them fresh. 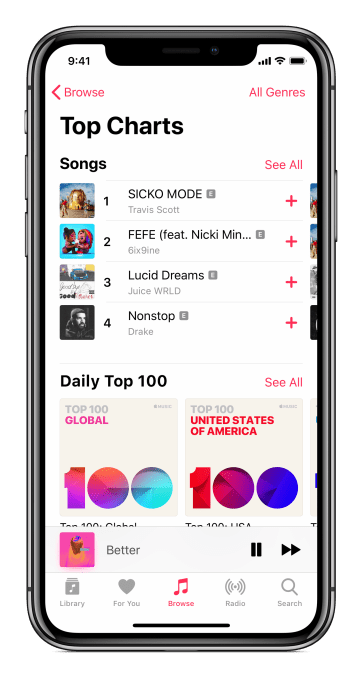 Rolling Stone’s report indicates the release of these charts is due to growing importance of streaming numbers. Artists and their managers as well as labels and scouts tend to reference top streaming charts in the hunt for new talent, it says. And the industry has adapted, too, by more heavily weighting paid streaming over free.

On that front, Apple Music’s dominance in North America means its numbers, in particular, are important to track.

Apple Music, now with 50 million paid subscribers worldwide, is currently ahead of Spotify in the North American market, according to comments made by CEO Tim Cook on the latest earnings call.

Spotify is still ahead on the worldwide stage, with 83 million paid users.Â

However, it’s worth also pointing out that these new top charts aren’t just launching as a static section of the Apple Music app – they’re dynamic playlists.

That is, Apple’s new Top Charts playlists will not be replacing the existing Top 200 Songs chart, available today.

Playlists are an important battleground between the major streaming services, with Spotify focusing heavily on personalization with playlists like its flagship Discover Weekly, plus Release Radar,Â Daily Mixes (and a newer variation, Your Daily Car Mix), Your Summer Rewind, and Time Capsule.

Apple Music, meanwhile, offers users a Favorites playlist, along with a New Music Mix, Chill Mix, and is rolling out a Friends Mix in iOS 12.

The feature is available today on Apple Music. You can check out these playlists as an example: