In addition to the U.S., Search Ads Advanced had already expanded to Australia, Canada, Mexico, New Zealand, Switzerland, and the U.K.

Meanwhile, Search Ads Basic will be available across all thirteen supported countries starting on August 22, 2018 at 10 AM PDT.

To encourage sign-ups, Apple is offering first-time advertisers a $100 USD credit to try out the product.

While the first version of Search Ads launched back in October 2016 in the U.S., the idea behind the newer “Basic” product was to offer developers a different – and simpler – means of reaching potential customers.

Search Ads was originally designed to allow developers to target users’ keyword searches, combined with other factors like location, gender or whether or not they had installed the app in the past. Developers would pay when users tapped on those targeted ads.

With the launch of Search Ads Basic, it’s easier to set up campaigns. 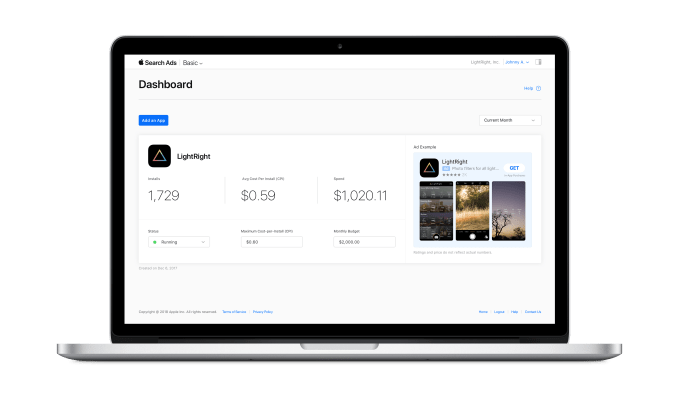 Developers only have to enter the app to be advertised, the campaign’s budget, and how much they want to pay per install. Apple helps by suggesting the max developers should pay using historical data. Then, developers only pay for actual installs, not taps.

Although the App Store was redesigned with the launch of iOS 11 to offer improved discoverability, search is still a key way people find out about apps.

Apple says that over 70 percent of App Store visitors use search to discover apps, in fact, and 65 percent of all downloads come directly from an App Store search.

The ads work well, too, as they have an over 50 percent conversion rate, on average, says Apple.

Apple’s advantage over the pay-per-install ads found elsewhere on the web isn’t only the ads’ placement – at the top of App Store searches, where they’re identified with a blue background and “Ad” icon – it also manages this without violating user privacy. That is, it doesn’t build specific profiles on individuals for ad targeting purposes, and it doesn’t share user data with developers. By its nature, this makes the system GDPR compliant.

In addition, Apple only places an ad when it’s relevant to a user’s search – developers can’t pay more to have their ad shown more often across less relevant searches, which offers a more level playing field.

Apple didn’t say when Search Ads would reach other countries, but with the new expansions it has some of the top markets now covered.