Beyond the Niqab: Liberal Muslims Stand Against Freedom of Religion 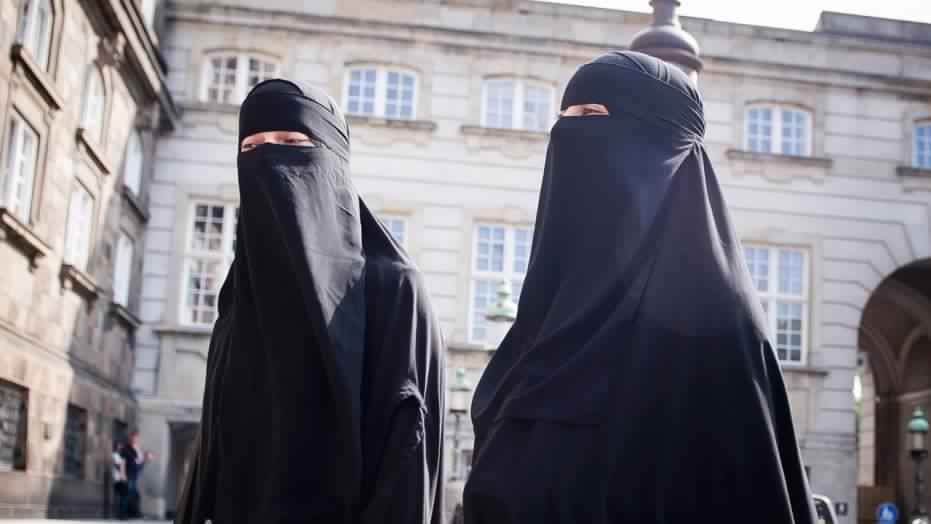 Women wear the niqab in Denmark, prior to the niqab ban. Credit: Mads Claus Rasmussen/Ritzau Scanpix via AP

Hala Shiha, a well-known retired Egyptian actress, announced last week that she is taking off the niqab and veil and returning to acting. Shiha was considered a heroine and a role model in many Salafi Islam and Islamist circles after she shunned a successful career as a movie star and moved to Alberta, Canada adopting the â€˜roleâ€™ of a modest Muslim woman.

Shihaâ€™s first public pictures without any face or hair covering has led to a frenzied reaction from Islamists ranging from appeals for repentance to denunciations and lamentations. Anti-Islamist reaction was no less frenzied, hailing Shiha as the latest to escape Salafi mind control and subjugation. 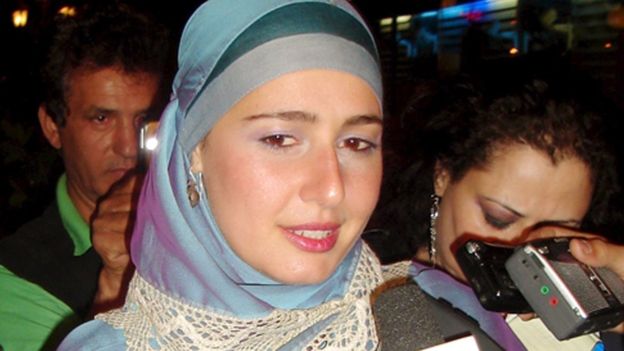 The Islamists and the anti-Islamists claim to represent freedom of choice, and both compete in arguing that the veil and niqab are symbols of freedom and oppression respectively. While former British Foreign Secretary Boris Johnson faces intense pressure over disparaging remarks on the niqab, self-proclaimed Muslim liberals in the west speak forcefully in favor of banning the niqab on grounds of liberating women, as well as resolving security fears.

At the heart of the Islamistsâ€™ belief in veiling of various types is the concept of â€œawrahâ€� or (Ø¹ÙˆØ±Ø©) in Islam. Awrah is defined as the intimate or indecent parts of the body that must not be exposed. Liberal Muslims have viewed awrah for men or women to be the parts that a typical swimsuit would cover, while more conservative Muslims have interpretations of awrah for women expand to the necessity of long sleeves and covering the legs below the knees, nearly to the ankles. Salafi and Islamist Islam goes further, viewing womenâ€™s hands, feet, even voice to be awrah and also requiring the outer outline of a fully covered womanâ€™s body to be non-distinguishable. As such, depending on the interpretation, a womanâ€™s hair and face can be perceived as awrah.

Islamists argue that veiling affords women freedoms, and a woman can then use the powers of her soul and mind rather than being perceived as a mere commodity that men desire for her sexuality. Anti- Islamists view the arguments for covering as patriarchal subjugation of women and accuse the Islamists of objectifying women to the point that their existence and freedoms don’t matter.

Some tribes in pre-Islamic Arabia practiced infanticide of girls; newborn baby girls were buried alive for fear that they may ultimately dishonor their families. Islam prohibited this abhorrent practice, yet an awrah definition that keeps the woman alive, but hidden away and isolated for fear of dishonor, may be a throwback to similar concepts. Keeping women alive would have the advantage of using their services in endless chores including sexuality and reproduction.

Other ancient people held similar misogynic views that treated women as a fundamentally lower form of human beings. The resurgent Roman Empire under Augustus, over 2000 years ago, saw the introduction of a body of laws focusing on the purity of women. Before the Romans, the ancient Greeks saw women as lesser creatures perhaps best exemplified in the myth of Pandora â€œa bringer of unhappiness and vicesâ€�.

Islam and Christianity are essentially the two remaining monotheistic religions in Egypt where Hala Shiha hails from. Both rely on a broad body of religious sacred texts and doctrines formed over hundreds of years; both traditions have been heavily influenced by the cultural environments from which they emerged. Both also offer texts that speak of absolute and total equality between men and women yet both also have texts that reduce women to an unequal subjugated status.

In the Bible under 1 Timothy 2:11-15 we find clear direction of the submissive subservient role of women, yet in the West, such texts have largely been ignored and side stepped with many historians arguing that both 1 and 2 Timothy in their entirety are not authentic. Some churches and some Western Christians adhere to these texts and believe that Bible is inerrant, yet other Churches ordain women as priests and bishops. In the West, these are issues of freedom of religion and freedom of worship, but each person has the right to choose their own way.

The massive divide between Islamists and anti Islamists is the result of a similar disagreement over the authenticity of certain texts and the interpretation of other texts. It is a disagreement where each side claims total monopoly on what is true Islam and what is heretical and should be fought and banned. Both sides of the dispute deny the other the right to hold differing beliefs; consequently, the battle lines resemble those over abortion and divorce laws in the West with some important differences. 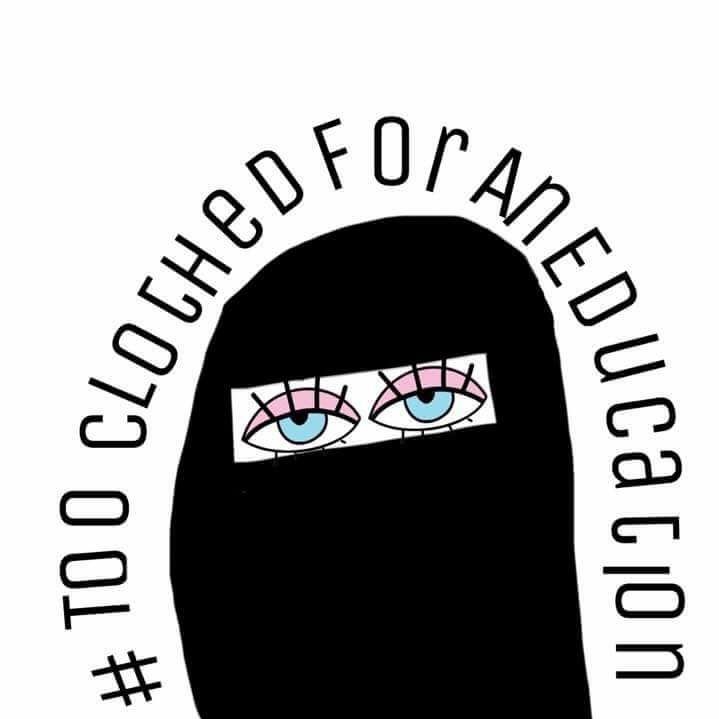 Art work by AUC student to protest the ban on Niqab on campus.

In the West, anti-Islamist Egyptians and others have been supportive of the niqab ban in France and actively advocate for similar bans in the UK, USA and elsewhere. Part of the argument they use is security but, in the process, they ignore important western values such as the rights to privacy and anonymity, the right to be let be.

There are certain transactions where people are expected to disclose their identities, in exchange for certain benefits (e.g. a lower price) in return. For example a woman in niqab who wants a monthly bus or metro pass will have to agree to show her face or use a fingerprint reader to confirm that sheâ€™s not using someone elseâ€™s pass. This is exactly what happens with ski resort season passes where users in ski masks maybe required to prove their identity. Although, users of the more expensive one day ski lift passes are not required to show proof of who they are and can proceed with ski masks on.

In the US, courts have held that transport authorities may not keep track of who is using the electronic road tolls even though these are tied to credit cards. Tolls authorities have had to devise methods to grant anonymity to the users. Yet, anti-Islamists in the West wish to ban women from wearing the niqab in the name of freedom and, failing that, in the name of security.

While I abhor the niqab and what it stands for, I cherish the freedom of choice and the rights to privacy and anonymity. The niqab in the West must be a matter of personal choice and personal freedom for adult women, the power of the law must be there to protect children and to ensure that no woman in the West is forced to wear the niqab against her will. The case of Hala Shiha demonstrates that a well-educated woman, for whatever reason, can elect to defy her family and to wear the niqab and she must have the freedom to do so.While women in the West have more freedom as to how to exercise and express their religion, that is not the case in countries like Egypt and most Islamic countries. 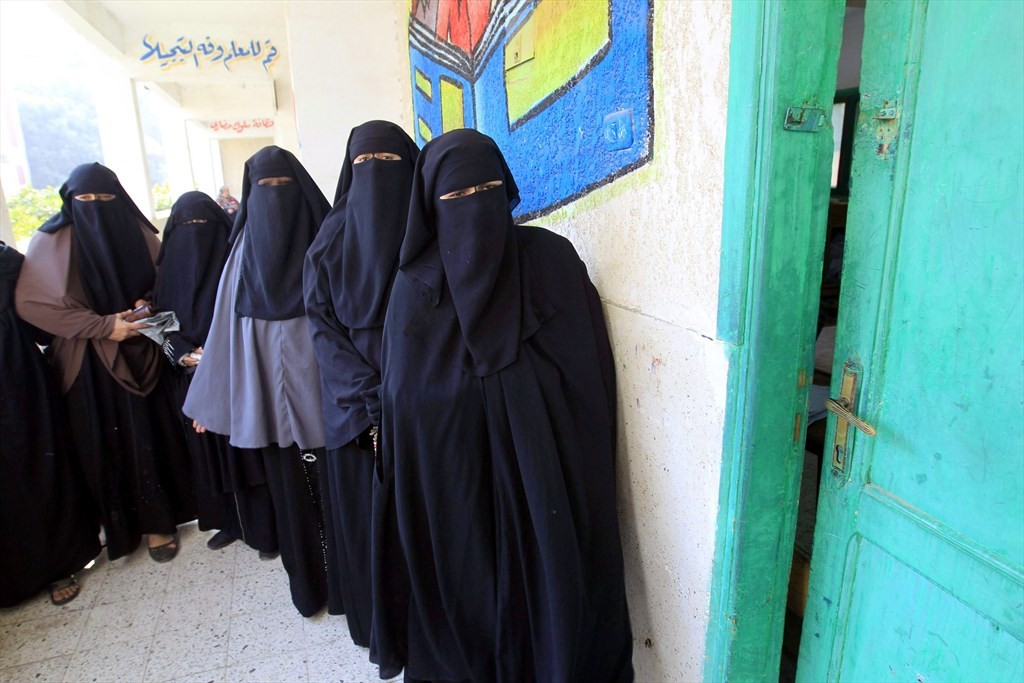 Niqab-clad women line up to vote during a 2014 election. Credit: Mohammed Abed/AFP

An all-out war for what is true Islam has been raging and there is a heavy price to be paid by the losers. In Iran for example, all women have been forced to wear a head covering. In Afghanistan and various Dashlands, women were forced to wear the niqab, freedom of choice was not on the menu. In a country like Egypt, there has been no law requiring the head veil, but it has become a societal norm, reversing decades of â€œliberalizationâ€� in the middle of the last century. In todayâ€™s Egypt, non-veiled women appearing before a judge must be veiled; it is unclear if this has become a custom or is actually a legal requirement. The niqab has become widespread in some parts of the Egyptian society and women who are not in a niqab can face heavy social pressure.

So, while I take a strong stance in protecting the rights of women in the West to wear a niqab, if they so choose, I have a lot of sympathy for efforts to outlaw the niqab in Egypt and in other Muslim majority countries. Countries like Egypt have one official Islam that is recognized by the state and the scope of deviation from what is officially sanctioned is rather limited.

I hope that, over time, the anti-Islamist camp will transform itself into a truly liberal camp, so that when defending freedom of religion and choice and standing up for women rights, it does not deny others freedom of religion and freedom of choice. Muslim anti-Islamists in the West in particular, would benefit from looking at how battles for freedoms in the West have been won: they have never been won through denying others the right to make their own choices.