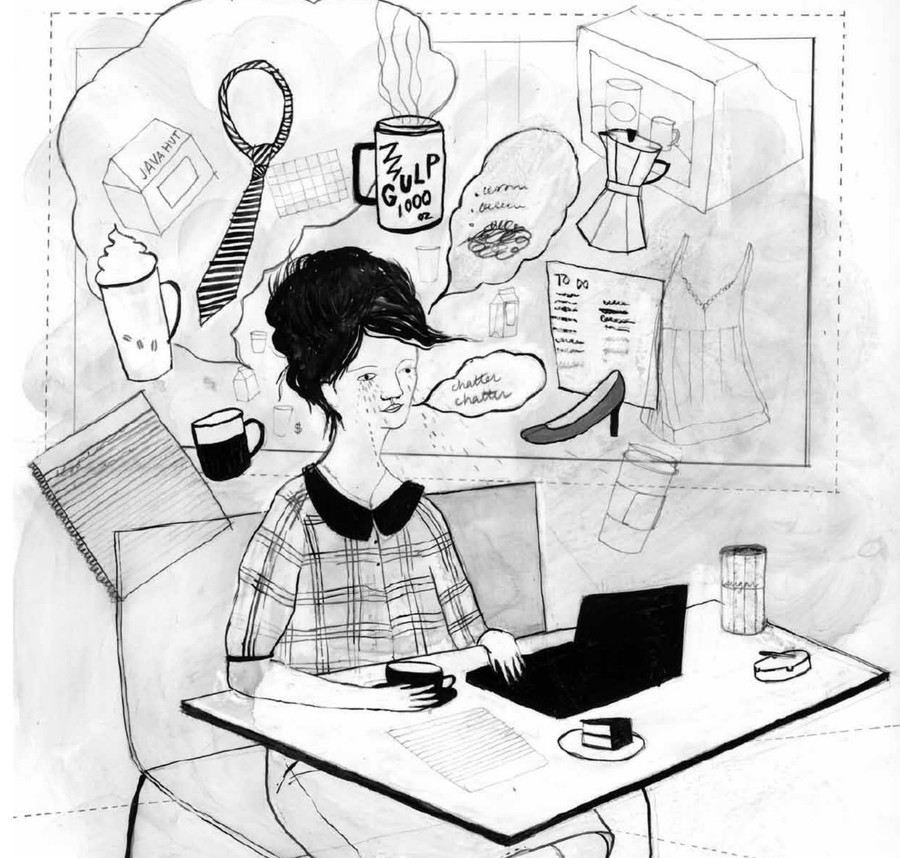 This article appears in our 2008 Spring issue, Wired. Subscribe today!

Caffeine is the worldâ€™s most popular behavior-altering drug. Its consumption forms a huge part of mainstream cultureâ€”whether in the form of a suburban hostessâ€™ spot of Earl Grey, the workplace coffee machine around which gossip is exchanged, or the neighborhood coffee shop where friends (or, indeed, Friends) hangout. Caffeine is the harmless pick-me-up that helps working stiffs be productive breadwinnersâ€”yet it simultaneously plays a countercultural role. In the past, it was black coffee that fueled the wild nocturnal adventures of beatniks and existentialistsâ€”nowadays, that role is filled by clubbers wired on Red Bull and college kids hopped upon Adderall and caffeine pills. And at a time when smokers are literally left out in the cold, there is no other drug to which itâ€™s so socially acceptable to be addicted.

Ninety percent of American adults regularly consume caffeine in one form or another, and another 5 percent use it occasionally, according to a 2005 survey in the Journal of the American Dietetic Association. The figures are roughly equivalent in most industrialized countries on the planet. Caffeine consumption is more or less equal in men and women, although because women are on average physically smaller than men,the same quantity of caffeine is likely to have a greater effect on their bodiesâ€”they may be drinking the same amount as men but, in theory at least, theyâ€™re getting more wired. But caffeine consumption has implications that go far beyond the physical. Like pints of beer and whiteâ€”wine spritzers, caffeinated beverages are deeply gendered in Western culture, each one toting some stereotypes along with its mood-altering properties. After years of processing coffee, tea, and cola on screens and in advertisements, chances are that the way you choose to get your daily fix says a lot about, first, the type of person you are, and second, what popular culture expects from you.

Letâ€™s start with the age-old battle between coffee and tea. Overall, according to the 2003 book Beverages in Nutrition and Health, edited by Ted Wilson and Norman J. Temple, men and women consume both tea and coffee in similar quantities, and liking one doesnâ€™t preclude liking the other. But you wouldnâ€™t know that from the way these beverages are portrayed in pop cultureâ€”as antagonistic forces of light (tea) vs. dark (coffee), and as potions that confer a rigid identity upon their users. When you see a tea-drinking man in a movie or TV show, for instance, heâ€™s invariably coded as prissy, intellectual, gay, or English, if not all four at once. Weâ€™re talking Frasier and Niles Crane, Buffy the Vampire Slayerâ€™s Rupert Giles, and Star Trekâ€™s Captain Picardâ€”men who are invariably catnip to the ladies, but who fall short of fitting a classically masculine mold.

In contrast, pop culture has long offered up a wealth of coffee-quaffing as a signifier of robust, red-blooded masculinity. Agent Cooperâ€™s signature addiction to â€œdamn fine coffeeâ€� in David Lynchâ€™s Twin Peaks signaled that, despite his neat appearance and persnickety ways, Cooper was a take-no-crap working man. Ian Fleming managed the same trick when he had James Bond, that most English of action heroes, despise tea. Coffeeâ€”especially strong, black coffeeâ€”is coded as unquestionably masculine. Itâ€™s fuel for a hard dayâ€™s work; it inspires physical and mental intensity and is the drug of choice for anyone who needs to work hard or play hard. And the more you drink, and the stronger you take it, the more of a man you are.

When, amid the macho banter in Reservoir Dogs (â€œdick, dick, dick, dick, dick…â€�), Mr. Pink insists, â€œWhen I order coffee, I want it filled six times,â€� heâ€™s trying to emphasize his masculinity. Similarly, the Ã¼ber-male mobsters in The Sopranos are forever drinking coffee (especially espresso, a beverage that connects them to their Italian roots). But in Tony Sopranoâ€™s world, coffee signifies more than just maleness. Early in the showâ€™s run, Tony begins bringing coffee to his sessions with psychiatrist Dr. Melfi. A cup for him, one for herâ€”itâ€™s a sweet gesture that becomes a symbol of his growing attachment to her. And itâ€™s no accident that itâ€™s coffee Tony chooses. After all, whoever invited the object of their desire up for tea?

In one episode of Seinfeld, Georgeâ€™s date asks if he would like to come up for coffee. He declines, explaining that caffeine keeps him from sleeping, then later slaps his forehead, realizing his mistake: â€œâ€˜Coffeeâ€™ doesnâ€™t mean coffee! â€˜Coffeeâ€™ means sex!â€� Even in same-sex relationships, the masculine-feminine binary is assumedâ€”in the now-classic lesbian indie Go Fish, for instance, hipster dyke Max has to hide her dismay when her crush Ely invites her in for a drink and reveals a kitchen cabinet stacked with boxes of herbal tea.

One of the most blatant examples of the link between coffee and sex was in the long-running, soap operaâ€“style TV commercials for Tasterâ€™s Choice coffee that aired in the early â€™90s, in which it took Sharon Maughan and Anthony Stewart Head (Buffyâ€™s tea-drinking Rupert Giles) 13 â€œepisodes,â€� seven years, and innumerable cups of instant coffee to finally hit the sack. When, in 2006, Bob Dylan devoted one of his earliest Theme Time Radio Hour broadcasts to coffee, the common thread in most of his chosen songs was coffeeâ€™s ability to keep you going all night, through whatever activity you might choose.

Coffeeâ€™s associations with sex and masculinity make it a convenient way to give an otherwise wholesome female character an â€œedgeâ€� in a context where having her smoke cigarettes or down cocktails might offend potential audiences or sponsors. On the much-loved TV quirkfest Gilmore Girls, characters Lorelai and Rory were established as coffee addicts from the very first scene of the pilot episode; entire fan websites devoted to listing the showâ€™s many references to caffeine popped up during its seven-season run. The mother-daughter pairâ€™s caffeine addiction, along with their junk foodâ€“centric diet, acted as a statement that the ladies, so pretty and sassy on the outside, had a complex, driven center; in Gilmore world, coffee was a form of rebellion against the conventional feminine behavior of their fussy relatives, nosy neighbors, and others.

Real-life teen girls have learned to use coffee in a similar way, much as theyâ€™ve always used makeup and cigarettesâ€”to make themselves look and feel more grown-up. At 4 p.m. on a Monday afternoon, a branch of Costa Coffee in suburban London has been colonized by a group of 15- and 16-year-old girls. â€œWeâ€™ve been coming here most afternoons for about a year,â€� 15-year-old Samira tells me, sipping a cappuccino thickly encrusted with chocolate sprinkles. â€œThere arenâ€™t that many places â€™round here to go after school. Only here and McDonaldâ€™s, and McDonaldâ€™s is full of kids.â€� Are these girls addicted to caffeine, then? â€œDefinitely,â€� says 16-year-old Emily. â€œI canâ€™t even get dressed in the morning now until Iâ€™ve had a cup of coffee.â€�

Coffeeâ€™s associations with sex and masculinity make it a convenient way to give an otherwise wholesome female character an â€œedgeâ€� in a context where having her smoke cigarettes or down cocktails might offend potential audiences or sponsors.

The other girls talk over each other in their eagerness to agree, and soon theyâ€™re competing, telling me how many cups they can take, almost arguing over who gets the most wired. So is drinking coffee cool? I ask. The girls roll their eyes and exchange withering looks before Emily answers, â€œYeah, maybe. You always see celebrities holding cups of coffee in photos and it looks coolâ€”like theyâ€™ve been too busy partying to get enough sleep.â€� These girls didnâ€™t strike me as particularly rebellious; none of them had yet drunk alcohol or smoked cigarettes in anything more than an experimental way. Yet their daily coffee drink was their way of telling the world they were party animals at heart.

Interestingly, coffee chains like Starbucks have come to look like the antithesis of hard-edged, black-coffee masculinity. The chainâ€™s cookie-cutter setup is often considered a feminine space, with comfy chairs, baby-changing facilities, and cute slogans like the seasonal â€œPass the Cheer.â€� And itâ€™s interesting to note the amount of flak Starbucks receives from self-confessed coffee snobs for its use of flavored syrups, whipped cream, and chocolate, which are often seen as agents of the feminization of a traditionally macho drink. Indeed, researchers from Middlebury Collegeâ€™s Economics department who did a field study of discrimination in Boston-area coffee shops found that female Starbucks customers were far more likely to order what they described as â€œfancyâ€� coffeesâ€”with extra cream, syrup etc.â€”than male customers.

On the forums at anti-Starbucks website ihatestarbucks.com, one poster, user-named eldobear, rants, â€œI go to other coffee houses and find much better coffee, and you donâ€™t have to wait in line, waiting for those stupid girly drinks. One of the rare examples of a coffee explicitly marketed to women reinforces this idea that coffee needs to be feminized before itâ€™s suitable for female consumption. The â€™80s ad campaign for General Foods International Coffees, a range of flavored instant beverages, featured female coffee klatches wherein the sole topic of conversation was the coffee itself. The different flavors reminded women of important moments in their lives, almost always associated with romance. 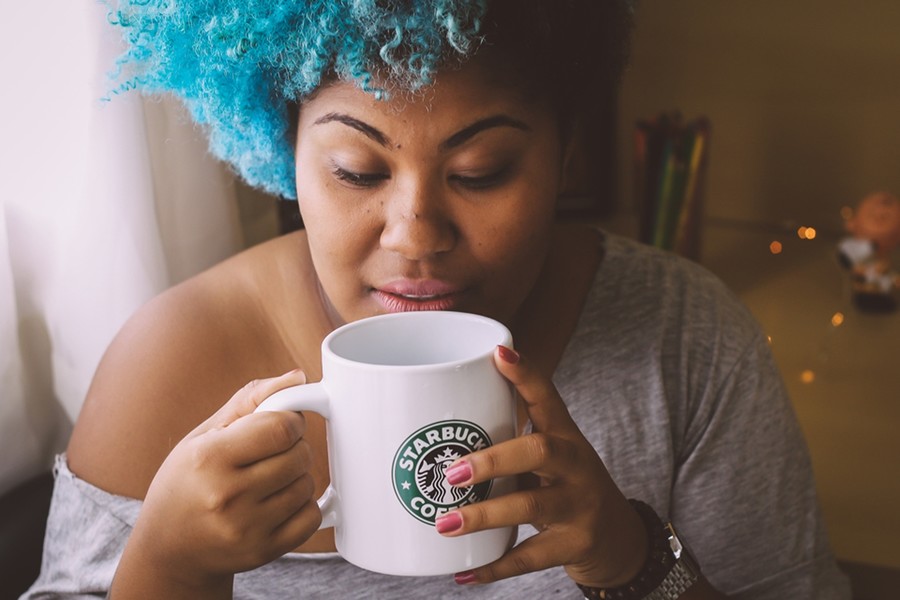 French Vanilla brings back memories of Jean-Luc, the waiter a pair of girlfriends encountered during their youthful trip to Paris, while, in another ad, a lively group of women discuss how best to describe the mint flavor: â€œItâ€™s like when you eat a mint and your boyfriend eats chocolate, and you kiss.â€� A common complaint is that Starbucksâ€™ coffee is not only feminized but infantilized. When the UKâ€™s Guardian ran a 2007 piece praising Starbucks, the discussion on the website got hotter than a cup of crotch-scalding McDonaldâ€™s joe, with many contributors complaining about the weakness of Starbucksâ€™ coffee.

Atypical post complained, â€œThe lattes, caramel macchiatos and what-have-you are all overly sweet and contain such a disproportionately large amount of milk that a child could drink them with no adverse effects. When, in Coffee and Cigarettes, Steven Wrightâ€™s character comes up with the idea of freezing coffee to make caffeine Popsicles for kids, the joke isnâ€™t far from the truth. Michele Simon, director of the Center for Informed Food Choices in Oakland, California has called Starbucksâ€™ more sickly confections a â€œgateway drug,â€� and the number of young adults consuming coffee daily has doubled in the past three years, while childrenâ€™s consumption of caffeine has doubled since the â€™70s.

Itâ€™s not difficult to see why kids have been drawn to consume caffeine. Caffeine culture was everywhere in the late â€™80s and throughout the â€™90s, as Starbucks opened a store a day, schools installed Pepsi-sponsored vending machines, and sitcoms left the bar settings of Cheers for the coffee shops of Frasier and Friends. We all know that, in reality, metropolitan twentysomethings hang out in bars, not coffee shops, but to have Monica and Rachel do this would be, like, so alienating to the showâ€™s teenage audience. In contrast to the Gilmore girls, the characters on Friends are not caffeine addicts, just sociable young people who enjoy slouching in comfy sofasâ€”could they be anymore wholesome? No wonder Emily and her friends thought Costa was the height of sophistication.

These days, with Starbucksâ€™ stock plunging and McDonaldâ€™s now offering its own lattes and mochas, coffee culture seems ripe for a makeover. The next time youâ€™re pondering the menu at your (locally owned) coffee house, do your bit to break the gendered code of caffeinated drinks by confounding expectations: Who says that you canâ€™t wear your daintiest pink dress while ordering a four-shot Americano, extra hot and no room for cream? Or explore the wide range of black teas scented with tropical fruits and flower petals on the day you shave your hair into the perfect boycut? Youâ€™ll be getting your buzz and making the beverage world a little less gendered at the same time.

Helen Davies is a freelance journalist based in London. when she becomes supreme ruler of the universe, her first act will be to ban instant coffee.