Efficient computer vision systems are a critical component of autonomous and assisted driving vehicles, and now a startup that has developed a way to deliver computer vision technology without relying on costly and bulky hardware — by building deep learning software that can run even on low-end processors — has secured a round of funding as it gears up for its first services later this year.

Brodmann17 — named after the primary visual cortex in the human brain — has raised $11 million in a Series A round of funding led by OurCrowd, with participation also from Maniv Mobility, AI Alliance, UL Ventures, Samsung NEXT, and the Sony Innovation Fund.

Brodmann17’s edge technology (necessary for rapid computations) is designed to be used in any automotive application that requires artificial intelligence to see and process objects, roads and wider landscapes, competing with the likes of Intel’s Mobileye, services being developed by other OEMs like Bosch, and some automakers like BMW.

The challenge that all these and many other players in the self-driving industry are tackling is that as cars start to be viewed more as hardware, they are taking on some of the biggest feature challenges ever tackled in the world of tech. Autonomous systems are not only expensive but they consume a lot of energy and take up a lot of space in the vehicle, so everyone is looking for solutions that can be less of a strain in one or ideally all of these areas.

The pitch from Brodmann17 is that its core product essentially does just that: its deep-learning based computer vision technology is designed as a “light weight” solution, which can work even on smaller, low-end processors. (Note: it works on low-end CPUs but not nearly as well as on the faster ones.) 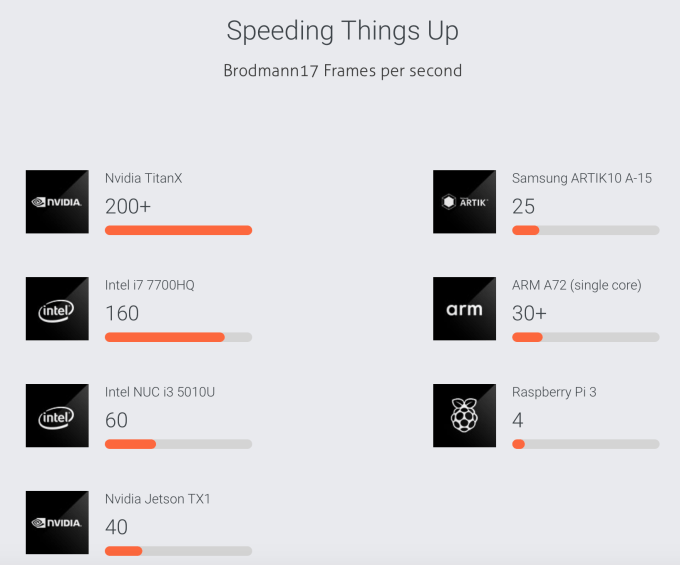 The plan is for Brodmann17’s tech to eventually be a part of fully autonomous deployments,Â but with self-driving vehicles still some years away from being a reality, CEO Adi Pinhas — a deep learning and computer vision specialist who co-founded the company with two other AI scientists,Â Amir Alush and Assaf Mushinsky — said that its first commercial efforts will come in the form of advanced driver assistance systems (ADAS): it’s currently working with a global, tier-one automaker to incorporate its technology into front and rear cameras to make more accurate identifications of still and moving objects when a human is still behind the wheel.

That is not a small fish: ADAS is not only already a key component of many newer vehicles, but its ubiquity and functionality will continue to grow. ADAS systems — which are often supplied in part or entirety by third parties to carmakers — was a $20 billion market in 2017 and is projected to reach nearly $92 billion by 2025.

I first met the founding team of Broadmann in Tel Aviv, where they are based, a couple of years ago, when it was just four guys working in a corner of the Samsung NEXT incubator in the city, showing me the the earliest versions of how its tech was able to sit on small processors and identify with a lot of nuance different small and large objects that are encountered in a typical driving scenario.

Fast forward to today, and the company now has 70 people, mostly engineers, now working out of its own digs, and the startup is continuing to hire as it gears up beyond that early development phase.

Pinhas said that in these last couple of years, he’s seen some interesting evolutions in how the tech world, and the wider automotive industry, have approached the concept of autonomous cars.

On the one hand, everyone is throwing what they can at self-driving, and that will inevitably help accelerate roadmaps for new prototypes and tests. On the other hand, that increased effort is also leading to more pragmatism on just how much work lies ahead and how more elements of self driving might come sooner than full-fledged systems.

“Right now, to me it looks like the market may have taken a step back. Everyone wants to speed up development on autonomous systems, but at the same time I noticed how this year at CES, no one was talking about Level 5,” Pinhas said, referring to the highest level of autonomy in driving services, and the big tech event in January where many of the next big shiny new services get shown off for the first time. “I think the thinking now is, even a working Level 4 deployment would be great. Let’s do that and see how well we can get robo-taxis driving in well-defined scenarios.”

That’s where Brodmann17’s push into ADAS comes in: it gives the company a foothold in future deployments and services while also proving the concept by powering services that are live today.Â

The other interesting development that Pinhas noted is a shift in focus from volumes of training data, to developing smarter neural networks to calculate and understand that data. “It used to be ‘who has more data’, but now everyone has it,” he said. “Now it’s about the algorithms for training. Experts have long thought that neural networks” — designed to “think” like humans — “will solve everything but the key is still figuring out how best to train those networks. Just throwing data at them will not solve this.” Notably, this is an area where Broadmann17 has put focus for some time, “and others are also starting to now.”

Pinhas admits that Mobileye is the most advanced company in the automotive computer vision market today, although we are still at such an early stage of development that there is room for more innovation, and more startups and other large companies to make an impact. This is why investors are interested in Brodmann17, and why the startup has already started working on its next round to supply itself with capital for the next phase.

“We are convinced that Brodmann17 is one of the best deep AI companies out there. The company has a very experienced management team and exceptional technical leadership that has created a major leapfrog in the fundamentals of AI algorithms,” said Eli Nir, Senior Partner atÂ OurCrowd,Â said. “Brodmann17â€™s technology opens the doors for low computation implementation of AI â€“ significantly lowering cost, complexity, and price, and can be used over many sectors and industries. We are very excited to lead this round and take part in the future success of the company.â€�