It has been a really hard few weeks for marginalized baseball fans. While itâ€™s always kind of hard to love a sport, players, and culture that all-too-often donâ€™t love you back, it has felt even harder recently as bigoted tweets from players resurface over and over again. In the aftermath, weâ€™re left with reeling fans who are harmed by the words, athletes trying desperately to apologize, and the (mostly white and male) sports media working overtime to let the players off the hook. But the people who are directly hurt by their favorite playersâ€™ cavalier tweets are saying that their apologies arenâ€™t enough and players, teams, and media members need to do better.

It all began back on July 17 during the MLB All-Star Game when Milwaukee Brewers pitcher Josh Hader was on the mound. Heâ€™d been having a breakout season, and the 24-year-old reliever, who grew up near Washington, D.C. where the game was being played, had family in the crowd. By the time he left the moundâ€”after giving up a three-run homerunâ€”his name was known for very different reasons. Tweets had been found from 2011 and 2012 in which the then-17-year-old Hader had written an assortment of racist, homophobic, and misogynistic thoughts and slurs, including â€œkkk,â€� â€œwhite power,â€� and â€œI hate gay people.â€�

Hader later apologized in a press conference for what he chalked up to a youthful mistake. â€œIâ€™m deeply sorry for what Iâ€™ve said, and it doesnâ€™t reflect any of my beliefs going on now. I was young, immature, and stupid, and thereâ€™s no excuses for what was said or what happened.â€� He also blamed rap lyrics. His teammates rallied behind him, likely because they had little choice in the sport where presenting a unified front is valued above all else, and he received a standing ovation in his first home appearance after the scandal. White baseball writers, like Jon Heyman (who blocked me and other female sports writers after we took issue with his coverage of domestic violence allegations against players), bent over backward to excuse him, writing that the tweets â€œshouldnâ€™t ruin his lifeâ€� and calling the then-17-year-old Hader â€œa child.â€�

Itâ€™s worth noting that the person who posted Haderâ€™s tweets is a 16-year-old white kid, who told the Associated Press, â€œIâ€™m younger than he was at the time, and no one would ever see anything like that from me. Itâ€™s horrid.â€� Then, this week, more tweets surfaced from Atlanta Braves pitcher Sean Newcomb and Washington Nationals shortstop Trea Turner that contained racist and homophobic slurs. They, too, scrambled to issue apologies and assure the public that their tweets were not representative of their views, or the people they were today. The media has rushed to ask their teammates of color to speak about them without recognizing the systemic barriers and racism that exists in their own clubhouses that might preclude them from saying anything other than what a great guy the offending player is.

But all three of these apologies are lacking, and even my 4-year-old could tell you why. Because a real, true apology comes with actionâ€”a demonstration of how youâ€™re going to do better and be better. Thereâ€™s a song on the PBS Kids show Daniel Tigerâ€™s Neighborhood that tells kids, â€œSaying sorry is the first step.â€� The next step is asking, â€œHow can I help?â€� In our house, I teach my kids a three-part apology: 1) saying youâ€™re sorry, 2) explicitly saying what youâ€™re sorry for, and 3) asking what you can do to make it better.

Most of the athlete apologies vaguely refer to â€œoffensiveâ€� tweets or words, but donâ€™t use words like â€œhomophobic,â€� â€œracist,â€� or â€œmisogynist.â€� Instead, they skirt around naming their offense. They often apologize to their teams or their organizationsâ€”Turner initially apologized for bringing â€œnegative lightâ€� onto himselfâ€”but they never apologize to the people, fans, and communities they hurt. People like Jenn Rubenstein, a Nationals fan who tweeted at Turner about the impact his words had for them:

â€œThose words you used?… You knew what they were. You knew what they meant. You may not have thought you meant it *that way,* but in the end your intent doesn’t really matter,â€� Rubenstein wrote. â€œIf you run over my foot, but you didn’t *mean* to, that doesn’t make my foot less broken, or make it hurt less. An apology, a real one, wouldn’t fix itâ€”but it would help. (By â€œrealâ€� I mean acknowledging pain you caused, *even inadvertently,* [and] how youâ€™ll do better.)â€� (Rubenstein has also been donating money based on the statistics of athletes who have made homophobic comments through their Twitter account @queerfancystats.)

To his credit, Turner issued a much better apology the next day, specifically apologizing to the â€œLGBT, African-American, and special needs communities.â€� He also apologized to the fans that were hurt: â€œA lot of fans had been sharing their thoughts in the last few days and Iâ€™ve had a chance to read a few of them. I think thatâ€™s where it is most affected by what I said and I want to apologize to those people.â€�

But none of these players have said how they plan to show theyâ€™re sorry, and none have faced any disciplinary action from their teams or Major League Baseball itself. Hader was ordered to attend sensitivity training with Billy Bean, MLBâ€™s vice-president for social responsibility and inclusion, and Newcomb and Turner will meet with him, too. In the past, Bean, who is gay, has been used to help defend offending playersâ€”a blog post earlier this season by a fan named Andrew, noted that in media coverage from The Athletic that followed Toronto Blue Jay Kevin Pillarâ€™s on-field use of a gay slur last season, â€œBeanâ€™s personal support of Pillar is used as a kind of Gay Balm for the sportâ€™s persistent homophobia.â€�

But what about reaching out to the fan communities and donating their time or some money to an organization doing work with marginalized people? In Turnerâ€™s case, it would be quite easy. His teammate, Sean Doolittle, works with the D.C.-area organization, SMYAL, to support LGBTQ youth. Taking accountability and showing sincere remorse requires action, and demonstrably showing that you plan to make it right. Otherwise, the words ring hollow. Turner seems to know that, and a column in the Washington Post said that, going forward, â€œhe is trying to determine the best way to demonstrate that growth, to use his platform for good instead of the hurt he caused with those tweets.â€�

Itâ€™s a continuation of the message women are constantly receiving from the sports world: You donâ€™t belong here; this space is not for you. Weâ€™re constantly being reminded that we donâ€™t matter.

In Pillarâ€™s case from last season, he donated his salary from the two games he was suspended to a LGBTQ organization; but as Andrew noted in another post, â€œThatâ€™s not charity, but punishment. The result is the same, money going to LGBTQ ally organizations, but it doesnâ€™t reflect growth on Pillarâ€™s part.â€� And the following year, a white, cisgender, heterosexual baseball writer wrote about his redemption and growth process a year later. The piece centered Pillar, and how hard the experience was for him, like Heymanâ€™s column centered Haderâ€™s feelings following the discovery of his tweets.

The pain that professional athletes like Pillar and Hader experience as a result of their own words is nothing compared to the impact those words have for the communities they were directed toward. Letâ€™s be clear: These athletes are white, rich, and, as Doolittle tweeted, â€œhave been at the top of the food chain since high school.â€� Nothing anyone can say to them can really hurt them. In contrast, the impact for marginalized people affected by their words is very real: according to the Trevor Project, lesbian, gay, and bisexual youth contemplate suicide at almost three times the rate of straight youth and are almost five times as likely to have attempted suicide.

Each episode of homophobic harassment or abuse more than doubles the likelihood of self-harm. Black Americans are subjected to police violence and mass incarceration, being incarcerated at more than five times the rate than white Americans are. One in six women will be the victim of sexual assault in her lifetime, according to RAINN. 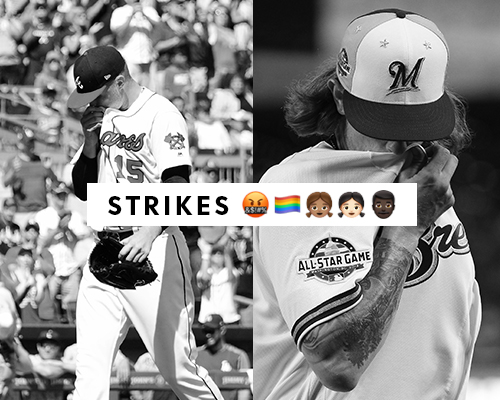 These statistics give a face to what can seem like a victimless offense of sending random teenage thoughts into the Twitter void because itâ€™s very likely that these players donâ€™t see themselves as bigots, and their comments, as their apologies attest, â€œare not representative ofâ€� who they are today. But there is a very real cultural problem that lets white, teenage boys think their words arenâ€™t hurting anyone and that â€œitâ€™s not serious,â€� because their words arenâ€™t hurting people like them. Since they will never know what it feels like to have a slur hurled their way or to experience violence as a result of their identity, they also donâ€™t understand how serious these words really are.

Itâ€™s clear that a cultural shift needs to happen. The solution is not, as some people have suggested, to make sure that professional athletes scrub their profiles when theyâ€™re drafted. As Dr. David J. Leonard, author of Playing While White, noted on Twitter, â€œThe calls for white MLB players to â€˜scrubâ€™ or â€˜clean upâ€™ social media to get rid â€˜evidenceâ€™ of racism, sexism and homophobia is emblematic of our collective refusal to address root issues all while focusing on etiquette and simply performing equity, diversity [and] inclusion.â€� And, as Barry Petchesky pointed out at Deadspin, there is value in public shaming, and hopefully some teenage boys are learning from their favorite athletesâ€™ falls from grace.

Even still, for the people hurt by their words, moving on will never truly be an option. As a queer woman, I will remember their words every time they step on the field, a reminder that baseball isnâ€™t supposed to be for people like me.