China’s payments heavyweights have been following tourists abroad as their home market gets crowded. Ant Financial, Alibaba’s financial affiliateÂ with a said valuation of $150 billion, now sees its virtual wallet Alipay handling transactions at 3,000 Walgreens stores in the U.S. and is eyeing to reach a roster of 7,000 locations by April.

The alliance will make it breezier for Chinese tourists eager to pick up vitamin supplements and cosmetics from the pharmacy giant, doing away the hassle of carrying cash around. There’s also an economic incentive as Alipay and its payments peers typically charge lower foreign transaction fees than credit card firms.

Walgreens products are already available to Chinese shoppers through Alibaba’s Tmall online marketplace, which connects customers to brands. It competes with JD.com to bring high-quality overseas products to the country’s increasingly demanding consumers.

According to a Nielsen report released last year, more than 90 percent Chinese tourists said they would use mobile payment overseas if given the option. Digital payments have become a norm in China’s urban centers and top policymakers are planning to replicate that cashless ubiquity among rural villagers by 2020, announced a set of new guidelines this week.

Ant Financial is continuing its aggression in North America despite a major fiasco last year when the U.S. governmentÂ killed its $1.2 billion plan to buy money transfer firm MoneyGram, a deal that could boost Ant’s global remittance capability. Within the American borders, Ant has tapped into its partners’ retail networks. By March last year, Alipay was accepting money across 35,000 merchants through its tie-up with local payments processor First Data. 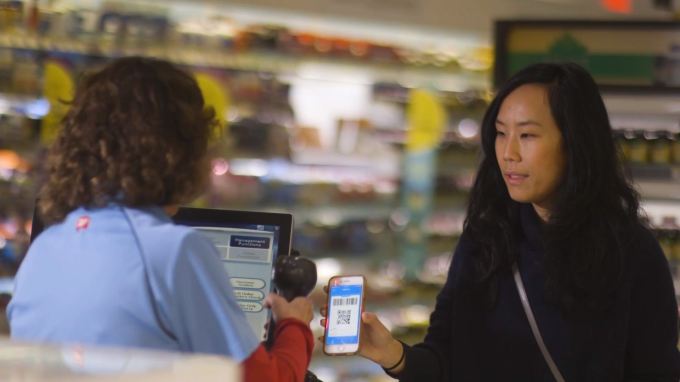 Alipay is currently available at 3,000 Walgreens stores in the U.S. / Photo: Ant Financial

Digital payments are especially popular with first-time outbound tourists, many of whom hail from smaller Chinese cities and may not own international credit cards. According to a recent report published by Ant, the number of people from third-and-fourth-tier cities who used Alipay abroad was up 230 percent during this past Lunar New Year.

Alipay’s big push into North American also includes its foray into Canada. In one instance, diners in Vancouver, Calgary and Edmonton — destinationsÂ that draw a lot of Chinese tourist and students — can now use Alipay to order food and skip restaurant lines. The setup comes from a deal between Ant Financial and Canadian food startup ClickDishes.

Alipay’s archrival WeChat Pay has also flexed its muscles overseas. To chase after Chinese tourists, the Tencent-owned wallet recently pushed into Japan through a partnership with chat app Line.Â In Hong Kong and Malaysia, WeChat has attempted to get a slice of the indigenous payments market by running localized versions of the wallet and luring users with money.Â During Lunar New Year, WeChat PayÂ shelled out millions of digital hongbao — red packets filled with cash traditionally handed out during the festive period — to users in these two regions.

Correction: Ant Financial was reportedly valued at $150 billion, not $100 billion.

CEO of Rappler, a media company critical of the Philippines government, is arrested Tesla ‘Dog mode’ and ‘Sentry mode’ are now live to guard your car and pets