A little known Chinese bike company is riding into Europe as its peer Ofo has applied the brakes to its global expansion strategy in recent months.

Youon, which gets by manufacturing public bikes for city governments across China, has formed a joint venture with UK-based bike-sharing startup Cycle.land, it says in a statement. The deal allows the Chinese firm to sit back in its headquarters in eastern China while its British partner deploys its bikes and takes care of on-the-ground operation.

Youon’s fleet of 1,000 public bikes will start appearing in London next March, making the UK the fourth country in its international expansion after Russia, India, and Malaysia.

Youon’s name may not ring a bell, but its subsidiary Hellobike is increasingly turning heads as its dockless bikes win over users in China’s smaller cities where its larger rivals Ofo and Mobike lack a presence. This is in part thanks to Hellobike’s partnership with its investor Ant Financial, Alibaba’s financial affiliate, which lets users skip Hellobike’s standalone app and access the service on Ant’s Alipay wallet, which has over 500 million MAUs.

While Hellobike’s mobile penetration recorded a 20 percent month-over-month increase (link in Chinese) in September, Mobike and Ofo barely saw any growth in the same period, according to data service provider Jiguang.

Away from home, Youon’s partnership approach is also noticeably different from that of Mobike and Ofo, which have chosen to run their own overseas operation. Teaming up with local players gives Youon insight into customers abroad, suggests market research firm Analysys.

“User behavior in Europe and North America is very different and it will be reckless for a [Chinese] firm to abruptly set up its own operations overseas,” Sun Naiyue, an analyst at Analysys, tells TechCrunch. 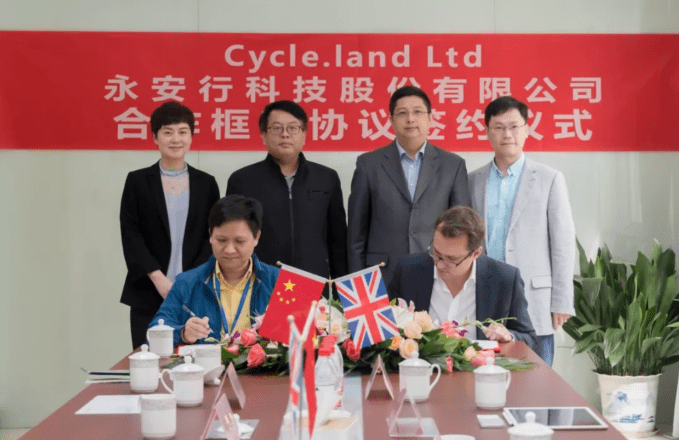 China’s YouonÂ partnered with peer-to-peer bike-sharing startup Cycle.land to expand to the UK [Image via Youon]

Having a local ally also helps Youon avoid government protectionism and regulatory meddling in the foreign market, Sun adds. London has already greenlighted the company to place bikes in the city and the company will “follow local demand and rules to deploy bikes accordingly,” Cycle.land says of its partner.

Contrasting the prospects of Youon’s latest push is the bleak outlook of its peer. The past few months have seen Ofo retreat from its overseas markets to prioritize profitability. To date, Ofo has shut down in Australia, Austria, Czech Republic, Germany, India, Israel, and scaled back operation in a host of other countries.