Early-stage startups throughout much of the U.S. are able to raise larger sums today than any other point in at least a decade, and there are more early-stage rounds than ever, both in North America and globally. (Note: â€œEarly-stageâ€� is defined here as Series A and Series B rounds, plus smaller rounds from several other round types, including equity crowdfunding and convertible notes.)

In analysis published earlier this week, we found that the nationwide average early-stage deal grew more than 20 percent between 2017 and 2018. We quantified that companies on the coasts raise more than their inland counterparts and found some indications that the Midwest lags the rest of the nation.

To find this and more, we aggregated round size data for more than 30,000 early-stage venture rounds struck with U.S.-based companies between the start of 2008 and the end of 2018. We segmented the data by theÂ U.S. Census Bureauâ€™s map of regions and â€œdivisionsâ€�Â (basically, subregions by a different label), took the mean (average) early-stage deal size for each calendar quarter and displayed each region against the national average.

Below, you can see how early-stage rounds around the country compare to the national average. To make it easier to see trends, we display a two-period simple moving average line alongside individual data points. 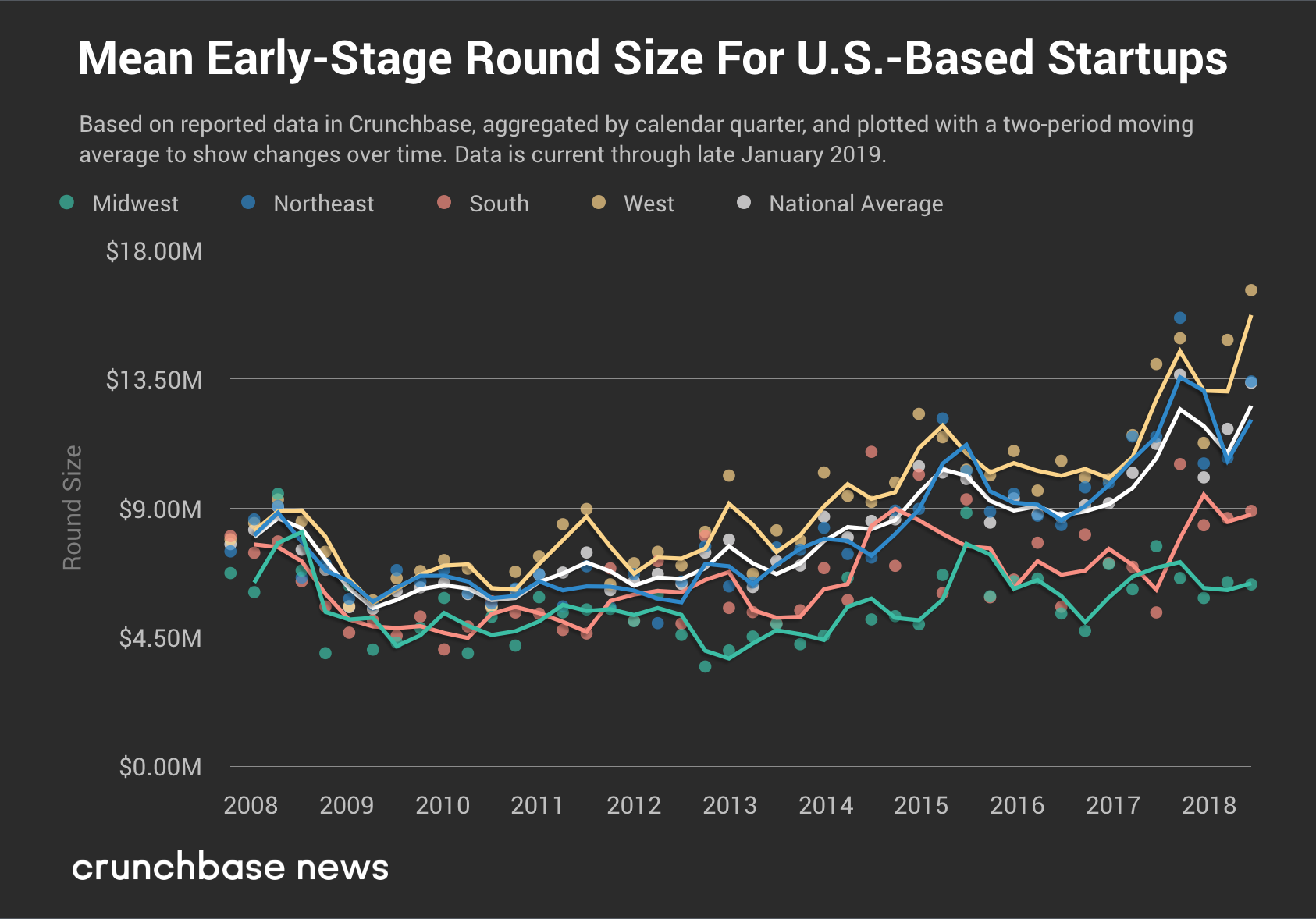 Although the average has certainly crept up, part of that is attributable to a newer trend in companies raising huge sums of money. In the report, we indicated that many of the largest early-stage rounds were raised by companies in the West and Northeast. But startups in these regions donâ€™t hold a monopoly on raising lots of money from venture capitalists.

Here, we wanted to highlight some of the biggest early-stage rounds struck by Midwestern and Southern companies. After all, the coasts tend to dominate the mediaâ€™s conversation concerning tech. So, hereâ€™s some love for the middle of the country, and its biggest deals:

Itâ€™s true that the Bay Area is responsible for a huge chunk of theÂ supergiant venture market, but it by no means accounts for all of it. The above should lay to rest the idea that thereâ€™s no tech in between EWR and SFO.

Learn to retain and read more with this speed-reading software [Deals] Watch the tech-centric Super Bowl ads from Amazon, Microsoft and others