If you could travel back to any historical period and spend a day there, which era would you choose? For the rich and privileged people who inhabit HBOâ€™s Westworld, itâ€™s any era where they can enact a colonialist fantasy, whether itâ€™s the Old West, colonial India, or an Orientalist vision of feudal Japan. Westworld fetishizes bygone eras for audiences on both sides of the screen: Viewers devour nostalgic shows like Downton Abbey and Hell on Wheels, set in a richly imagined past, and the characters in Westworld do the same.

By design, the world of Westworld is troubling: Billions of dollars have been poured into constructing an Old West landscape populated by robotic â€œhostsâ€� with exemplary programming, giving an â€œauthenticâ€� experience for the visitors able to pay the price of admission. That experience includes the ability to kill hosts in frenzied fantasy bloodbaths, or to rape with impunity. It is the lifelike, highly realistic responses of the hosts that makes this cruelty so appealingâ€”theyâ€™re â€œalmost like people,â€� in the same way that many colonialists viewed Indigenous peoples. Why create an imagined world that fetishizes this kind of abuse? Where is Jane Austenworld or Medieval Franceworld?

Westworld could offer rich metacommentary about white supremacy, nostalgia, and longing for a lost causeâ€”or The Lost Cause, in the case of Civil War worshippers. After all, pop culture is ripe for these narratives since thereâ€™s a steady conversation about diversity and inclusion, what we value in entertainment, and the role of white supremacy in larger cultural forces. But instead of being an authentic exploration and critique of white supremacy, Westworld only enforces it. It also shows the worst parts of humanity as guests engage in an orgy of slaughtering Indigenous people, raping women, and shooting hosts for the pleasure of watching them die.

In the very first episode, viewers see an implied rape, and the undertone of the scene is that it doesnâ€™t really matter because Dolores Abernathy (Evan Rachel Wood) will be reset afterward. The carefully constructed vision of the West reflects what white, wealthy guests might want to see; submissive sex workers, easygoing cowboys, and some dark-skinned Confederados to round it off. And, of course, thereâ€™s the sinister and mysterious Ghost Nation, a generic Native American tribe that engages in acts of random, sometimes incomprehensible violenceâ€”the nature of which is only explained far too late.

Of course, Westworld touches upon the usual themes associated with settings like this. There are questions about class and culture, with mostly white, wealthy guests streaming to Westworld; conversations about the blurring of human and machine as Mesa Hubâ€™s technicians begin questioning their work; and warnings about how technology can erode privacy as Westworldâ€™s sinister purpose is revealed. As the worldbuilding expands, we learn about the Raj, another park painstakingly tailored for the pleasure of visitors. Instead of evoking Manifest Destinyâ€”and a battle for the West that has never truly ended, as illustrated by the white separatists who still believe they have an intrinsic right to the Westâ€”it takes us halfway across the world, to the muggy jungles of India.

Guests can visit elaborate colonial mansions for fanciful teas, trek through the wilds while Indigenous hosts carry all their supplies, and hunt wild animals much like their counterparts in the West hunt people. This, too, is a lascivious commemoration of some of the worst parts of our history, presented as a real-life manifestation of a BBC drama. Or visitors can go to Shogunworld, set in feudal Japan. Itâ€™s not enough for Shogunworld to be filled with meek Japanese women happy to do the bidding of white men but those same white men have opportunities to mow through untold hordes of Japanese swordsmen, much like playing a video game.

Delos, the company who creates these worlds, pitches it as deliberately ultraviolent. Itâ€™s dehumanizing, and should remind viewers of the aggressive anti-Japanese propaganda used during World War II, when white soldiers and sailors took grisly trophies from downed Japanese airmen and soldiers. The creators of Shogunworld have so little respect for the culture theyâ€™re profiting from that they program hosts in this landscape with the exact same stories used in Westworldâ€”insert Japanese dialogue here. 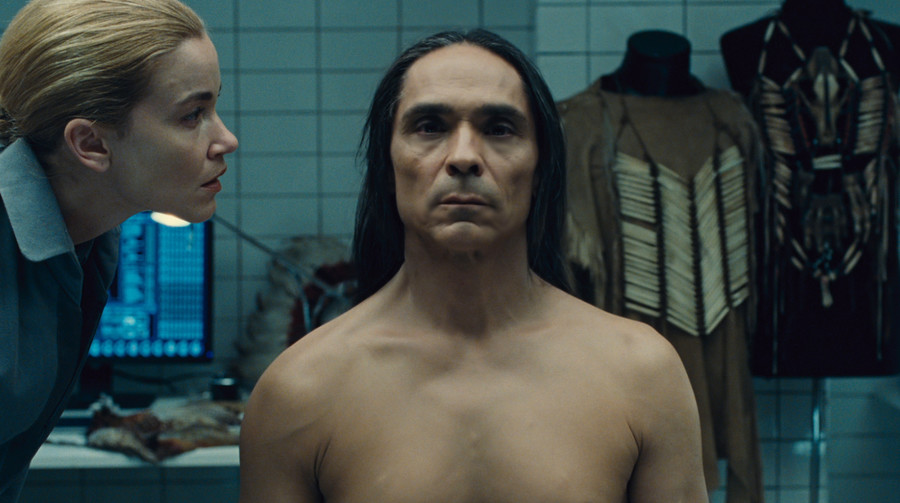 The denizens of all three worlds are subjected to violence and trauma, over and over again, in service of their white masters. Their memories are erased, over and over again, but the damage lingers as some characters begin to grow self-aware. This grand experiment comes at a tremendous cost to the hosts being used like chess pieces to fulfill masturbatory fantasies. While the show positions the conditions in the various worlds owned by Delos as problematic, when the uprising comes, itâ€™s engineeredâ€”people come to consciousness as a result of programming by white men, performing in a different type of puppet show. Even the rebellion is racialized.

Dolores, the architect of rebellion who turns villain, is a wholesome white farm girl; Maeve (Thandie Newton), a Black woman with an arguably much more interesting history, is caught in a self-reflexive PTSD loop, searching for a lost daughter and reliving her death over and over again. Even their â€œallyâ€� on the inside, a Black man named Bernard Lowe (Jeffrey Wright), turns out to be a host whoâ€™s programmed to be digital replacement of a dead man and used as a sort of â€œmagical Negroâ€� filled with in-depth knowledge of the park. The characters of Westworld follow fixed narrative tracks, and so too does the show itself, retreading old, troped ground rather than daring to rebel. In the third season, Westworld is breaking out of its walled garden, with multiple hosts on the loose on the outsideâ€”their escapes enabled, it would appear, by the companyâ€™s own head of security. This could be an opportunity for Westworld to think outside itself, but itâ€™s hard to imagine how it could effectively redeem itself with the narrative itâ€™s created.

As a show filled with mysteries and sudden twists and beautiful scenery, Westworld appears highly successful. But as a show exploring deeper issues, so far, itâ€™s a failure, which is disappointing because itâ€™s also a failure of storytelling. Pushing the limits of the viewerâ€™s imagination is an integral component of transformative television. What better a twist than an unexpected deep cut into what we think we know about ourselves?