This week, point-to-point â€œmicrotransitâ€� service company LimeÂ announcedÂ it raisedÂ $310 million in a Series D round, which valued the company at $2.4 billion, post-money. That is pretty impressive for a startup founded just a couple of years ago. Since 2017, Lime has raised more than $765 million in venture funding, which is due in part to the pretty daunting economics of the bike and scooter business. It takes a lot of capital to acquire and deploy that hardware.

Lime isnâ€™t the only company to raise supergiant ($100 million or more) VC rounds right out of the gate. Despite the fact that supergiant venture capital rounds have recently becomeÂ an almost everyday occurrence, the age at which companies close their first nine-figure funding deal hasnâ€™t really changed over the past several years.

In the chart below, we plot the distribution of startupsâ€™ age at the time of their first supergiant venture round of $100 million or more. (The age of a company at any subsequent supergiant round was excluded.)Â In prior reporting, we found that supergiant deal volume began accelerating in 2013, which is why we chose that year to start. For reasons weâ€™ll explain after the chart, itâ€™s best to think of the numbers presented here as a very good estimation rather than a highly precise measurement. There are still lessons to learn though. 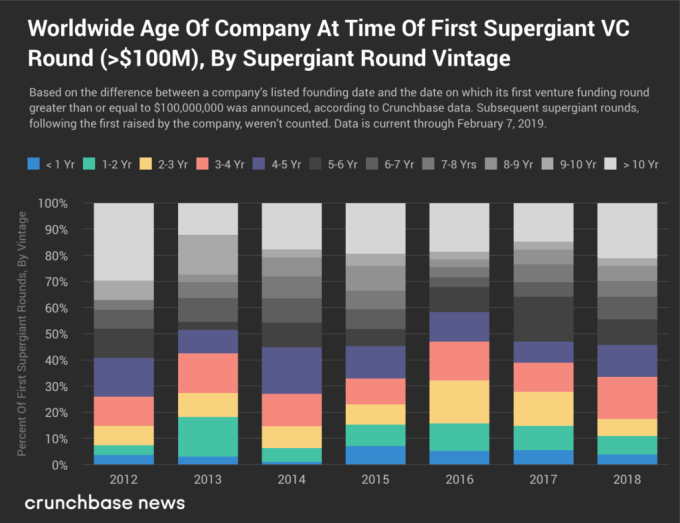 Note from the get-go that company ages were calculated by finding the number of days elapsed between their founded date listed in Crunchbase and the date on which the companyâ€™s first supergiant VC round was announced. It sometimes takes several weeks between when a deal is finalized and when itâ€™s publicly announced (even in the case of these really big deals). We excluded companies with no listed founding date. Also note that the founding dates listed in Crunchbase are often not precise, so that introduces some fuzziness as well.

However, these caveats aside, there are some general trends to be found here. The mix of companies raising their first really big rounds hasnâ€™t changed all that much over time. On average, a little less than half of supergiant rounds are raised by companies roughly five years old or younger. Some years, like 2016, had above-average representation of younger companies raising their first nine-figure deals. Perhaps coincidentally, 2016 was also a yearÂ where supergiant VC (and, indeed, venture activity in general) slowed slightly. 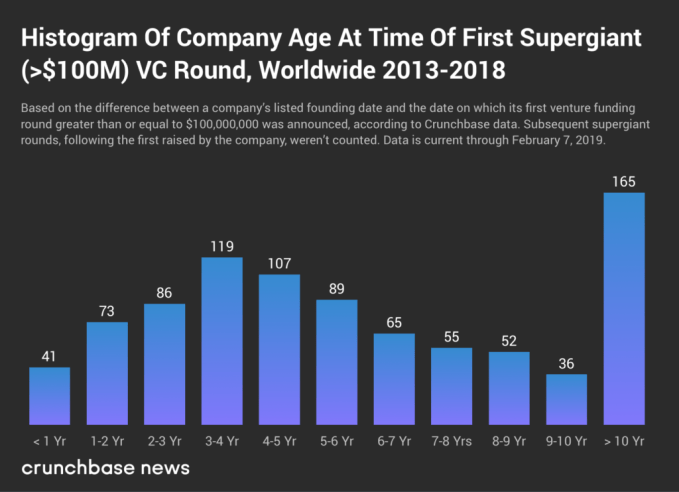 If a company is going to raise their first supergiant VC round (which, recall, are still exceedingly rare), a majority of companies do so within the first five or six years in business. Of nearly 888 first supergiant rounds (raised since 2013) we analyzed, the largest number were struck between years three and five. There is a long tail of companies that raise their first nine-figure deals more than a decade after being founded.

Generally, this isnâ€™t too surprising. Most VC funds operate on a 10-year cycle, as do many startups. Many companies raise their first big rounds of funding within the first few years after launch. Some of these rounds are bigger than others, and thatâ€™s whatâ€™s reflected above.

Itâ€™s not just Mr. Musk who can raise supergiant sums so speedily. Some sectors are more capital-intense than others, requiring some companies to seek large funding deals early, to bring a product or service to market. For example, a number of companies cropped up in the residential real estate space with the goal of streamlining the home-buying process. In practice, it means that the company acquires the home itself, before ultimately signing it over to the homeowner.Â RibbonÂ is one such venture. The fintech company was founded in September 2017 and raisedÂ $225 million in Series A fundingÂ a little over one year later, in late October 2018.

Most companies arenâ€™t a good fit for VC funding. Of those that try to raise VC funding, most fail. Of those that do raise VC money, the surpassing majority of those deals are less than $100 million. To be clear: Weâ€™re talking about very rarified air here. But it helps to confirm another side of a trend we found earlier,Â through some trial and error. Startups arenâ€™t really raising money any faster than they used to. Thereâ€™s just more of them. And the rounds are bigger.