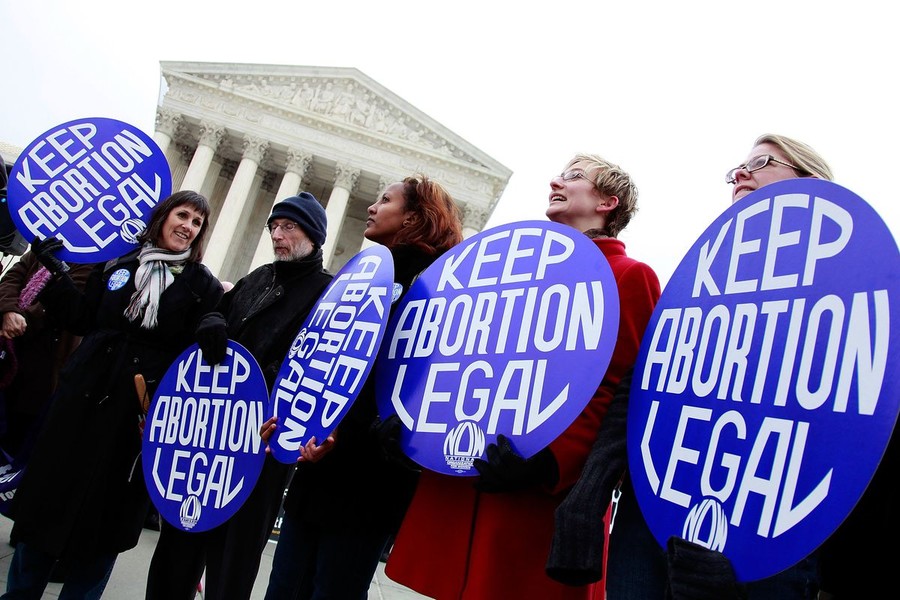 Supporters of the reproductive rights movement rally in front of the US Supreme Court building in 2010. (Photo credit: Mark Wilson/Getty Images)

I didnâ€™t use long-term birth control until I was 30. When I did get an IUD, after a spy-movie-style abortion experience complete with mandatory pre-counseling and two harrowing trips to my state capitalâ€™s clinic, it was because I couldnâ€™t imagine having to walk through those screaming people again. The abortion itselfâ€”taking misoprostol at home in a sunny room with my sweetheart by my sideâ€”was less painful than the composite, ongoing effects of having an intrauterine device (IUD). Looking at the ladies smiling from IUD ads, I knew that I was supposed to experience birth control as better, happier, and healthier than abortion. Yet more than empowered, I felt punished and afraid.

Conversations about contraception and abortion generally make two interrelated assumptions: that contraception is preferable to abortion, and that the two are unambiguously distinct. Efforts to distinguish birth control from abortion were in full swing last month when progressive commentators criticized Brett Kavanaugh for referring to birth control as â€œabortion-inducing drugs.â€� â€œNewsflash, Brett Kavanaugh,â€� tweeted Massachusetts Senator Elizabeth Warren, â€œContraception is NOT abortion. Anyone who says so is peddling extremist ideologyâ€”not scienceâ€”and has no business sitting on the Supreme Court.â€�

Such fervor has defined the U.S. birth-control movement since it began in the early 20th century, and has helped to shape the stigmatization of abortion. As Leslie J. Reagan writes in her 1998 history When Abortion Was a Crime, â€œThe birth control movement struggled to teach people that, first, contraception and abortion were different and, second, that one was morally acceptable and the other not.â€�

Why did the birth controllers have such difficulty getting this point across?  Well, because for most people at the time, the two were effectively the same. Thatâ€™s why historian Janet Brodie has used the term â€œreproductive controlâ€� to refer to both contraception and abortion: 19th-century Americans didnâ€™t make a distinction between, say, eating Queen Anneâ€™s lace seeds to prevent conception and drinking black cohosh tea to coax a late period.

The reasons that birth-control pioneers like Margaret Sanger distanced their movement from abortion were undoubtedly complicated. But Sangerâ€™s racism and classism have been well-documented, and her anti-abortion stance was at least in part connected to the fact that abortion had long been associated with poor people, with unmarried people, with immigrants, and with people of color. In spite of the fact that it was predominantly white, middle-class women who used and had access to abortion throughout the 19th century, Sanger championed birth control, not abortion, as reflective of white, middle-class values and practices.

We still live with the binaries that the birth-control movement worked to create. Whereas abortion is tsk-tsked as messy, dangerous, and irresponsible, birth control is, wellâ€”controlled. If abortion represents disorder, birth control stands for all that is neatly managed and contained. Weâ€™re used to hearing, for instance, that Planned Parenthood actually reduces abortions by providing birth control, and that access to contraception has plunged abortion rates to an all-time low. The claims are true, but they encourage us to see abortion as a kind of chaotic wild animal, with birth control the good cowboy who lassos it in.

On the left, the right, and everywhere in between, we still hear about â€œbadâ€� abortion havers and â€œgoodâ€� birth-control seekers. â€œI never would have thought that about you,â€� my contractor friend said to me when I told him Iâ€™d had an abortion. â€œMost people donâ€™t think about it as carefully as you have,â€� a pro-life neighbor assured me. Even a Planned Parenthood organizer told me, when I asked at a public event why abortion care isnâ€™t available at our local, palatial OB-GYN centers, that women who attend such centers hardly ever need abortions, since we have such easy access to long-term contraception. None of these folks could imagine white, middle-class, well-educated, partnered me as someone who sought out an abortion.

I grew up and still live in rural central Pennsylvania, in valleys and tiny towns that lie culturally somewhere between Middle America and Appalachia. When I think about societal definitions of responsibility and control, I see the â€œBlue Lives Matterâ€� flag  thatâ€™s become as ubiquitous here as those that picture kittens in baskets. The bright-blue line bisecting this flag symbolizes, for those who fly it, a load-bearing wall: Itâ€™s the line that separates order from chaos, law from lawlessnessâ€”and those who have control from those who are controlled.

My unease with Warrenâ€™s â€œcontraception is NOT abortionâ€� comes from how eagerly it appears to side with the â€œcontrolâ€� part of â€œbirth control,â€� and its urge to distance itself from all that is provisional and ambiguous. So what if contraception is abortion, or abortion is contraception? My own reasons for refraining from using long-term contraception for so many years were not poor ones, nor are they unique. I know lots of women like me, who resemble the ones pictured in IUD ads but who have chosen, at different times and for different reasons, to refrain. Some of those reasons are familiar and legible: I could say that we wanted to avoid side effects like depression and painful cramps. But other reasons are more complex and difficult to name.

We still live with the binaries that the birth-control movement worked to create. If abortion represents disorder, birth control stands for all that is neatly managed and contained.

â€œAlthough I didnâ€™t want to get pregnant,â€� reflects the narrator of Sheila Hetiâ€™s most recent novel, Motherhood, after she gets an IUD, â€œI found I liked even less the idea that I could not.â€� Our sexual and reproductive interiors are not always so easy to manage and define. In her famous 1983 commencement address to the majority-female graduates of Mills College, Ursula K. Le Guin asserted that â€œ[W]omen have lived, and have been despised for living, the whole side of life that includes and takes responsibility for helplessness, weakness, and illness, for the irrational and the irreparable, for all that is obscure, passive, uncontrolled, animal, uncleanâ€”[â€¦] Well, so that is our country. [â€¦] I hope you will remember that darkness is your country.â€�

When I got my IUD, I couldnâ€™t shake the feeling that I was being punished for having been irrational and uncontrolled, animal and unclean. That I had failed to act â€œresponsiblyâ€� according to an order that associates responsibility with whiteness, with middle-class behavior, with impregnable bodies, and with masculinity. An order that labels entire groups of people â€œirresponsibleâ€� as a convenient way to justify dismissing their humanity and limiting their freedoms. If we oppose such an order, control cannot be our goal. At the same time that the birth control movement was taking off, in the early 20th century, Rosa Luxemburg articulated a vision of revolution that depended on the unpredictable. â€œWe are the makers of a history which exceeds our control,â€� Jacqueline Rose summarizes Luxemburgâ€™s insight, â€œas well it must be if we are not to descend into autocracy and terror.â€�

Contemporary poet Safaa Fathy echoes them, writing â€œDisoriented we have to be, even if the walls are many.â€� Too many legislators and decision makers like Kavanaugh fear Luxemburgâ€™s shimmering unknown and Fathyâ€™s vital disorientation. But I know that darkness is my country.