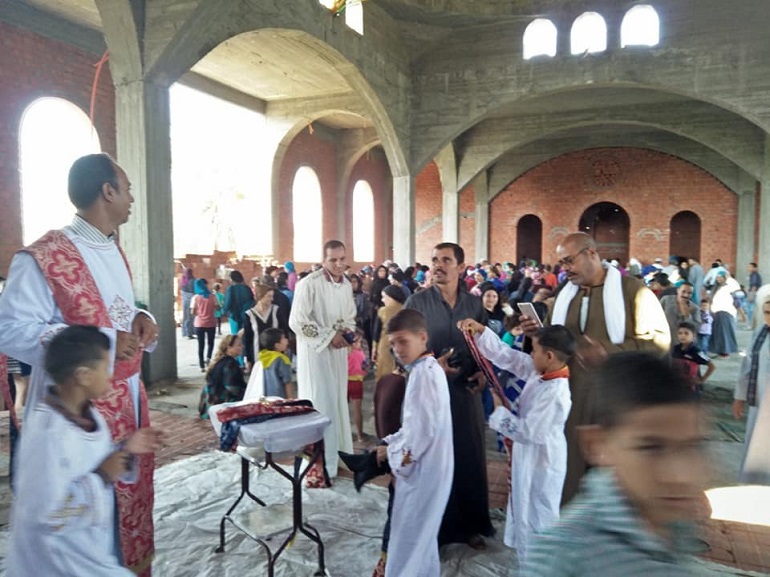 After seven years of closure of their old church by local authorities due to â€˜security reasonsâ€™, the Coptic community in the Egyptian village of Kom el â€“ Loufy celebrated the completion of the first phase of building their new church, the Church of Virgin Mary and Martyr Aban, by holding their first ever Mass on Sunday.

Previously, the priest of the Saint Abu Sefein Coptic Orthodox Church near the village of Ezzbet Rafla welcomed the Copts in his church.

Following the closure of the old church, the Copts experienced serious discrimination as two young angry Muslims set fire to four Coptic homes in the village after rumors had spread that one of the houses would be turned into a church.

However, by the end of 2017, the Copts decided to drop their charges against the arson in order to get permission to build a new church beginning from January.

In August 2016, the Egyptian Parliament passed a new law on the construction of churches in an effort to ease the process of obtaining a license to build a church.

Despite the efforts, there were still more than 3,500 pending applications in the face of only 219 churches that were legalized this year.

Yet, earlier this month, the Christian community in another Minya village faced a mob of extremists attacking their church after it received approval. The scenario was made worse as the police failed to intervene, with one officer promising the attacker that there would be no more churches in the village. Villages in Egypt are known to be filled with religious strife and conflicts more than in cities such as Cairo or Alexandria.

Many other Copts have had similar grieving experiences, as the building of new churches continues to be an unresolved issue.