Biotech venture funding has been on a tear for the past couple of years, and corporate investors in the space are doing their part to boost the totals.

Here at Crunchbase, weâ€™ve put together anÂ indexÂ of the largest pharma and biotech companies active in startup investment, along with their in-house venture arms. For the second year in a row, weâ€™re tallying their venture investments by round count and dollar totals.

The broad finding? Corporate biotech investors sharply increased the sums put into startup rounds they led in 2018. Overall, they also participated in rounds that were valued at nearly twice year-ago levels.

These arenâ€™t small sums either. In all of 2018, corporate venture investors participated in rounds valued at $8 billion. Rounds with a corporate bio VC as lead investor, meanwhile, totaled around $1.7 billion.

Below, we drill down into a bit more detail, looking at funding totals for the past five years, largest rounds and most active investors.

First, itâ€™s worth noting that overall global biotech venture funding rose sharply last year and has been running at historically high levels for the past few years.

For 2018, biotech startups globally raised just shy of $29 billion in seed through late rounds from all investors, according to Crunchbase data. Thatâ€™s up from $19 billion in 2017.1 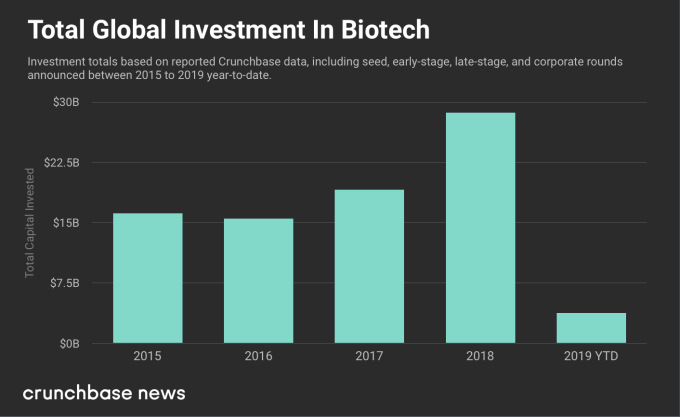 Most biotech deals do not include a corporate backer, but a pretty substantial minority do. In 2018, investors in our corporate biotech index participated in 138 seed, venture or growth-stage funding rounds, up from 122 in 2017. 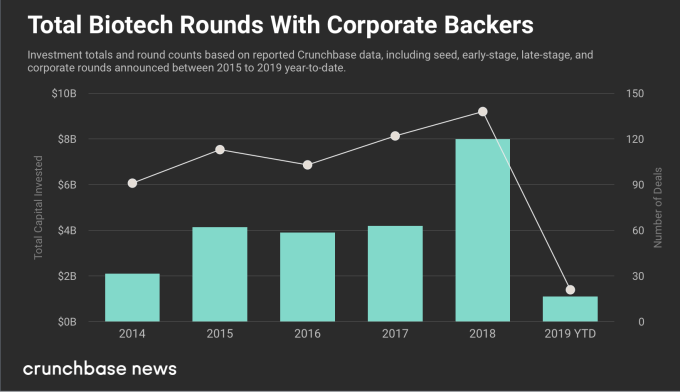 Round counts did not rise as much as investment totals, as the average biotech deal has been getting bigger. The sector has not been immune from the rise ofÂ supergiant funding rounds, and deals valued in the hundreds of millions have become far more common.

Thatâ€™s reflected in the funding totals. Altogether, 2018 rounds with a corporate backer were valued at $8 billion, including contributions from all investors. Thatâ€™s up from $4.2 billion in 2017.

We also look specifically at bio funding rounds in which a corporate backer was the lead investor. In these cases, itâ€™s safe to assume that the corporate investor put up a large portion, or possibly even all, of the reported funding.

For 2018, we saw corporate bio investors leading a larger number of deals, with a much larger aggregate value than prior years.

There were a few supergiant rounds in the mix. The largest was a $300 million late-stage round for personal genetic testing providerÂ 23andMe, led by GlaxoSmithKline.

Two others were led by Celgene. One was a $250 million early-stage round last February for Celularity, a startup it spun out to focus on cancer treatments using placental cells. The other was a $101 million round last March forÂ Vividion, developer of a proteomic drug discovery platform.

In all, corporate bio investors led at least 30 funding rounds in 2018, with an aggregate value of $1.7 billion. Thatâ€™s approximately triple 2017 levels.

Of course, not all corporate bio players are equally exposed to startups. Some are far more active than others.

Celgene, which agreed to be acquired by Bristol-Myers Squibb earlier this year (the deal hasnâ€™t closed yet), is another really active venture player. The New Jersey company has participated in 30 deals valued at nearly $1.8 billion over the past three years, including 13 since the beginning of 2018.

The rise in corporate VC investment in pharma and biotech appears to reflect the continuation of a long-term trend toward supplementing and even supplanting in-house R&D with venture investment. Recent quarters, however, demonstrate that itâ€™s becoming an increasingly expensive strategy, as round sizes grow and investors devote more dollars to funding hot startups.