This story was originally published on February 18, 2016.

Over the past 20 years, the internet has changed the age-old profession of sex work in major ways. Sex workers labor in an intensely hostile cultural climate. Due to the illegal nature of their jobs, they are vulnerable to rape, murder, theft, and police violence. In recent years, sex workers have used the internet to make their jobs safer: They use websites to screen clients and have private forums to provide support and knowledge to each other. Like any other entrepreneur or small business owner, those providing sexual services use industry-specific websites to advertise and promote their services.

In the interest of ending human trafficking, anti-trafficking charities, and federal law enforcement have steadily boosted security measures on sex workersâ€™ websites, with expansive investigations often culminating in the closure of such sites and strings of prostitution-related arrests. Human trafficking and sexual slavery are, of course, absolutely heinous crimes. Ending trafficking and raising awareness about the violence that creates trafficking is crucial. However, the sweeping raids of sex work websites have threatened the well-being of many who consensually sell sexual services.

This January as part of National Slavery and Human Trafficking Awareness month, the mayor of Boston and the attorney general of Massachusetts co-hosted an event called #hacktrafficking4socialgood. The well-intentioned event asked MIT students to develop surveillance tools which, in the future, could assist law enforcement to monitor sex-industry websites in order to â€œdisruptâ€� and â€œidentifyâ€� the online market for commercial sex. These digital tools are meant prevent trafficking, but online security measures like these would put consensual sex workers in a bad position. The climate of fear created by online stings pushes the sex market even further underground, where isolation and invisibility make workers easy targets for violence. Heavy-handed online surveillance measures also push bonafide trafficking victims further from our view, making it more difficult for them to be identified and assisted.

In Seattle last month, law enforcement used digital tools in an anti-trafficking sting. The county sheriff and local police teamed up with the FBI to shut down a Seattle-based sex industry website called The Review Board. Listening to Seattleâ€™s Sheriff John Urquhart, itâ€™s easy to be convinced that this led to only positive results. â€œThese women are victims,â€� Urquhart said. â€œWe wanted to rescue them out of the horrible life that they found themselves in.â€� Subsequently, law enforcement issued 126 search warrants, arrested 14 people, busted 12 brothels, and identified 12 victims of sex trafficking, at least some of whom are South Korean women the officers say were brought into the United States on tourist visas and forced to sell sex to pay off family debt. Freeing women from sexual slavery is definitely a noble task. But whether the women caught up in this bust were actually victims is an uncertain truth.

According to court documents, the South Korean women traveled to Seattle â€œof their own volition.â€� Itâ€™s fathomable that an undocumented immigrant would opt for the immunity and visa status granted by the label â€œvictim,â€� rather than the seizure of assets, imprisonment, and deportation that can come with the label â€œprostitute.â€� The founder of Seattleâ€™s Sex Worker Outreach Project, Savannah Sly, told a reporter from The Stranger that many of those affected by the raid were actually women earning a living in the sex industry by choice. She expressed concern about the website bust, saying that many consensual sex workers relied on The Review Board to safely advertise for clients. Having the FBI shut down the site was â€œextremely frightening,â€� said Sly. â€œItâ€™s like punching into work and seeing FBI tape all around your building. I think thereâ€™s going to be a lot of sex workers around Seattle who have a hard time making rent this month, who are extremely concerned about their safety and worried if theyâ€™re going to get a knock on their doors from police officers.â€�

While any instance of forced prostitution merits a response, there are alternative means to advocate for the rights of trafficked sex slaves. Consensually working adult service providersâ€”who share massage parlors, strip clubs, and in-call locations with potential victimsâ€”are in the best position to survey their environments for plausible criminal activity. Seeking their input could more effectively and directly confront the real issue of victims being coerced into the sex trade. For example, last year, utilizing input from sex workers Oregon set up a statewide hotline for strip club employees to report workplace problems and potential abuse.

As a result of online raids and website closures, workers lose the ability to mediate transactions through the internet and are forced to negotiate on the street, where they are more likely to suffer harassment and violence. In 2010, Craigslist was forced to close its adult services section under pressure from attorneys general and anti-trafficking organizations who claimed it promoted child sex slavery. Unsurprisingly, the closure of Craigslistâ€™s adult services section failed to halt the worldâ€™s oldest business. Instead, the business moved to sites like myredbook.com and Backpage. Accused of money laundering and racketeering prostitution, myredbook.com was shut down by the FBI in 2014. That website, local to the Bay Area, featured a forum where workers could discuss blacklisted clients and safety strategies and was, at the time, the only free online advertising venue for female workers. Backpage, on the other hand, in an anomalous but remarkable lawsuit, was able to push off law enforcement by noting that third-party publishers cannot be held accountable for reviewing every post for legality. Backpage frequently works with law enforcement by flagging suspected cases of actual traffickingâ€”an example of the ways in which cooperating with the industry, rather than penalizing it, may be an effective means to terminating sex slavery for good.

When these websites are targeted, workers spooked by lurking law enforcement may turn to the street, where the immediacy of such interactions makes it extremely difficult, if not impossible, to screen clients. Scott Cunningham, a Baylor University professor who studies prostitution and web-based black markets, told Wired that in wake of myredbook.comâ€™s closure, the Internet may have actually decreased the number of street-based workers between the ages of 25 and 40. 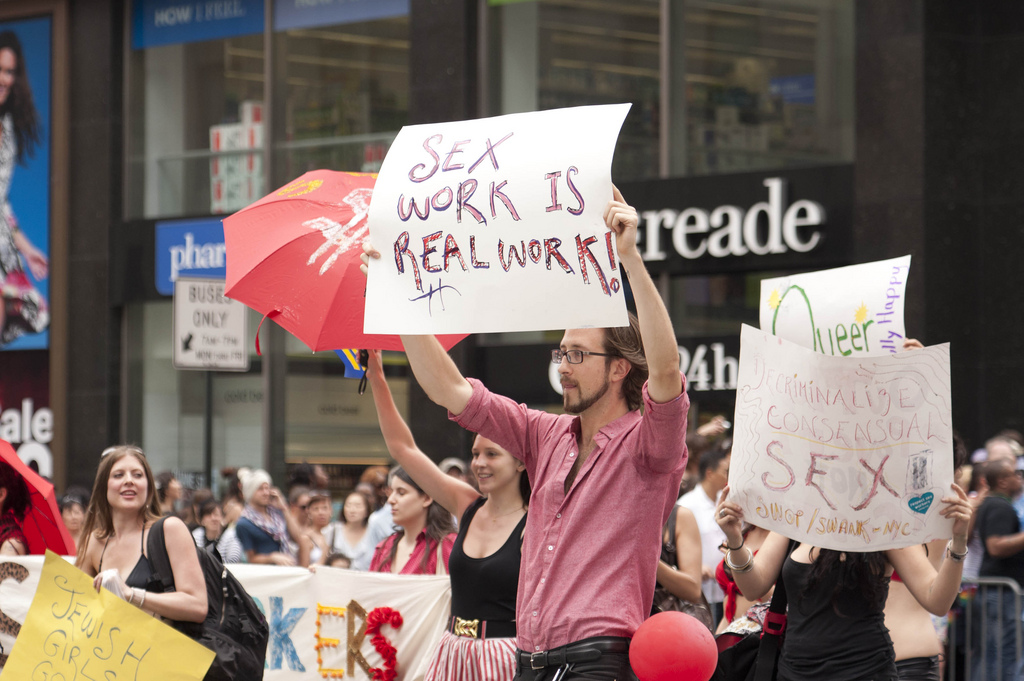 In order to avoid attracting the attention of law enforcement, workers on the street sometimes hop impulsively into a johnâ€™s car, where they are stuck with a stranger and at the whim of child-safety locks. It can also be harder for street workers to negotiate condom usage. In some places, a street workerâ€™s possession of a condom may even be used against them as evidence to prosecute them for prostitution. In this climate of fear, workers may be more likely to seek the support of a potentially abusive third party to assist in arranging their work. Thus, the possibility for trafficking, rape, and murder of sex workers can actually rise with the heavy-handed monitoring and closure of these websites. It is an understatement to say that the use of hypervigilant security practices on industry websites does more harm than good.

Itâ€™s important to note that human trafficking isnâ€™t created by Craigslist, myredbook.com, The Review Board, or any one of a litany of industry websites. The issue is rooted in our globalized economy, which demands increasingly flexible, low-cost, and unprotected laborers. According to the International Labor Organization, only 11 percent of trafficking victims are part of the sex trade. Internationally, forced labor is a huge problem in more mundane industries like fishing, mining, and farming. Online stings are costly and reactionary responses to the systemic problems associated with the global economyâ€™s demand for cheap labor. Putting an end to human trafficking requires a response that takes into account those systemic problemsâ€”not just busting website after website. Creating legal passages to citizenship for working class migrants would, for example, open up a legal and safe means for workers to enter the country without seeking the help of a trafficker, which, due to our heavily restrictive immigration system, is often the only option.

At the same time, if we were to remove the penalties associated with consensual sex work, sex workers would be able to report exploitation, violence, unsafe working conditions, and instances of trafficking to law enforcement. â€œIf the sale of sex for money were decriminalized in the U.S., we would then be able to police our industry and help those who are in bad positions. We could report serial rapists and traffickers, making our communities safer for all,â€� Kristin Di Angelo, head of Sacramentoâ€™s Sex Worker Outreach Project, told ThinkProgress.

If well-intentioned people want to hack the world to make it safer for trafficking victims, finding ways to support sex worker rights, decriminalization of consensual sex work, and comprehensive immigration reform are good places to start. Designing tools for law enforcement to crack down on the websites sex workers use to make their jobs safer will only push vulnerable people further underground.

For more on the economic realities of sex work, check out our Popaganda episode â€œSex Work is Work.â€� 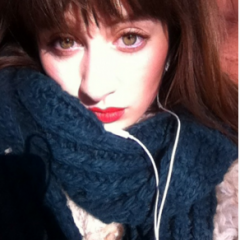 Holiday Black is a freelance writer and poet living in Brooklyn, NY. Her work focuses on intersectional feminism, pop-culture, queer issues, and sex workers rights. She is the assistant artistic director of Gemstone Readings, an online gallery space and femme-centric reading series in NYC. You can find more at her website, www.holidayblack.com, or follower her on twitter @holidayblack.