Almost 10 percent of people on the interwebs used at least one of the 25 worst passwords on SplashData’s annual list, which was released this week. And nearly three percent of you are still using “123456,” the worst password of the entire ranking.

The eighth annual list of worst passwords of the year is based on SplashData’s evaluation of more thanÂ 5 million passwords leaked on the internet. Most of the leaked passwords evaluated for the 2018 list were held by users in North America and Western Europe. Passwords leaked from hacks of adult websites were not included in the report, according to SplashData, which provides password management applications TeamsID, Gpass and SplashID.

This year revealed the same takeaway as previous ones: computer users continue to use the same predictable, easily guessable passwords. For instance, 2018 was the fifth consecutive year that â€œ123456â€� and â€œpasswordâ€� retained their top two spots on the list. The following five top passwords on the list are simply numerical strings, the company said.

There were a few newcomers on the list.Â President Donald Trump debuted on this yearâ€™s list with “donald” showing up as the 23rd most frequently used password.

â€œHackers have great success using celebrity names, terms from pop culture and sports, and simple keyboard patterns to break into accounts online because they know so many people are using those easy-to- remember combinations,” according to Morgan Slain, CEO of SplashData.

SplashData does offer some tips to protect your data, including the use ofÂ passphrases of 12 characters or more with mixed types of characters, using different passwords for each login, and protecting assets andÂ personal identity by using a password manager to organize passwords, generate secure random passwords and automatically log into websites. 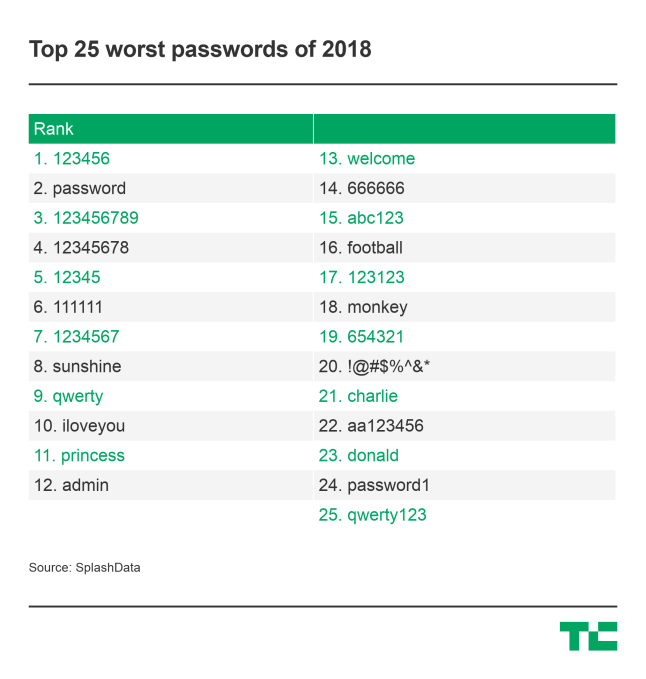