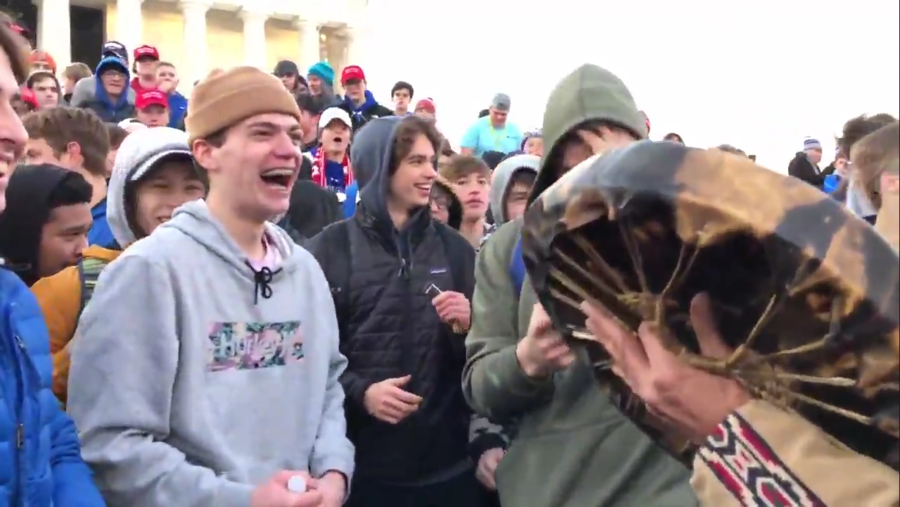 Students at the Lincoln Memorial after the March for Life (Photo credit: Twitter/Waleed Shahid)

Since Covington Catholic High School students went viral for their confrontation with an Indigenous veteran, there have been many shaky defenses of the teens, from â€œDid they really do anything wrong if it wasnâ€™t illegal?â€� to â€œThese good boys donâ€™t deserve to have their lives ruined.â€� â€œWe’ve reached out and voiced our supportâ€� for the students, White House Press Secretary Sarah Sanders told reporters this week.

But letâ€™s take a shiteating smirk and MAGA hat back and remind ourselves that these students were in D.C. on a school field trip to attend the March for Life and challenge the constitutional right to abortion care.

Since 1973, the anti-choice March for Life has been held annually on the anniversary of Roe v. Wade. Vice President Mike Pence and his wife Karen Pence attended this yearâ€™s March, and President Trump addressed the crowd via video, saying, â€œAs president, I will always defend the first right in our Declaration of Independence, the right to life.â€� Many Catholic schools nationwide bus their students to the March, which is how those teen boys, whoâ€™ve been taught at their conservative all-boys school that abortion is a sin, ended up in D.C. â€œItâ€™s not designed to be a vacation,â€� a Covington Catholic parent who chaperoned the 2017 trip to the March told USA Today. â€œItâ€™s designed to be a mission. Itâ€™s something special.â€�

The confrontation between dozens of Covington Catholic students, a small group of Black Israelite protestors, and the Omaha elder Nathan Phillips began while the teens were waiting for their buses to pick them up from a day filled with misogynist anti-choice events. Videos of the encounter show students laughing, mocking, and yelling at protestors. They also assert their dominance over the space and the protesters by chanting school cheers as if they were intimidating the other team at a homecoming game.

Phillips saw the teens and protestors as â€œbeast and prey.â€� â€œThese young men were beastly and these old black individuals was their prey, and I stood in between them and so they needed their pounds of flesh and they were looking at me for that,â€� Phillips told the Detroit Free-Press of the encounter.

Nick Sandmann, the student at the epicenter of the confrontation, appeared on the Today Show this week to explain â€œhis side.â€� Ahead of his appearance, Sandmannâ€™s family hired RunSwitch PR, a firm with deep ties to the Republican Party; one of the agencyâ€™s partners served on Mitt Romney and Jeb Bushâ€™s presidential campaigns, and worked for Mitch McConnell and George W. Bush. Sandmann refused to apologize to Phillips, saying â€œI canâ€™t say that Iâ€™m sorry for listening to him and standing there.â€� Presumably under the counsel of his GOP friends, he reframed the confrontation as a First-Amendment issue by adding, â€œI would say Mr. Phillips had his right to come up to me. I had my right to stay there.â€�

VIDEO: https://t.co/pFgrJA1N0Q From :06 to 1:06 you can see a teacher or coach of #CovingtonCatholic leading the teens in a chant– several of the Covington students are in blackface. At this game, black players on the opposing team were verbally abused. pic.twitter.com/gqyNRUjYXD

Since the March, other Covington Catholic students have been doing some PR duty of their own on talk shows, and two current students were asked to explain a video of another expression of â€œschool spiritâ€� that surfaced Monday. Fox & Friends co-host Steve Doocy asked, â€œFive years ago, there was a pep rally where one of the members of the school body appeared to have blackface on. People have even asked you to explain that. How do you explain that?â€�

â€œI just explain it as showing school spirit,â€� the senior boy answered. â€œWe have many themes. Like nerd, business, whiteout, blueout, blackoutâ€”as youâ€™ve seen in the video. Ever since Iâ€™ve gone to CovCath, we havenâ€™t been able to wear black paint because of the video, but I know the kids meant nothing by it, itâ€™s just showing school spirit.â€�

The Covington Catholic students were on a â€œmissionâ€� to protest reproductive freedom that ended in the public taunting of people of color. Theyâ€™re not sorry; they were just showing school spirit.

Read this Next: Gather Your People

by Kim Kelly
We cannot dismantle what we refuse to confront.