The Tencent-backed company went public back in October when it raised around $1 billion through an NYSE listing. Its latest earningsÂ released today show revenue broke $200 million for the first time ($219.6 million) but losses continue to pile up. Revenue was up 71 percent year-on-year to hit the record figure but Sea’s losses continue to stack up. The company lost $250.8 million in Q2, up significantly from a $92.1 million loss one year previous and $216.2 million negative in the previous quarter. 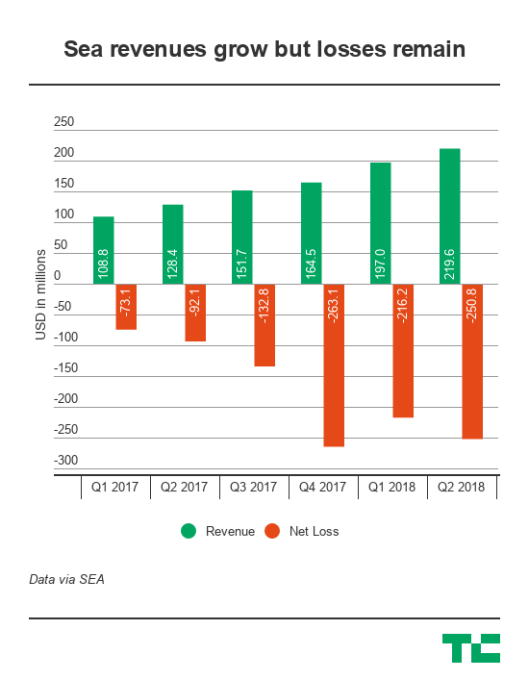 Sea’s main business, its Garena gaming unit, grew 19 percent to reach $116.9 million in revenue, butÂ the firm is placing a lot of emphasis on its Shopee e-commerce service — which is the benefactor of a recent $500 million capital raise — and its growth continues to be promising.

Shopee GMV, the total value of all goods sold on the service, grew 171 percent to $2.2 billion. That doesn’t include take-home revenue, but for the first time that figure has been broken: Shopee grossedÂ $58.8 million in sales. That figure is up over 2,000 percent annually, but Sea has only just begun to monetize the service which is reflected in the huge rise.

For now, a lot of that revenue looks to be based on aggressive user acquisition as Shopee battles with rivals that include Lazada, the e-commerce service owned by Alibaba that has a large budget to work with.

Sea’s cost of marketing across all services — Shopee, Garena and its AirPay service — jumped 131 percent year-on-year to reach $175.2 million in Q2. But, it pointed out that sales and marketing as a percentage of GMV shrunk to 6.2 percent from 6.8 percent and 6.6 percent in the previous two quarters.

“Shopee continued to expand rapidly across all markets, strengthening its leadership in the region. Our monetization strategy for Shopee is delivering ahead of expectations, even at this early stage,” said Sea CEO Forrest Li in a statement.