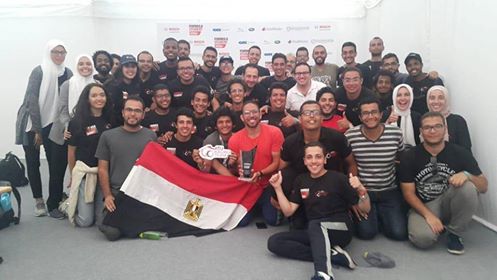 This is not the first time the ASU Racing team broke records at the Formula Student competition.

The Egyptian university team, the ASU Racing team, became the first Egyptian team to win the Cost and Manufacturing award on July 15th, 2018 at the Formula Student engineering competition in the UK, while also movig ahead of some of the best engineering Â universities in the world.

The win marks the second time in the history of the Formula Student competition that an Egyptian team proudly came home with a trophy in hand. The first trophy being in 2016 when ASU Racing team was presented the best business presentation award.

While everyone was busy watching the world cup and rooting for their favorite team, this group of young engineers were working day and night in the Automotive Lab in Ain Shams University. They were working for a whole year on designing, manufacturing and testing a race car so they can compete with it in the Formula Student competition taking place on 11th of July on the Silverstone circuit in the UK. 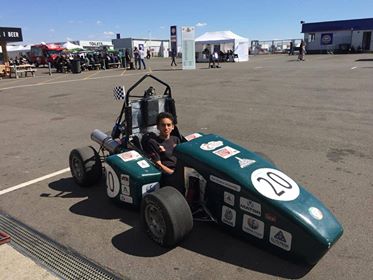 The ASU Racing Team car, numbered 20, was the first car to roll onto the track.

On the 15th of the July, the ASU Racing Team was able to reap what they sowed; breaking yet another record in their long list of achievements. Â In addition to their Class 1 Cost and Manufacturing trophy, the Class 2 team recieved the second place trophy in business presentation, and the third place trophy in the design presentation while the Class 1 team received the sixth place in the business presentation, and got the 31st place overall among 81 participating teams worldwide.

They were the first Egyptian team to get the full safety stickers on their first trial, and roll onto the track events which are about testing the car dynamically through corners and lap time. Not just that, but their car had successfully endured the 22 km challenging track as one of few teams that managed to endure the track and for the first time in MENA region history.

The Formula Student competition is a global event that welcomes the top universities from Europe, Asia and Africa to compete with each other while showcasing their engineering skills, management abilities, and marketing talents. It is considered Europeâ€™s most established educational engineering competition. Supported by high-profile engineers, the competition fosters some of the greatest young minds in the engineering realm. The competition has two categories: Class 1, where the teams compete with their cars in both the static events and the dynamic events, and Class 2, where the teams compete with their initial design in the static events.

This is not the first time that ASU Racing Team broke records on the Silverstone circuit. The efforts of the founders and the experience of its alumni are considered the pillars on which it stands today.

Since their first participation in 2012, their ranks have been steadily improving despite the lack of resources in Egypt. In 2015, their performance in the Class 2 business presentations impressed the judges; earning them second place, and fourth place overall.

The interdisciplinary team blessed the Formula Student stage in 2016 when they got their first trophy in the Class 2 business presentation, making them the first Arab and African team to win a trophy in a Formula Student event.

In 2017, the team ranked 28th in Class 1 among more than a 100 team that competed in the dynamic events as well as the second place in the Class 1 business event.

ASU Racing Team was founded in 2011 with a vision of transforming the automotive industry in Egypt. It is operates under the umbrella of iHub, a multi-university Innovation center. iHub is the main pillar that pushes extracurricular professional and entrepreneurial development in ASU’s FUSION Initiative to help the industry find the strong talents they seek. They are backed by a multitude of academic institutions and industry key players such as ITIDA, the Academy for Scientific Research and Technology, The Arab Organization for Industrialization, Â ChemaFoam and Emar. However, what had initially helped the team stand on its feet and take its first steps were the support of the university administration, faculty members, professors and teaching assistants.

Dr. Mohamed Ayman Ashour, Dean of Engineering told Egyptian Streets that the Egyptian nation would not progress without inspiring the youth to plan, innovate, implement and excel, and credited their partners for their support. He added that he looked forward to continuing their efforts on a larger scale with those willing to join iHub in their journey

The health coach is ready to see you Inconvenient Women