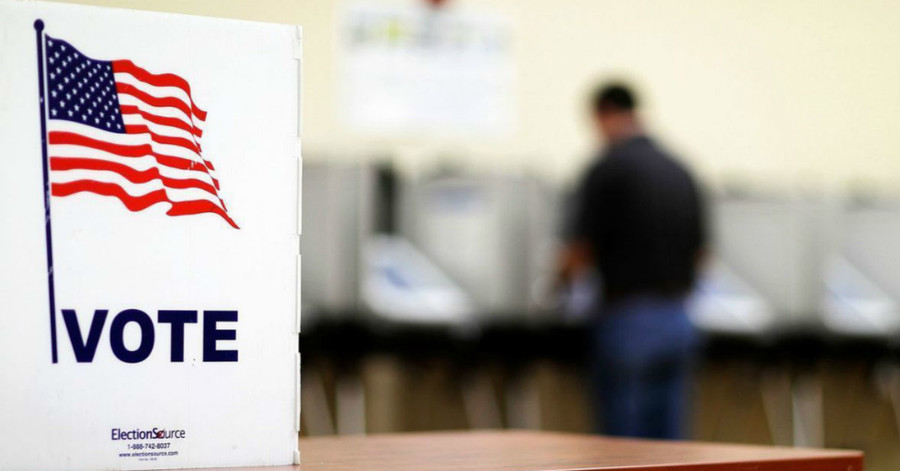 A voter casts his ballot in a special election June 20 outside Atlanta. (David Goldman/Associated Press)

Record voter turnout in the midterms netted a number of victories for candidates focused on civil rights, single-payer healthcare, and other progressive causes. But the midterms were also marred by de facto and de jure voter suppression, including a last-minute court ruling that required Native voters in North Dakota to present IDs with residential addresses; voting machines in Georgia missing power cords; and hours-long lines in several New York City precincts. A coalition of civil-rights groups, including the NAACP, Lawyerâ€™s Committee for Civil Rights Under Law, and Asian Americans Advancing Justice, received over 29,000 calls about â€œvoting irregularities,â€� while outrageous stories about long voting lines dominated social media.

Voting-rights advocates have been fighting voter suppression for decades, but their efforts are mostly ignored until thereâ€™s a midterm or presidential election. And by the time the polls open, itâ€™s already too late to ensure every voter has access. That came into sharp focus in Georgia, where the purging of voter rolls and broken voter machines have plagued a close race between gubernatorial candidates Brian Kemp and Stacey Abrams. Kemp was supposed to oversee a fair election as the secretary of state, but since 2008, a voter-ID law has disqualified 1,586 ballots. Abrams, meanwhile, mobilized voters of color and fought to restore voting rights for 53,000 Georgia voters whose registrations were frozen.

Since the Supreme Court decimated key parts of the Voting Rights Act of 1965 in 2013, conservative legislatures have continued targeting low-income communities of color, elders, disabled people, students, and other key Democratic constituencies. Progressives needed a blue tsunami, not a blue wave, to overcome conservative-favoring congressional districts: Before the midterms, politicos estimated that Democrats would need to win by a margin of 11 points to gain control of the House, and though Democrats earned more overall votes, Republicans still gained three seats in the Senate. California has two senators to represent nearly 40 million residents while Montana also has two senators for one million residents.

Thanks to the allocation of political power, states with smaller populations can also have an outsized impact in presidential elections; Wyoming has the highest voter power in the nation, with 142,000 residents per elector, while New York has a 519,000-to-one ratio. Laying the groundwork to silence voters has taken considerable effort thatâ€™s mostly been achieved through policies. A growing number of states, including North Carolina, are instituting legal barriers to voting that amplify inequalities. While there were a number of opportunities to intervene, civil-rights groups didnâ€™t have the institutional or financial clout to fix the problem. The Democratic Party itself has been slow to act on voter-suppression issues, and has at times made it harder to participate in elections, including by supporting the outdated caucus system.

Thereâ€™s also been a failure to support Black candidates who explicitly acknowledge voter suppression in their campaigns. But now, the stakes are even higher as the Department of Justice, which is responsible for enforcing civil-rights laws, is in turmoil. Former Attorney General Jeff Sessions supported racist voting policies, including promoting falsehoods about election fraud, undermining the Voting Rights Act, and harassing Black organizers. His successor, Matthew Whitaker, wonâ€™t prioritize voting rights, even as the 2020 Census and subsequent redistricting rapidly approaches. Voters in Colorado, Michigan, Missouri, and Utah all approved measures designed to reform redistricting on Tuesday nightâ€”just in the nick of time.

There are other opportunities to reform and streamline the process of administering elections, including addressing polling place accessibility; opening more polling places to serve a greater number of voters; eliminating caucuses; expanding voting hours and days; allowing all voters to request absentee ballots; and investing in proper training for poll workers. States like Michigan, which just enabled same-day voter registration, and Florida, which just restored voting rights to 1.4 million people with felony histories, are showing the way forward. Thereâ€™s also room to push social-media giants like Twitter and Facebook to address how their platforms are used to spread election disinformation.

Without a clear mandate, however, it will always be difficult to challenge voter suppression. White progressives must coalition-build with organizers whoâ€™ve been fighting voter suppression and continue applying pressure to the media to cover the issue, in addition to getting involved with local elections administration as poll workers, get out the vote organizers, and participants in party policymaking that determines how primaries are held. That work must include acknowledging the barriers to election participation: Instead of asking why someone isnâ€™t voting, we should ask, â€œWhatâ€™s making it difficult for you to vote?â€�