Demand for sustainable coffee is growing, a boon for socially conscious coffee lovers — but many small growers are missing out because they lack the ability to verify that their coffee beans are grown using sustainable labor and eco-friendly practices. In fact, verification is often accessible only to large coffee estates or cooperatives. Enveritas wants to change that. The nonprofit, which recently completed Y Combinatorâ€™s accelerator program, uses geospatial analysis to make the process more efficient, enabling it to offer free verification to smallholder farms.

Enveritasâ€™ goal is to end poverty in the coffee sector by 2030. Before founding Enveritas in 2016, CEO David Browning and head of operations Carl Cervone worked at TechnoServe, a nonprofit that serves businesses in developing economies. Browning led TechnoServeâ€™s global coffee practice, while Cervone advised coffee growers in Africa, Asia and Latin America about sustainability trends.

Browning tells TechCrunch that TechnoServeâ€™s coffee team spent a lot of time working with smallharder farmers, many of whom donâ€™t have access to sustainability verification because their farms are too remote or small. The typical coffee grower served by Enveritas has less than two hectares of land, lives on less than $2 a day and relies on cash crops for their familyâ€™s income.

Part of the reason is because many verification solutions rely on field workers who visit farms and track sustainability standards using pen and paper, a time-consuming and costly process. 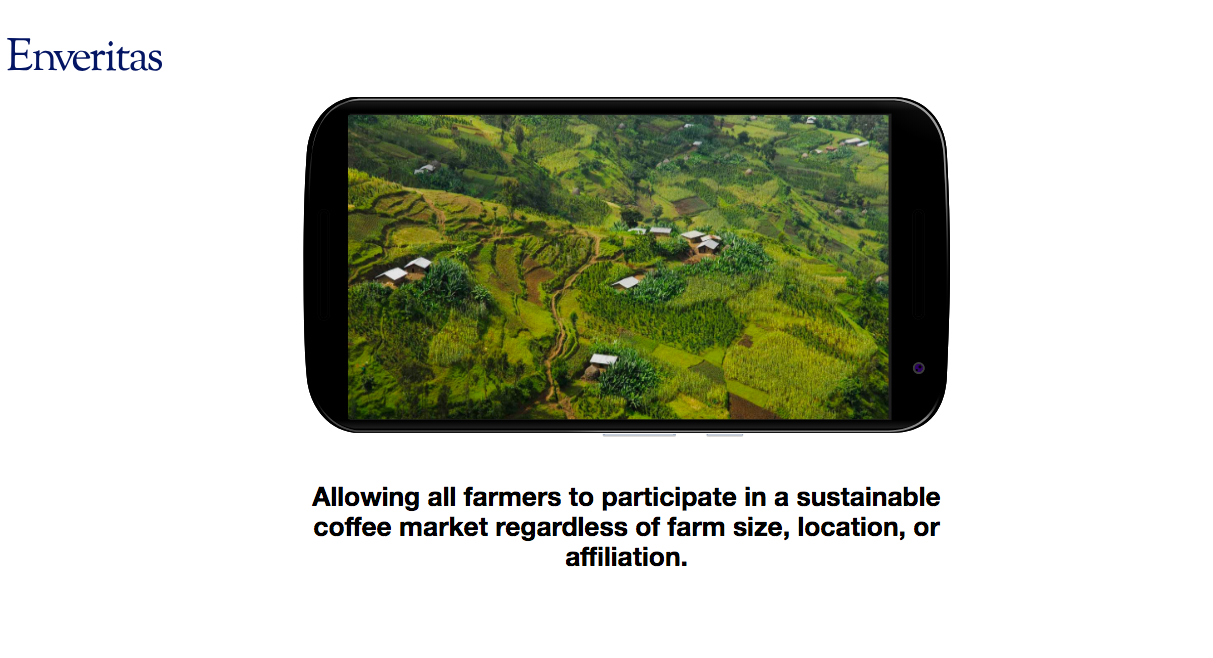 To develop a more efficient and scalable system, Enveritas uses geospatial and machine learning to identify coffee farms through satellite imagery and monitor for issues like deforestation. Though it still relies on local partners to visit farms and confirm that sustainability standards are being followed, its technology enablesÂ Enveritas to provide verification services for free.

Enveritas checks for 30 standards, which it divides into three categories: social, environmental and economic. “Social” includes no child labor and workersâ€™ rights; “environmental” checks for problems like deforestation, pollution or banned pesticides; and “economic” covers minimum wages, ethical business practices and transparent pricing, among other standards.

The organization currently operates in 10 countries, including Uganda, Indonesia, Ethiopia, Nicaragua and Costa Rica, with plans to expand into more markets.

Sustainable coffee isnâ€™t just in demand by caffeine lovers with a penchant for social justice. Many of the worldâ€™s biggest coffee companies, including Illy and Starbucks, have launched sustainability initiatives as part of their corporate responsibility measures. Offering coffee grown using sustainable labor or environmentally friendly practices also helps differentiate their products in a crowded marketplace. Research by the National Coffee Association, an American trade group, recently found that many millennials prefer sustainable coffee, with up to two-thirds of 19 to 24-year-olds surveyed said they pick their coffee based on whether it was grown using sustainable labor and environmentally friendly farming practices.

While coffee is currently its main focus, Browning says Enveritasâ€™ system can be applied to other agricultural products that need more visibility in their supply chains. For example, it also can be used to verify the sustainability of cocoa, cotton and palm oil.

As a nonprofit, Enveritas faces different funding challenges from other tech startups. Browning says it is currently at the equivalent of being ready for a Series A. Much of its backing comes from coffee companies (Enveritas canâ€™t disclose which ones) that hope to benefit from Enveritasâ€™ solutions.

â€œOne of the advantages of this system is that it reduces the cost for coffee companies relative to the traditional pen and paper system, but itâ€™s also simultaneously free for farmers,â€� Browning says. â€œThatâ€™s one of the most compelling innovations, so itâ€™s a win-win for both.â€�