For being in charge of what is probably the biggest game in the world right now and all the responsibilities that come with that, Epic is proving itself quite capable of changing things up on the fly.

Case in point: Last week, a video went viral showing one player making a valiant effort to save another player â€” a competitor, no less! â€” who had found themselves in a more or less inescapable section of the map… only to have things go wonderfully, hilariously wrong at the last second. Today, a tombstone marking the mishap appeared in-game.

Here’s the video of the original rescue mission, as streamed by would-be hero Muselk (wait for the end):

Watch as @MrMuselk attempts to rescue a fellow player.

The whole thing is like an unintentional lesson in comedic timing.

Today, this tombstone showed up in the same location for anyone who dare wander down there themselves: 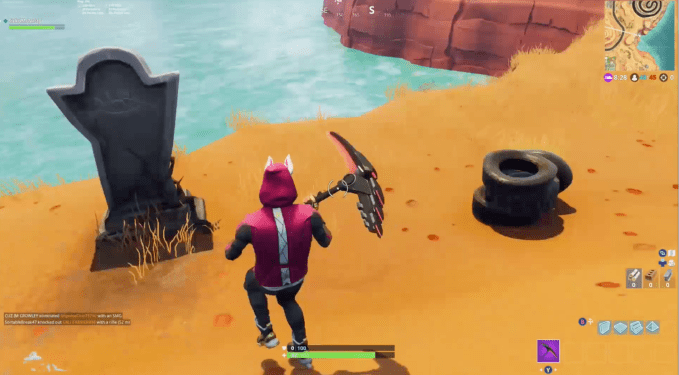 For those unfamiliar with the game’s mechanics: Fortnite lets you build structures to defend your position or reach new heights… assuming you’ve scrounged up enough materials (wood, brick or metal.) Muselk had enough materials to reach the stranded player… only to hit the build limit (the outer-most regions of the map where building is disabled) with the rescue target just out of reach. That’s where things go extra wrong.

It’s just a cute little nod, sure â€” but it shows just how damned agile Epic has gotten at making changes to this game. They add a new gun and it seems to be throwing off the game’s balance? It’s gone. Glitches discovered in a new map element? They’re patched. A video blows up demonstrating a hilarious outcome all set in motion by seemingly inconsequential design decisions? Bam, it’s memorialized in-game within days.

The best part: If you go down there to check out the tombstone… you might not make it out alive yourself.