Hello And Welcome Back To The Latest Edition Of All The Cryptos Are Getting Rekt Right Now.

Crypto bloodbaths have become fairly common in 2018 — mainly becauseÂ of the insane growth in 2017 — but we’ve not covered them all because they are so numerous and often include so-called ‘flash crashes’ or small drops, but the fall happening today is worth noting for several wider reasons.

Primarily that’s because this is a major test for Ether — the token associated with the Ethereum Foundation that isÂ the second largest cryptocurrency by volume — has been on a downward spiral with little sign of change.

Ether, which is the preferred platform of choice for most developers building on the blockchain, is down nearly 17 percent over the past day. That’s erased billions of dollars in paper (crypto) value as the bear market for cryptocurrencies continues to pull markets south.

The drop also marks the first time ever that the price of an Ether has fallen below its valuation over one year: one Ether is worth $266 right now at the time of writing, versusÂ $304 on August 14 2017. The token has been steadily falling since earlyÂ May, when its peak value was $808, and as the lynchpin for many ICO project tokens, its demise has sent the value of most other tokens down, too.

Just looking at Coinmarketcap.com this morning, all but two of the top 100 tokens are down over the last 24 hours with many losing 10-25 percent of their value over the past day. Bitcoin, too, has dropped below $6,000, having topped $8,000 for a time last month.

Ether’s plummet below $300 has sparked a mixed debate among those in the crypto community. The token had been held as visionary, an improvement on Bitcoin that gives developers a platform to build on — whether it be decentralized apps, decentralized systems or more — but that hasn’t been reflected in in this months-long price retreat.

Certainly, two founders who spoke TechCrunch and have held ICOs expressed a belief that Ether “needs to find some price stability” to allow the focus to become about product and not just ‘get rich’ speculation. Of course, it helps that the two founders and many of those who held token sales have long since sold the Ether or Bitcoin they raised in exchange for fiat currency.Â Indeed, if their token sale was last year, the chances are they got a lot more real-world cash than they initially bargained for or would get now.

But still, the idea of consistency is shared by others who are in crypto professionally. That includes investors like Kenrick Drijkoningen, who is in the midst of raising a $10 million fund for LuneX, a spinout of Singapore-based VC firm Golden Gate Ventures.

In an interview last week,Â Drijkoningen told TechCrunch that raising a fund and doing deals in a ‘low tide’ market like now beats attempting to do the same amid a frothy period with hype and peak valuations — one Ether was worth nearly $1,400 in January, for example. A number of others VCs have long said that, ultimately, stability is good for the ecosystem. 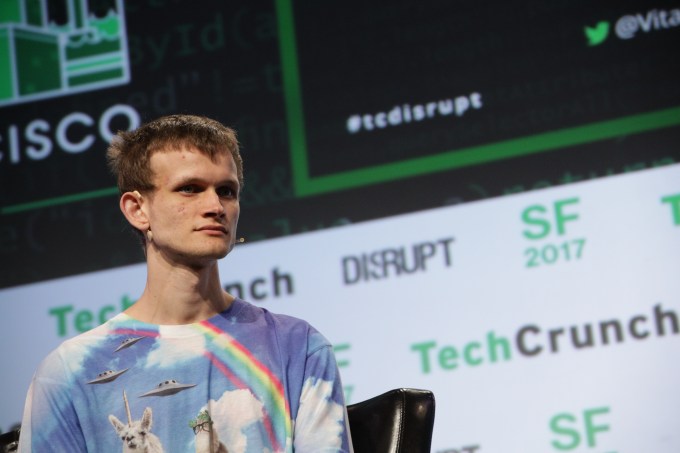 Vitalik Buterin is the creator of Ethereum

But, on the other side, there are more pessimistic voices.

Among some investors canvassed by TechCrunch, the sense is that with the downturn of the ICO funding boom that fueled much of Ethereum’s rise, there may be less incentive to hold as the broader market’s interest in the cryptocurrency wanes.

For one Bitcoin bull, the intrinsic value of Bitcoin as an immutable, decentralized ledger acts as a more powerful draw than the perceived mutability and centralization that the Ethereum platform offers.

“People are also beginning to understand the unique value of an immutable, decentralized ledger, and recognize that Ethereum is not that,” the investor wrote in an email.

Another long-term problem that Ethereum faces, according to this investor, is that the promise of decentralized apps backed by the token is yet to be released. Crypto Kitties, a smash hit earlier this year, has faded and now there’s competition asÂ Bitcoin’s Lightning Network is adding nodes and apps — referred to as LAppsÂ — which can operate in a similar but leverage the Bitcoin ledger.

It’s still early days, of course, and markets will always rise and fall, but this is the first big test for Ether and Ethereum. Beyond the sport of price speculation, it’ll be worth watching to see where this heads next.

Note: One of the authors of this post — Jon Russell — owns a small amount of cryptocurrency. Enough to gain an understanding, not enough to change a life.