Flash, the stealthy mobility startup from Delivery Hero and Team Europe founder Lukasz Gadowski, is de-cloaking today, with news that the Berlin-based company has raised a whopping â‚¬55 million in Series A funding.

Despite rumours that multiple VC firms would be involved, the bulk of the new funding comes from Target Global via its mobility fund, which led this round and was already an existing backer of Flash. Others participating in Flash’s Series A include Idinvest Partners, Signals Venture Capital and a number of unnamed angel investors.

Notably, Gadowski is listed as an Entrepreneur in Residence at Target Global, and has been broadly working in the mobility space for the past two years. Rather quietly, he is also an investor in Grin, the Mexico City-based electric scooter company backed by Y Combinator.

In a call with Gadowski, he filled in many of the blanks relating to his new venture, including positioning Flash as a “micro-mobility” company that wants to solve the last-mile transportation problem. The startup is initially entering the e-scooter rental space, but this is just the beginning, he says. More broadly, the way he and his team think about Flash is that it is “unbundling” the car, with new forms of transport.

“In a few years time, micro-mobility will look very different from today,” says Gadowski, revealing that before founding Flash last year, he also took a hard look at new forms of aviation.

Even though it is still very early days for Flash, the startup already boasts a current team of more than 50 full-time employees, recruited from the likes of Uber, Amazon, and Airbnb. Alongside Gadowski, the other Flash co-founders are Carlos Bhola (Corp. Development) and Tim Rucquoi-Berger (Supply & Operations). 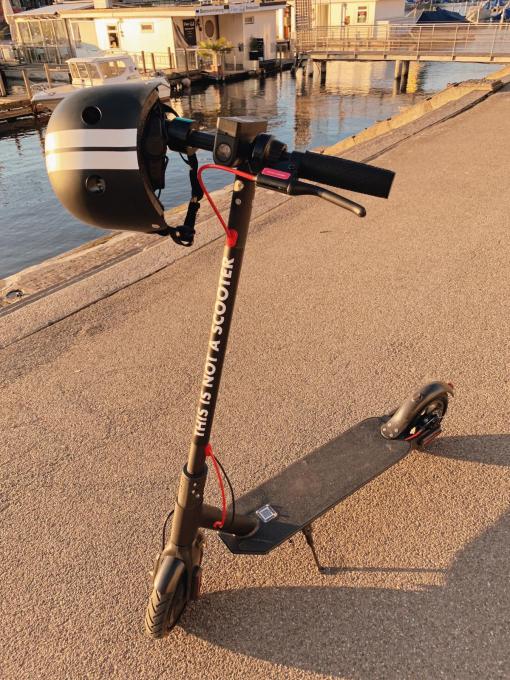 “This is not a scooter” – Flash branding in stealth mode

Notably — and definitely quietly — Flash is already operating in Switzerland and Portugal, with plans to launch into France, Italy and Spain in spring 2019, and in the rest of Europe in summer 2019.

The existing launches have been soft-launches, to say the least, with Flash e-scooters not initially carrying the company’s branding, instead sporting the label “This is not a scooter,” part in-house word play, part a statement of intent. Not just another scooter company might be an even more apt label if Gadowski’s longer-term ambitions are realised.

Perhaps more of a product-market-fit trial than anything else, Flash has initially used off-the-shelf e-scooters at launch, whilst simultaneously developing its own hardware and technology. The startup is headquartered in Berlin, but Gadowski tells me the team was first posted in China, establishing a supply chain and other partnerships that he believes can help give Flash the edge.

I put to him a common belief amongst some VCs that the e-scooter space in Europe is heading for a bloodbath that will continue to see a huge amount of venture capital pumped into the space, and subsequently many losers and a lot of money lost.

Gadowski appears for the most part unfazed by the swelling of competition coffers, although he does concede that the current “land grab” is forcing Flash to move slightly faster than it might have done otherwise. In some ways, he would have preferred to continue a more staggered, cautious roll-out, describing the startup as “product-first and multi-vehicle,” and says its customers are not just users of the service but local residents more broadly and the authorities with which it needs to coordinate. “Mistakes can be a lot more serious than at Delivery Hero, safety is involved,” he cautions.

The size of recent funding rounds in the space has also surprised him. However, he doesn’t think this is a “Facebook scenario,” where there will only be a single winner. Several micro-mobility companies can happily co-exist, he says, and the early movers are helping to pave the way for others, including Flash.

I suggest that the e-scooter land grab at its current pace also has a high chance of provoking a backlash amongst consumers and/or authorities, perhaps after a more serious safety accident or other source of reputational damage. Gadowski concedes this is definitely a “short-term” risk, but says there is so much determination by governments and local authorities to solve congestion and the last-mile problem, he doesn’t believe it will be a long-term one.

Finally, I asked Gadowski if he is considering acquiring smaller e-scooter startups in Europe (or perhaps elsewhere), as part of a roll-up strategy that would help the company leapfrog competitors. He declined to rule out acquisitions entirely — Delivery Hero was very effective in this regard — but said it doesn’t make much sense right now as hype in the space has pushed valuations way up. A more likely scenario, he says, is investing in or acquiring startups that can help with other aspects of the business, such as in the supply chain.

What are some of the Best Accessories to Pair Up with Your iPhone XR? SimplyCook dishes up Â£4.5M Series A for its subscription-based flavourings and recipe service