The future of AR/VR could be bright, but only if it moves beyond where it is today. 2018 was the first of what look like two transitional years, with a potential shakeout in 2019 before an inflection point in late 2020. Letâ€™s look at where we are today, where weâ€™re heading tomorrow and some of the changes needed to get us there.Â (Note: There were earlier generations of AR/VR, but this discussion focuses on the post-2014 market.)

AR/VR installed base (including mobile AR) 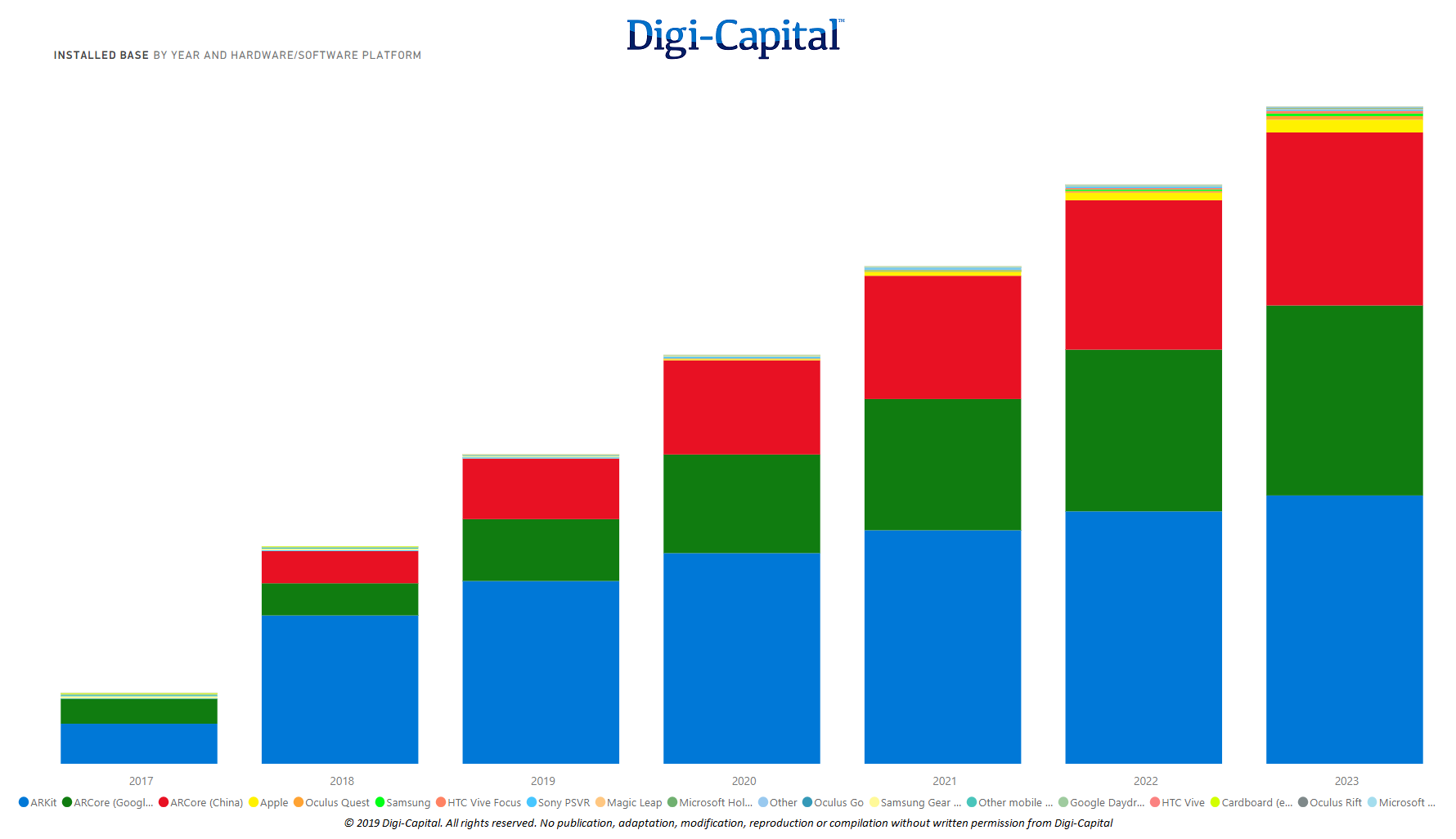 AR/VR 1.0 kicked off in earnest when Facebook bought Oculus back in 2014. This inspired a generation of entrepreneurs, corporates and VCs to build early-stage AR/VR. Despite significant technical progress, even industry insiders admit this hasnâ€™t produced a mass market yet.

Smartglasses had a mixed 2018, withÂ Microsoft HoloLens winning a $480 million U.S. military contract,Â Magic Leap launching more of a dev kit than a consumer product and other early smartglasses pioneers reported to beÂ selling assetsÂ orÂ furloughing staff. Smartglasses revenue (mainly hardware and enterprise solutions/services) was in the hundreds of millions of dollars, which together with mobile AR delivered total AR market revenue 3 percent lower than anticipated. So as in the last three years, AR revenue was broadly in line with Digi-Capital forecasts.

For VR, at the start of last year we didnâ€™t anticipateÂ phone makers largely abandoning mobile phone pre-order headset bundlesÂ (negatively impacting mobile VR sales/installed base significantly), and got timing wrong for Oculus Quest launching in holiday 2018 (announced late last year asÂ Spring 2019). TheÂ mid-year launch of Oculus GoÂ and ourÂ accurate forecast of Sony PSVR salesÂ helped, but together with attrition rates, the VR market was down year-on-year for 2018 in terms of unit sales, installed bases and revenue at less than $3 billion (rather than the modest growth we forecast). 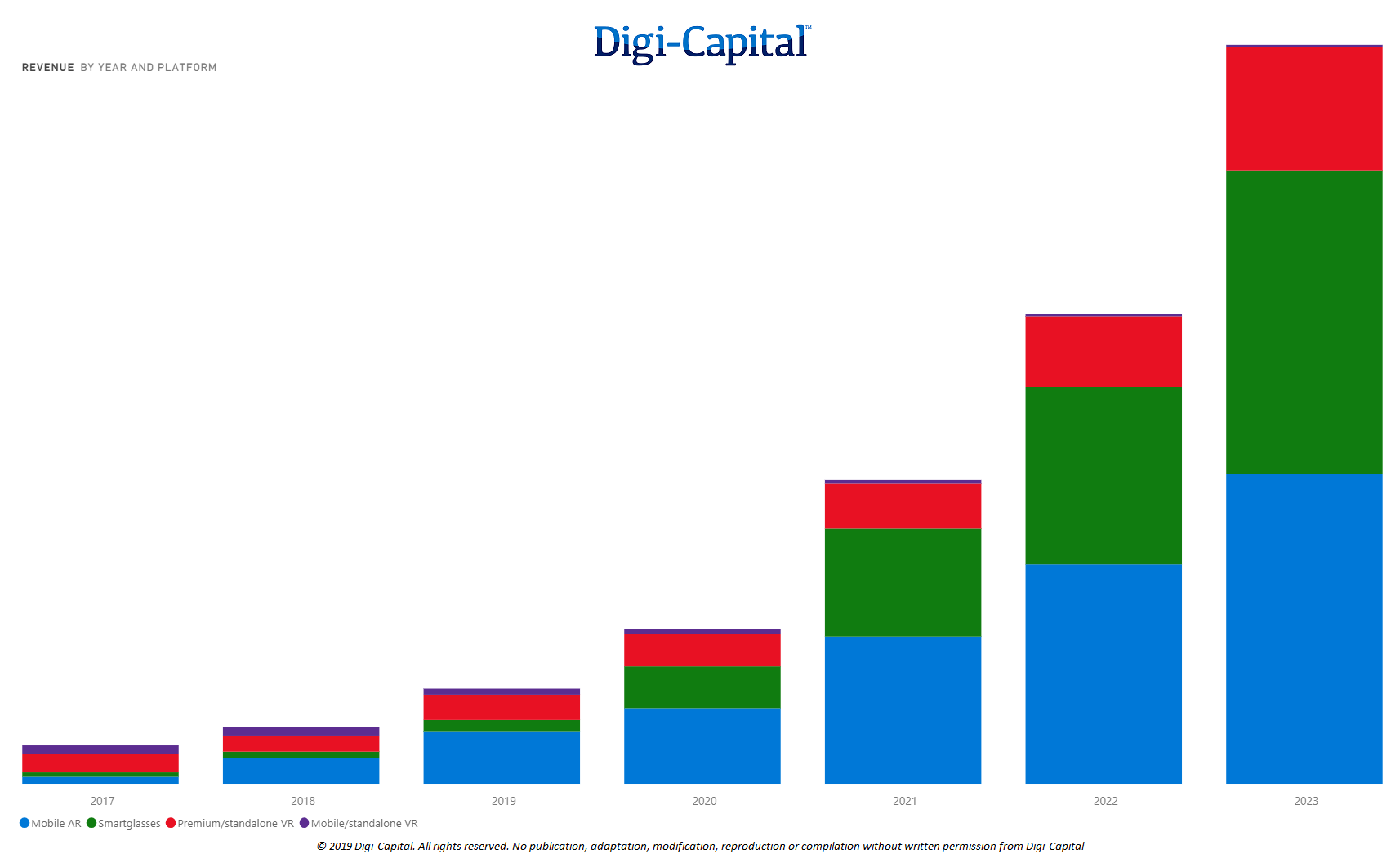 Thatâ€™s still a big number, but the growth curve it implies now means that our AR/VR Analytics Platform forecasts ARCoreâ€™s installed base trailing Apple/Facebook until 2021. So while ARKit and Spark AR growth paths remain on track with previous forecasts, a slower growth path for ARCore means there could be a total mobile AR market installed base just over two and a half billion globally by 2023. Again, still a big number, just not as big as originally anticipated.Â 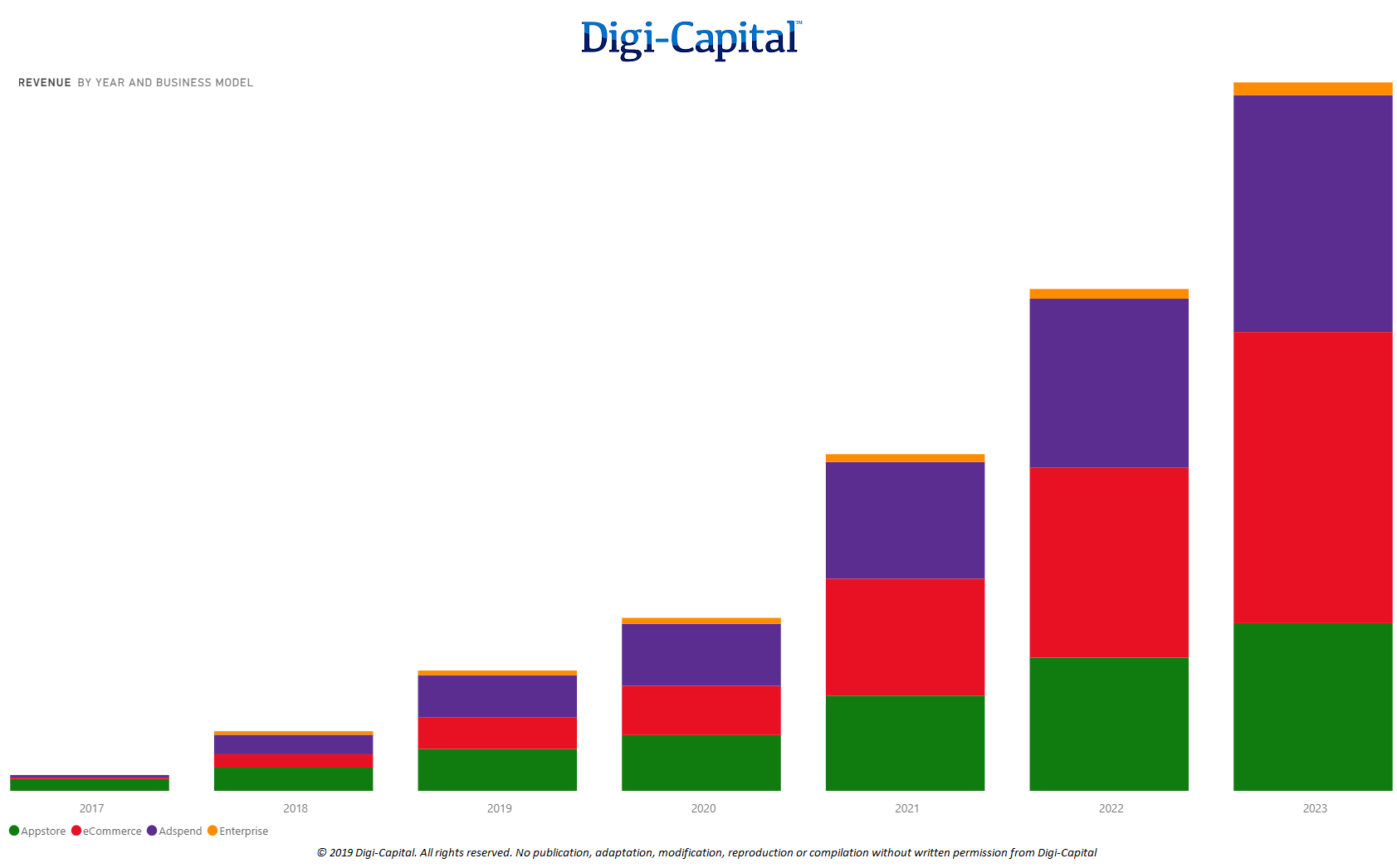 E-commerce across 10 major categories (from cars to clothing to toys) looks set to be mobile ARâ€™s largest revenue stream, which together with ad spend across 11 major advertiser categories (from retail to CPG to travel) could deliver three quarters of mobile AR revenue long term.Â 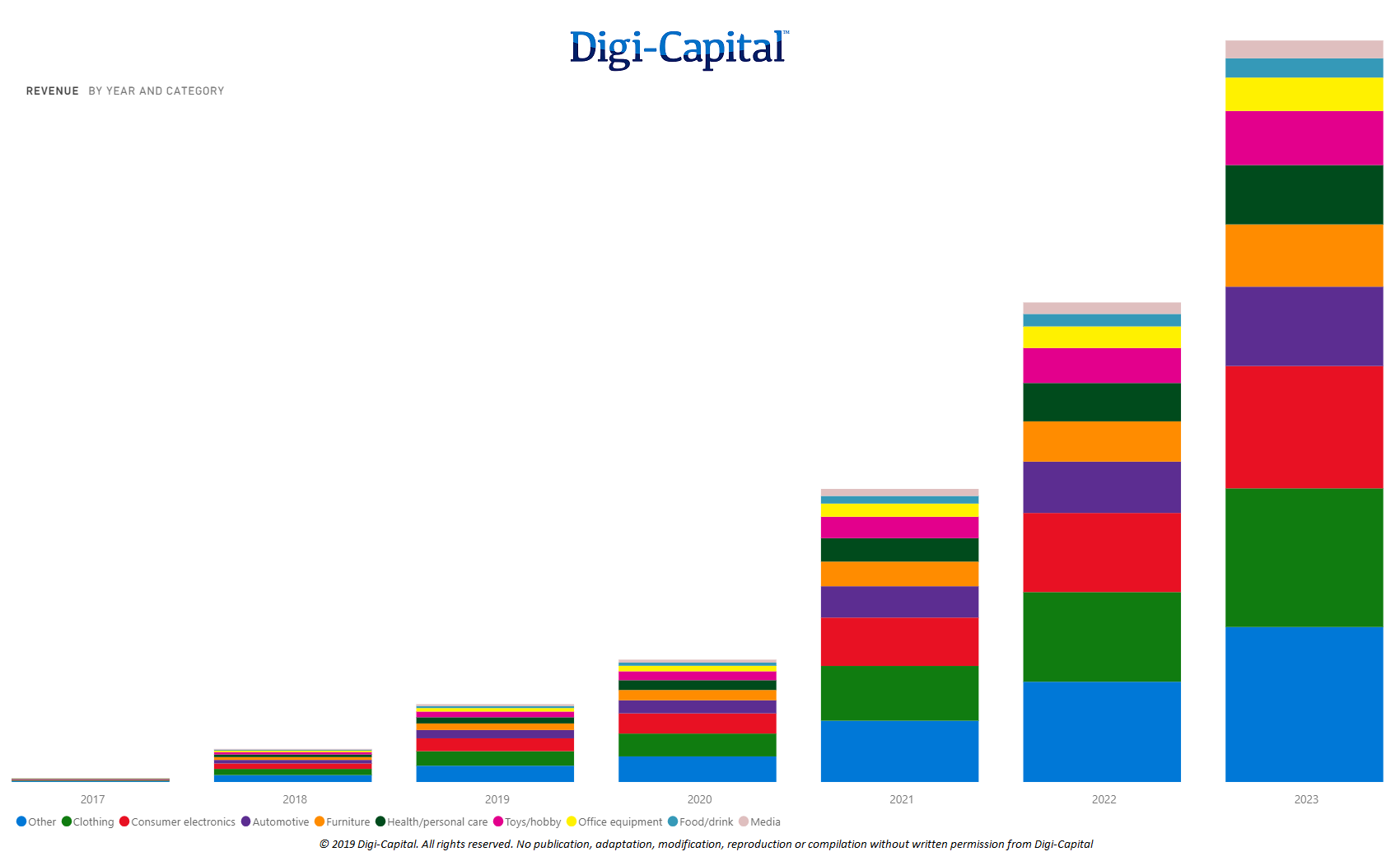 Mobile AR app store revenues (in-app-purchase/premium) remain dominated by games (primarily PokÃ©mon GO) today, but mobile ARâ€™s installed base and increasing adoption as a feature in mainstream apps could see non-games categories take more than half the mobile AR app store revenues by 2023. As with the overall mobile market, it could remain difficult for standalone mobile AR apps to rise to the top of app stores. Mobile AR growth could have more to do with mobile AR features in ubiquitous apps than new standalone apps. 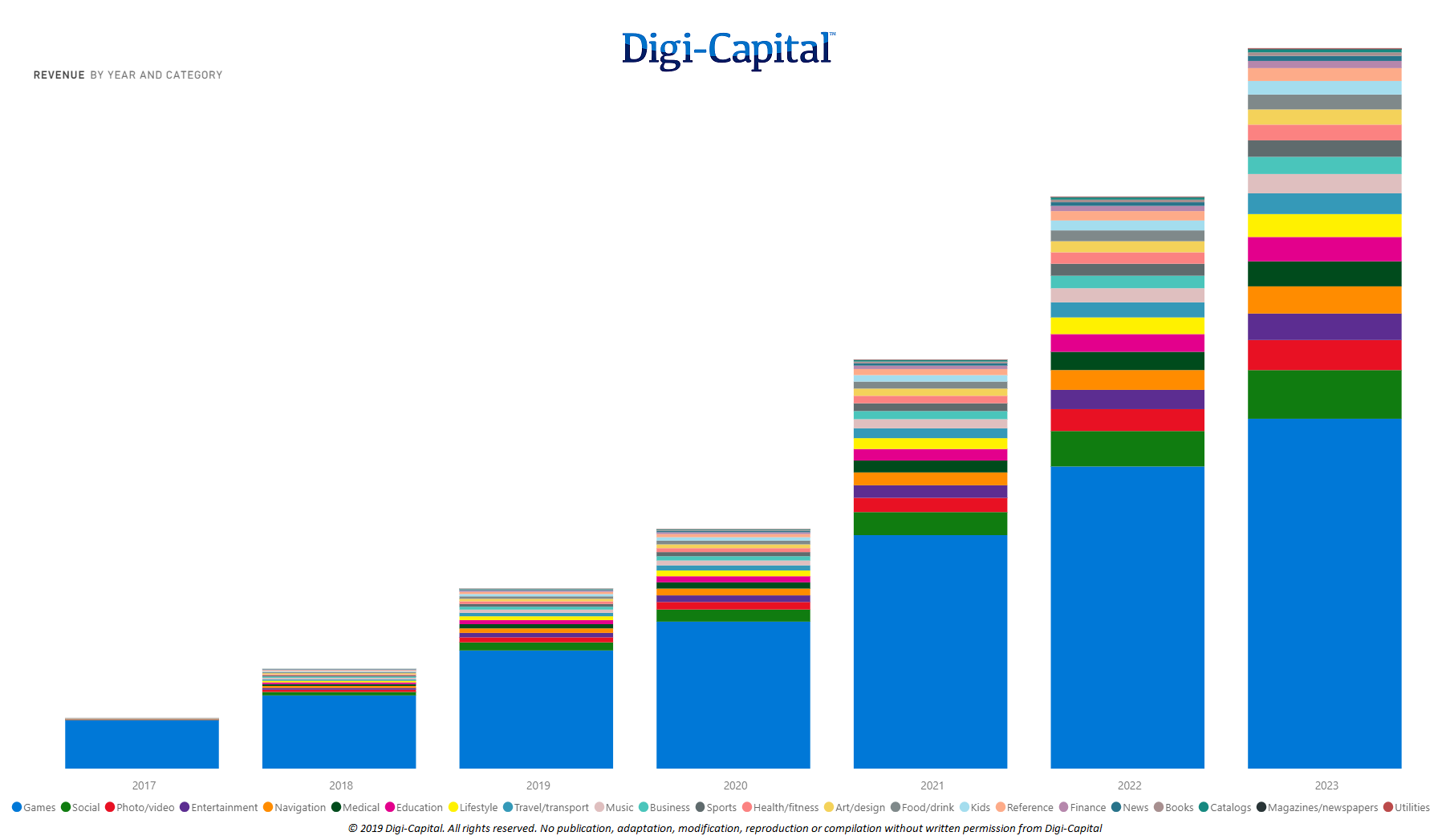 Smartglasses have to deliver on five major challenges before they can become mass market consumer devices: (1) hero device (i.e. an Apple quality device, whether made by Apple or someone else), (2) all-day battery life, (3) mobile connectivity, (4) app ecosystem and (5) price. Together, these are non-trivial problems, and could see smartglasses remain mainlyÂ enterprise focused through the middle of 2020. Smartglasses device sales could stay in the hundreds of thousands of units globally this year. 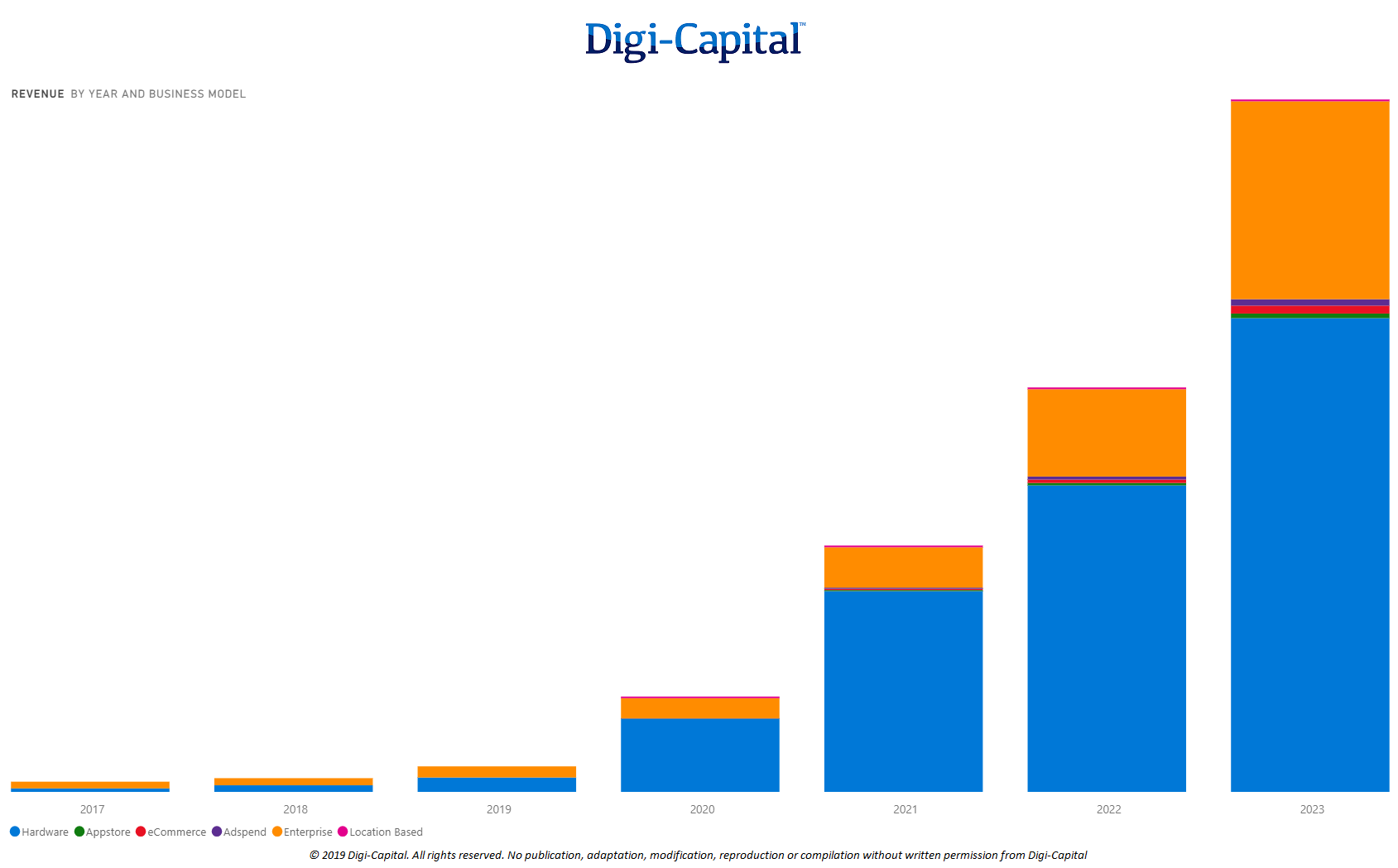 If Apple launches iPhone-tethered smartglasses in late 2020 (as weâ€™ve forecast since 2016), the AR/VR market could finally see its inflection point. Nonetheless, long-term smartglasses revenues could remain dominated by hardware and enterprise (ex-hardware) revenues through 2023. The mass market for consumer smartglasses still looks a long way off, even with Appleâ€™s entry.Â 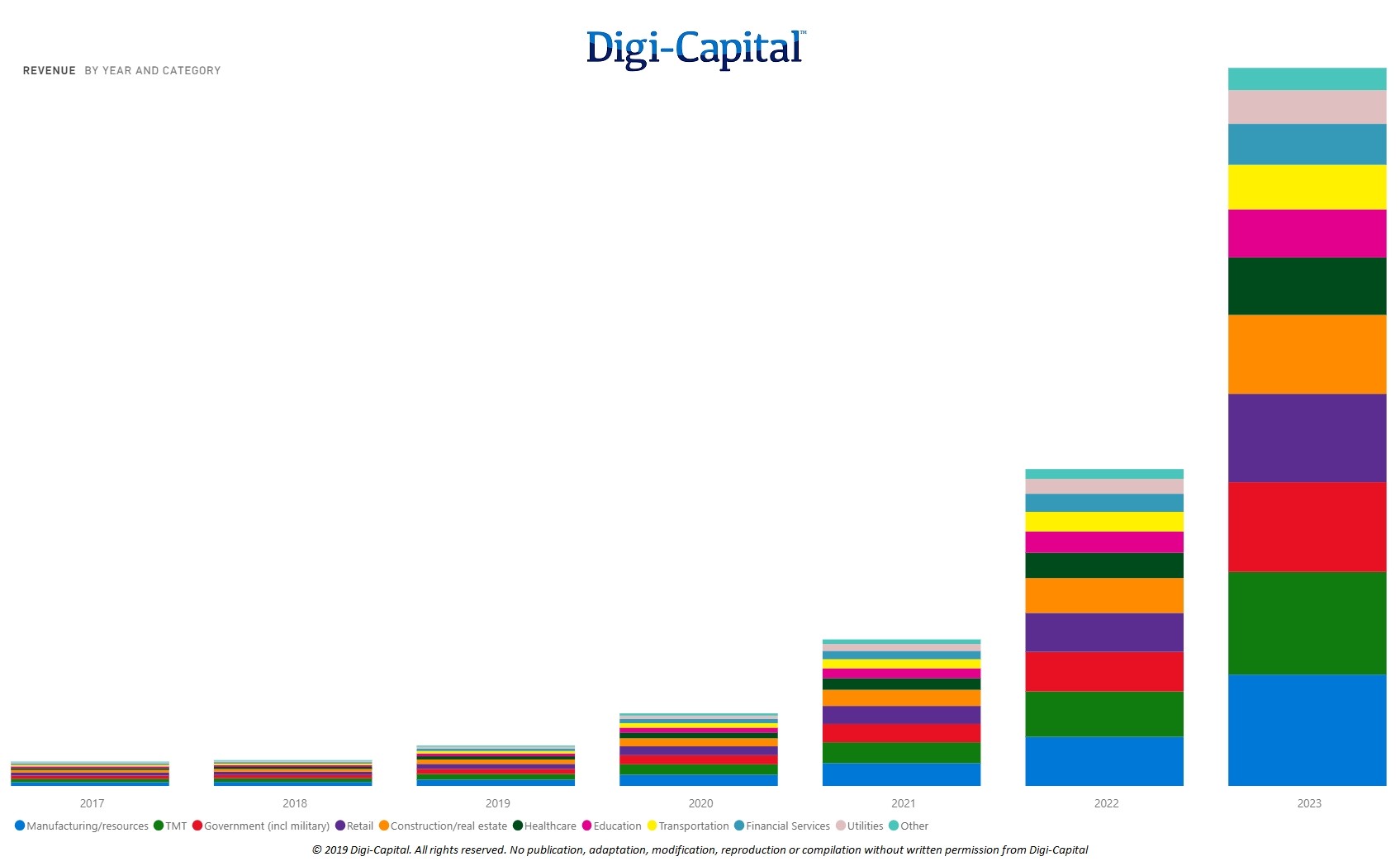 VR could return to modest growth this year, and remain dominated by hardware and games revenues. The second generation of premium standalone VR headsets (not those launching this year) could become a catalyst in the 2020/2021 time frame. For this to happen, they will need to deliver greater performance and better content at lower prices. Hopefully by that time we could also see VR platform holders simplify their product ranges from their current platform fragmentation (taking a page out of Steve Jobsâ€™ 1997 playbook). 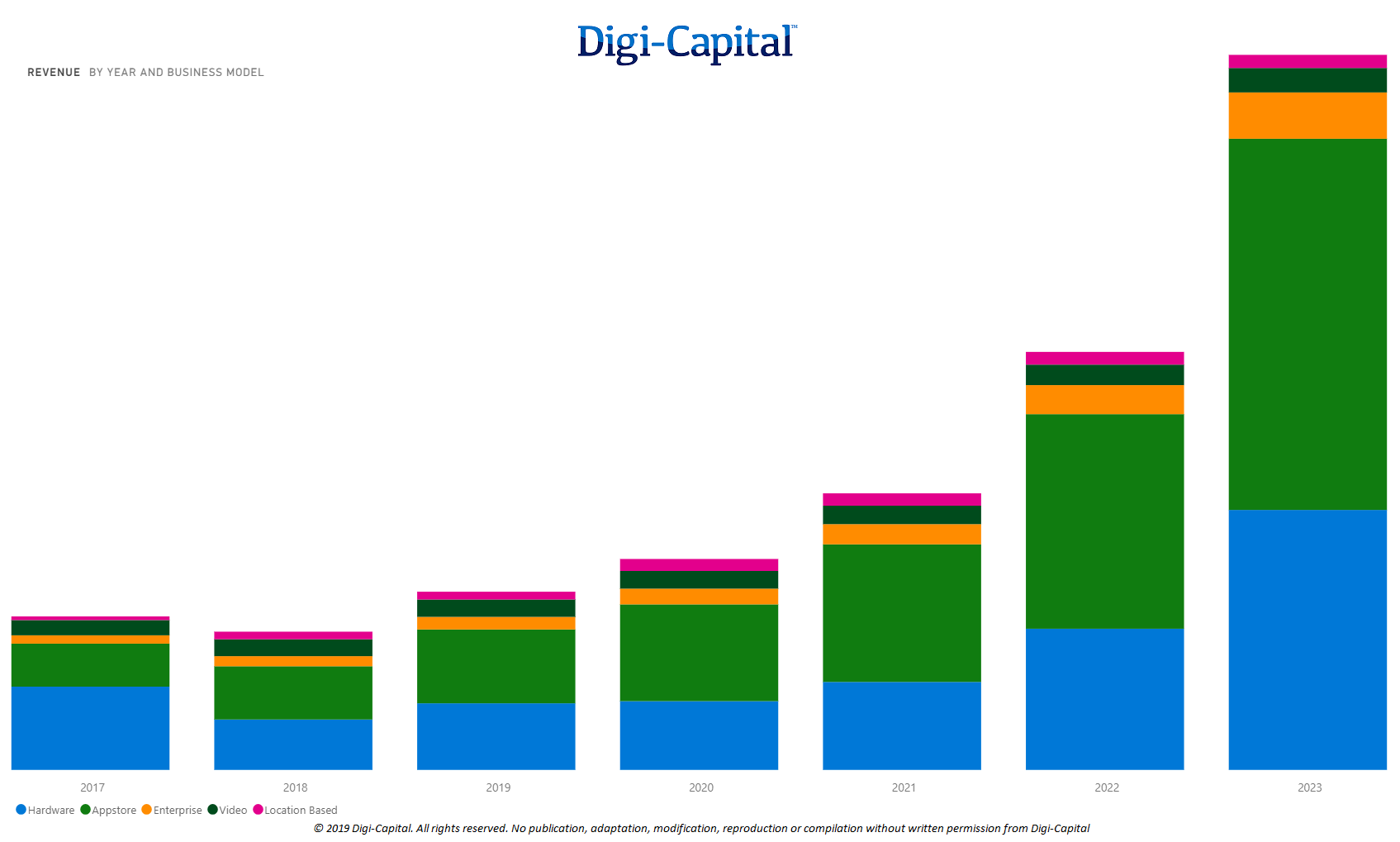 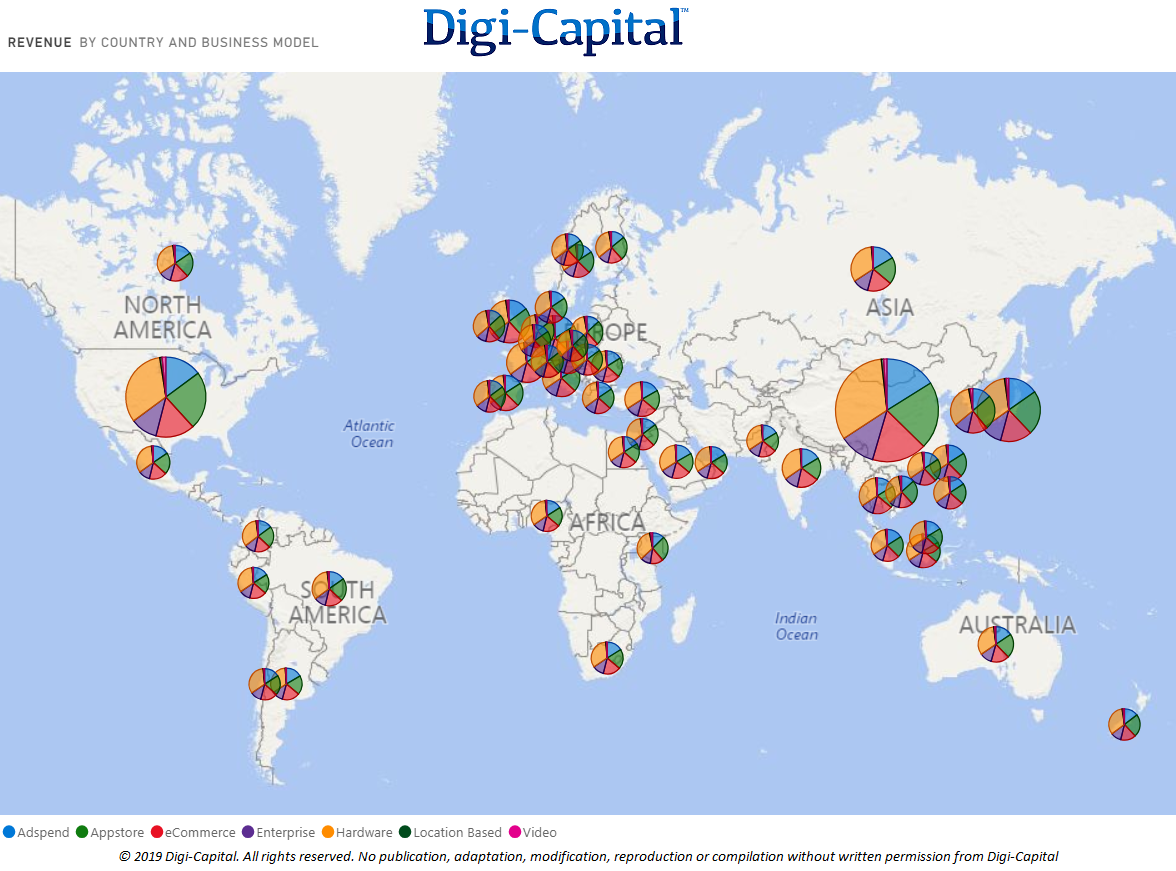 Asia is set to dominate AR/VR for the next five years, driving more revenue than North America and Europe combined by 2023.Â Chinaâ€™s commitment to the marketÂ is a standout, and it could remain the largest single market for AR/VR long term.

High friction to low friction: A large part of AR/VR 1.0 remains high friction in terms of installation, UX and UI. In many ways the market today looks like the MP3 player market before Steve Jobs launched the iPodÂ (keep that analogy in mind). AR/VR 2.0â€™s lower friction is in the works, but whatâ€™s needed here are Apple smartglasses (whether they call them iGlasses or something else), the second generation of premium standalone VR (that comes after Oculus Quest and HTC Vive Focus) and mobile AR developers innovating beyond the lessons learned from Niantic, Houzz and others.

Experiences to use cases: There have been many â€œexperiencesâ€� during AR/VR 1.0, with visually stunning apps not delivering meaningful UX. An AR/VR dragon or portal is impressive the first time you see it, but gets old pretty quickly. The next stage of AR/VR must deliver against critical use cases, with features in critical apps that we use all day, every day.

Standalone to features: The industry has largely focused on standalone apps to date, but major features in apps we use every day could see higher usage and prove more commercially successful. Navigation (Google Maps), e-commerce (Amazon,Â Walmart,Â Alibaba) and messaging (Facebook Spark AR,Â Snapchat Lens Studio) are beginning to show how this might happen.

Expensive to good value: Early AR/VR has ranged from $3,000 HoloLens to $200 Oculus Go to free mobile AR. But competing platforms often deliver more for less outside of specific use cases, particularly where we already own them, as with mobile. AR/VR 2.0 needs to become a great value because of what it delivers to users regardless of price point.

Point solutions to ecosystem: Many early AR/VR apps have been entertainment (games, video) or standalone point solutions to specific problems. As weâ€™ve discussed before,Â AR/VR needs its own reality ecosystemÂ to scale.

Low ROI to high ROI: For consumers, this means apps that give back more than just a â€œwow,â€� and for enterprises, applications that deliver real return on investment. This is beginning to happen in enterprise with companies like Lockheed Martin andÂ Bell.

Inside baseball to brands:Â TheÂ AR/VR industry is still debating the merits of using AR, VR, MR, XR or spatial computing to describe itself, as well as spending a lot of time focused on internal plumbing across the stack. But consumers and enterprises outside of early adopters donâ€™t care. They buy brands that deliver against critical use cases rather than just tech, which requires a clearer focus on users and how to market to them to succeed.

Fragmentation to dominance: AR/VR 1.0 remains fragmented across both hardware and software, despite its early stage and relatively small user bases.Â The industry now appears to have made up its mind on which platforms matter, so natural selection could thin the herd to a few dominant players in each part of the market.

Blue Sky to data driven: Many AR/VR 1.0 companies have been coy about their numbers, with independent data sources hard to come by in the early market. Developments likeÂ Digi-Capitalâ€™s AR/VR Analytics PlatformÂ have made it difficult to hide, with hard data/analytics now available to answer granular questions about roadmaps, country rollouts, investments, valuations and more.

VC-funded to cockroach/money making:Â Well-funded pioneers began to exit the marketÂ last year, with 2019 potentially seeing a major shakeout of companies that arenâ€™t at least breaking even. TheÂ U.S. AR/VR investment market began to reverse its decline in Q4 2018 (even as Chinese investment accelerated), but making money and â€œcockroachingâ€� burn rate could be more important than VC money in AR/VR 2.0.

Everyone else to Apple: If Apple launches smartphone-tethered smartglasses in late 2020, AR/VR 2.0 could have its â€œiPod moment,â€� where a major new form factor introduces the starting point for a long-term mass consumer market. Itâ€™s worth noting that this might not be the industryâ€™s â€œiPhone moment,â€� as even with this catalyst we arenâ€™t looking at a mass consumer market in the next five years.

Denial to acceptance: 2019 isnâ€™t the â€œYear of AR/VR,â€� and Mark Zuckerbergâ€™s â€œ1 billion people in VRâ€� might never happen.Â Markâ€™s come to terms with it, so hopefully a sense of cautious optimism could prevail during the next stage of the market. 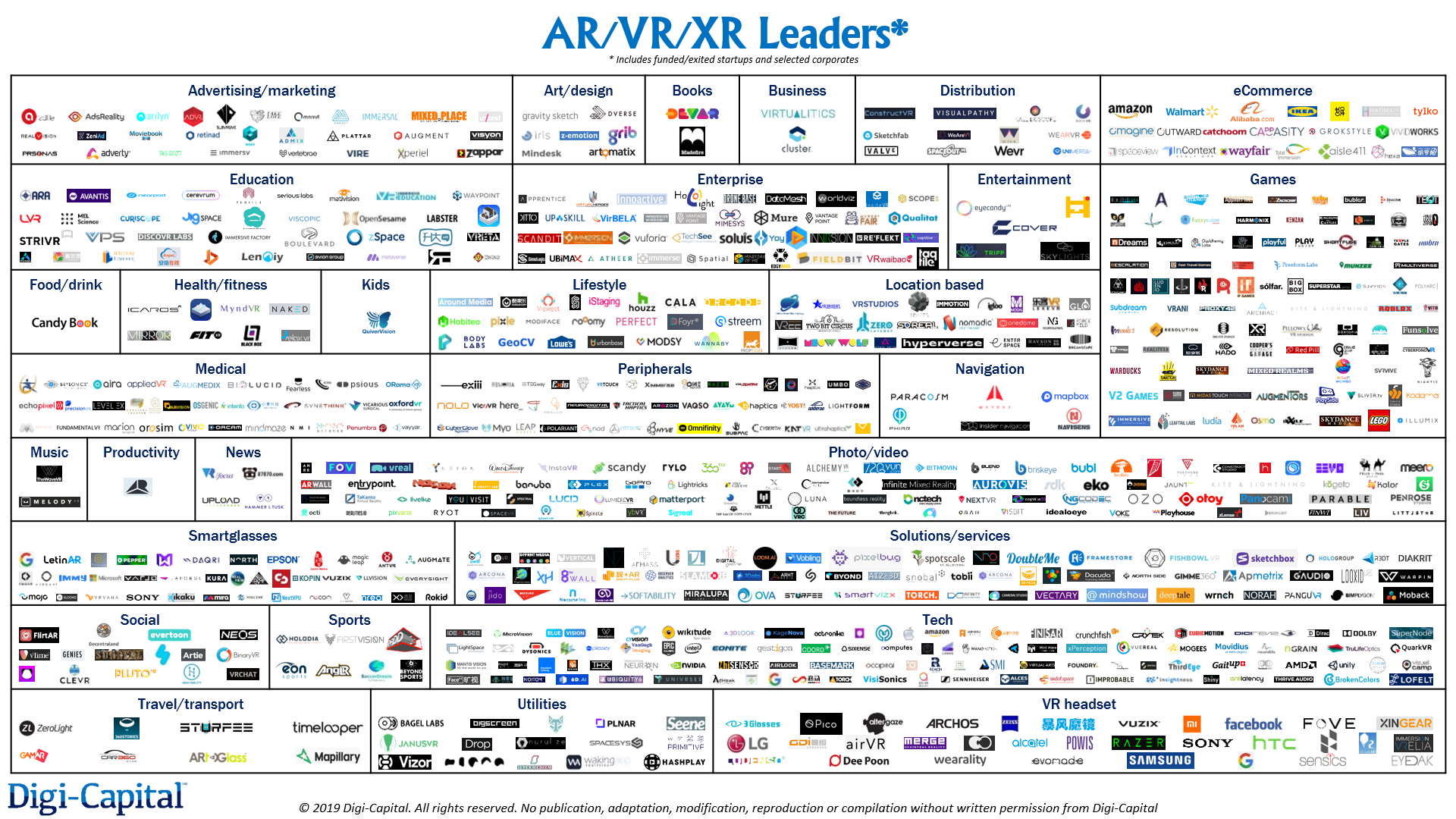 Even though weâ€™re looking at a potential $80 billion to $90 billion AR/VR market by 2023, AR/VR 2.0 wonâ€™t be the finished article. That could take a lightweight pair of standalone smartglasses, capable of replacing your iPhone at the same price. There are formidable technical and content challenges to reach that vision of AR/VR 3.0, and thereâ€™s AR/VR 2.0 to navigate first.

Itâ€™s going to be an exciting time, and we canâ€™t wait to see what comes next.