It has the feel of a science fiction plot. A young man heads online to look up deals on things he likes.

Slowly, the tables turn. Now, itâ€™s the computer that starts telling him what he wants. Buy these pants. Play this song. Eat this pizza. Date this girl. Read news with this political spinâ€¦

OK, I lied. This isnâ€™t sci-fi at all. Itâ€™s the current reality. And itâ€™s the kind of thing venture capitalists seem keen on funding.

An analysis of Crunchbase data shows that global venture funding for personalization and recommendation platforms has surged in recent quarters. Investors are pouring billions into the space, creating a string of newly minted unicorns relying on algorithms to customize music streams, news feeds and much more.

Exits are also riding high for software-driven tastemakers. Recent ones include Spotifyâ€™s smash IPO, along with China-based news aggregator Qutoutiao, which is poised to go public at a multi-billion-dollar valuation.

Herein we take a look at where the money is going, how it could accelerate and the changing nature of how we find new things to like.

Before we go further, letâ€™s define the personalization category. Essentially, weâ€™re looking at business models that involve using software to match humans with things they might want to consume. This could be music, news, handbags, wine, other humansÂ and lots more.*

Personalization isnâ€™t generally considered a discrete sector. To use a cooking metaphor, itâ€™s sort of like chicken. Itâ€™s not a cuisine so much as an ingredient you can dress up in almost any culinary style. Likewise, you can add software-driven personalization and recommendations to a wide variety of businesses focused on e-commerce, digital media, food delivery and so on.

Itâ€™s apparently a useful ingredient for driving up valuations. In the table below, we lay out some of the recent and most significant funding rounds for companies in a range of sectors that are deploying software-driven personalization and recommendation models. 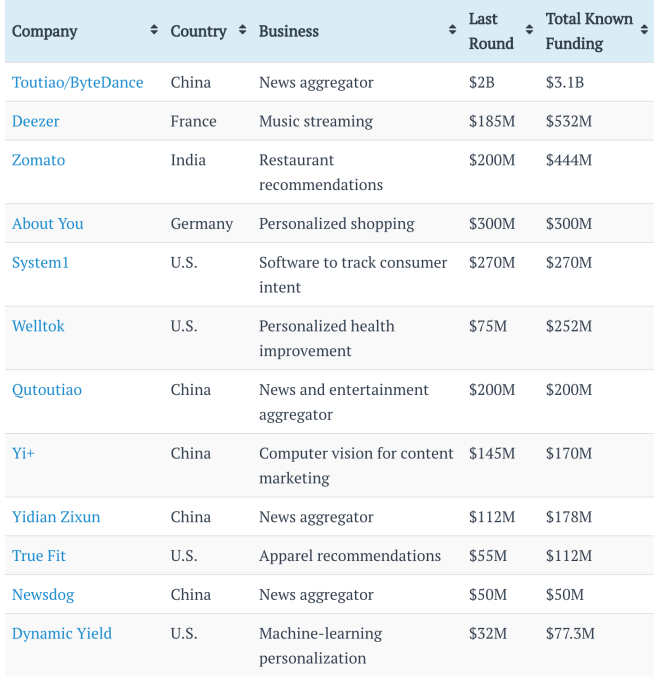 The list represents more a sampling than a comprehensive data set, as a significant number of companies incorporate some form of software-driven personalization. We also mostly left out the enormous and heavily funded set of startups that rely on a combination of software and actual humans to deliver recommendations.

As you can see from the selected list above, those securing the largest rounds are a globally diverse bunch. Having a computer tell you what you want is a market niche that transcends national boundaries.

Lately, the biggest chunk of funding is going to China-based news and entertainment aggregators.

Six-year-old Toutiao is climbing the unicorn ranks at a remarkable pace. Its parent company, Beijing-based Bytedance, has raised more than $3 billion to date and is reportedly seeking new funding at a $75 billion valuation. With active users in the hundreds of millions, its success stems from the use of machine learning to figure out peopleâ€™s interests and offer up content theyâ€™ll click on.

At least three other China-based news and entertainment aggregators have raised $50 million or more in fresh funding since last year, including public market-bound Qutoutiao, loosely translated as â€œfun headlines.â€� The company describes its value add as providing technology-based â€œcontent personalizationâ€� to help users navigate the exponential growth in online offerings.

And then thereâ€™s iQiyi, the company sometimes called the Netflix of China. It scored one the yearâ€™s largest IPOs, and it was recently trading at around a $21 billion valuation.

For the U.S. market, meanwhile, the companies most closely associated with software-driven personalization have been public for quite some time.

Netflix, now valued at around $160 billion, went public 16 years ago. Google acquired YouTube back in 2006. And Amazon.com has been serving up algorithm-driven suggestions of what to buy for two decades.

Articles on the oddities of software-driven video recommendations date back to at least 2002. By now, Americans are pretty used to apps attempting to make our shopping and binge-watching selections. While occasionally creepy, it can also be convenient.

So whatâ€™s next on the personalization horizon? Looking at funded startups, itâ€™s apparent thereâ€™s an ongoing drive among retailers other than Amazon to take back some market share by offering a more customized shopping experience.

One startup working in the area is New York-based Dynamic Yield, which has raised $63 million since last summer to scale a machine learning-based platform used by retailers like Stitch Fix and Urban Outfitters to match shoppers with things to buy. Another is True Fit, which has raised more than $110 million to work with prominent apparel brands and retailers to match consumers with styles that fit and flatter.

Thereâ€™s a lot at stake. Research firm Boston Consulting Group predicts that personalization will push a revenue shift of some $800 billion to the 15 percent of companies that get it right.

Thatâ€™s a big number, and it underscores a rapidly changing shift in consumer behavior. Call it the age of the tasteful machine.

Of course, itâ€™s still possible to cultivate personal style and taste on your own. However, startup entrepreneurs, tech giants and venture capitalists seem to share a unified vision of software making a much bigger contribution to that effort.

As a result, what was once science fiction is now just becoming the way we shop.

* We decided not to include recommendation engines for financial services products and insurance. These are generally not so much tastemaking as matching products to an existing credit history and questionnaire answers.