Google wants to make the transition back into civilian life smoother for U.S. military veterans by adding tools that help them find jobs or promote their businesses.

One new feature is an initiative of Grow with Google, the companyâ€™s career development program. It helps veterans discover job openings relevant to the skills they learned while serving by entering the phrase â€œjobs for veteransâ€� into Googleâ€™s search engine along with their military job codes. Employers and job boards can also enable the feature on their own sites by using Googleâ€™s Cloud Talent Solution, a machine-learning based job search platform.

In a Google announcement, Matthew Hudson, a Google Cloud program manager and former Air Force civil engineer who served three tours in Iraq and Afghanistan, wrote that veterans often miss out on opportunities because “there isnâ€™t a common language that helps recruiters match a veteranâ€™s experience with the need for their skills and leadership in civilian jobs. As a result, 1 in 3 veteransâ€”of the roughly 250,000 service members who transition out of the military each yearâ€”end up taking jobs well below their skill level.”

For veterans who founded, own or lead a business, Google has added a new attribute to help identify them on Google My Business, Google Maps and mobile search listings. In a blog post, Google data scientist and former U.S. Army staff sergeant Sean Oâ€™Keefe wrote that more than 2.5 million businesses in the U.S. are majority-owned by veterans. The “Veteran-Led” attribute badge will appear on Google business listings alongside other attributes like “Has Wifi” or “Family Friendly.” 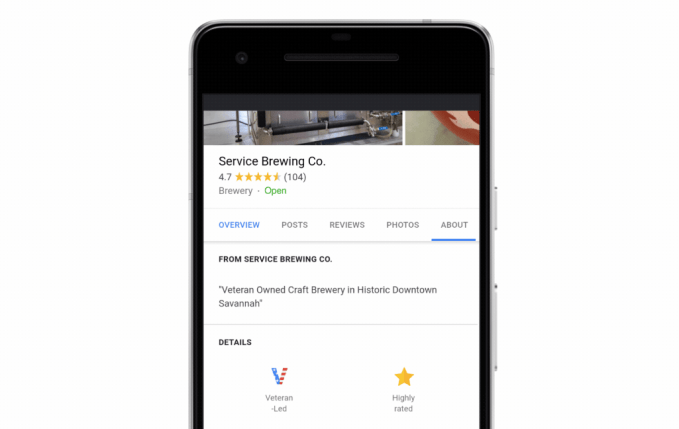 The company also said Google.org, its charity initiative, will grant $2.5 million to the United Service Organizations (USO) to provide IT training, career support and Google Support Professional Certification, a course designed to prepare people for entry-level IT support jobs.