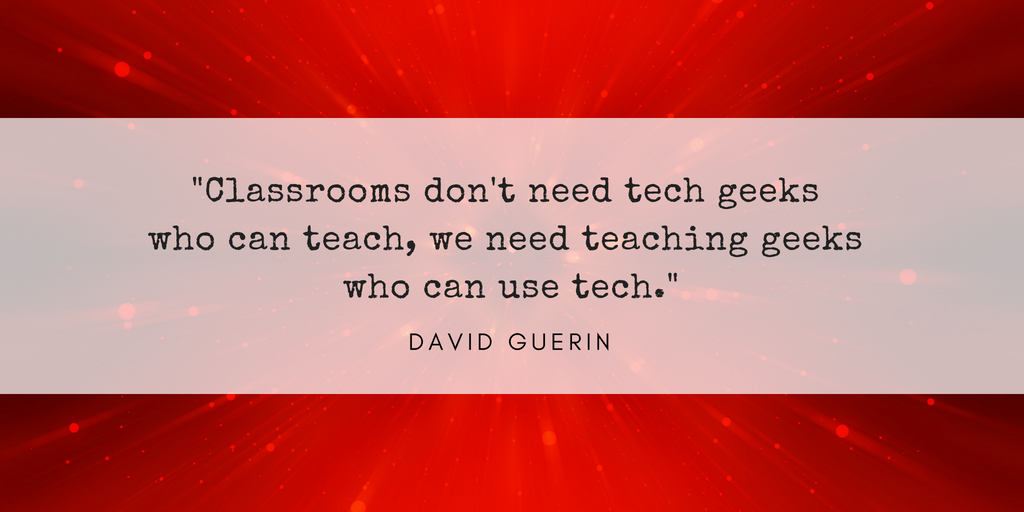 This quote is spot on! Nothing is more important in education than a good teacher — after all, they teach us HOW to think — something we will use every day for the rest of our lives. As a long-time tech coach, I have known many teachers who think they canâ€™t use technology and still be effective in â€œthe way they teachâ€�. I understand the hesitation. Change is scary, hard, and uncomfortable. So how can a tech coach help a tech-shy teacher navigate the transition to effective technology implementation? Letâ€™s first agree that technology:

The fastest and most powerful technology adoptions happen when a good, experienced teacher sees the potential of using a specific piece of technology to solve a specific instructional need. Enter the technology coach whose role it is to facilitate that connection. Dr. Ruth Okoye, SFLâ€™s Director of K12 Initiatives, shared the perfect example with me last week when we were â€œtalking techâ€�. Letâ€™s take a look at this classic case study.

Ruth worked with an older language arts teacher that was very set in her paper and pencil ways. Ms. D. was a second career teacher, a former banker, and she had a problem. At the start of the current school year, the principal had moved her from 4th to 6th grade, so everything was new. Additionally, there were a number of students who were failing miserably and she was not accustomed to this. As a matter of fact, of the four bells she taught, three of them were failing.

Ms. D. didn’t know how to do a quick formative assessment that could guide her reteaching. Her peers suggested whiteboard paddles but she thought they were clumsy and the kids didnâ€™t care for them. She was told that Ruth could help her and was honest about the fact that she didn’t believe it when she met with Ruth. Â It turned out that Ms. D had a couple of big misconceptions. First, she thought that she couldnâ€™t learn to work the technology. Second, she believed that Ruth only worked with younger teachers who were comfortable with technology. Ruth said, â€œlet me teach WITH you.â€� She agreed and so the journey began.

Ms. D had plenty of examples and material to use to reteach; she just needed to know WHAT and WHO needed to be taught. In the beginning, they did all the questions â€œon the flyâ€� during the review. Ms. D provided the questions and wrote both the questions and the answers on the whiteboard. Students voted using a class set of response devices, and it did not take long for them to catch on. When the teacher saw how quickly she could measure understanding and capture the data for later use, it changed everything. Broad content gaps could be handled in a large group and narrower issues could be retaught in small groups during the remediation block.

Ms. Dâ€™s technology journey was just beginning. She began using technology to support her set to activate schema. She also grew into using various technology tools as exit tickets. Somewhere along the way, the kids changed. Gone was the rowdy bunch that had difficulty with comprehension. Now the students began to focus more and to own their learning. Classroom management was no longer dominating class time. Best of all, it positively impacted the dynamic between the teacher and her students.

What is the bottom line? Give a tech coach a teacher that understands the science of teaching (pedagogy) and he/she will share the power of using technology to solve instructional needs, not just for the bells and whistles.

Are you an edtech coach? Let us know how you reach tech-shy teachers.