Home Sweet Haunt: Grief and Trauma Are the Specters of â€œThe Haunting of Hill Houseâ€� 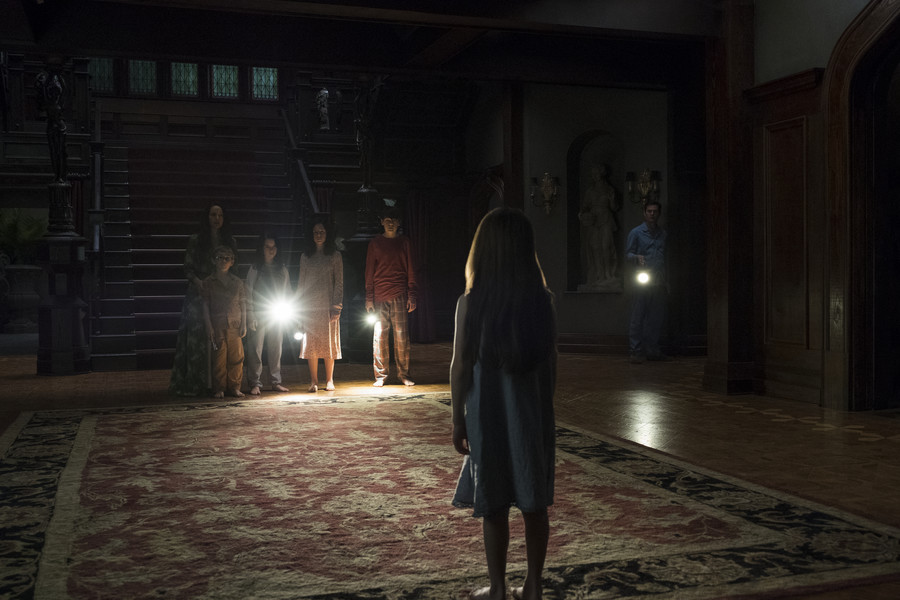 The Crains in The Haunting of Hill House (Photo credit: Steve Dietl/Netflix)

Spoilers below for The Haunting of Hill House

â€œHill House, not sane, stands against its hills holding darkness within. It has stood so for a hundred years and might stand a hundred more. Within, walls continue upright, bricks meet evenly, floors are firm, and doors are sensibly shut. Silence lay steadily against the wood and stone of Hill House. And those who walk there, walk together.â€�

Steven Crainâ€™s (Michiel Huisman) voice rings out over the empty, cobwebbed hallways and staircases of Hill House, delivering a eulogy for his childhood home and the family he lost there. In Shirley Jacksonâ€™s classic 1959 novel The Haunting of Hill House, three strangers come to Hill House to study paranormal phenomena. Nell, Theo, and Luke all experience bumps in the night and receive ghostly messages, but Hill House takes a special hold over Nell, who comes to believe itâ€™s her true home and intentionally crashes her car into a tree in the last pages.

The Haunting of Hill House has been adapted twice, in 1963 and 1999, but Netflixâ€™s new series adaptation expands beyond the novel by reimagining Hill Houseâ€™s visitors as the three youngest Crains, who, along with older siblings Steven and Shirley (Elizabeth Reaser), grew up in Hill House. The Crains flip houses and are remodeling remodeling Hill House so that they can afford their perfect â€œforever home.â€� Hill House is still haunted, though, and the family leaves in the middle of the night once they finally figure out that the house sees them as a tasty midnight snack.

Horror films frequently use the haunted house as a metaphor to address family and childhood trauma. In these narratives, survivors must return to the site of formative trauma to confront the past and bury it once and for all. For the Crains, that specter is the death of their mother, Olivia (Carla Gugino) at Hill House, an event none of the siblings fully understands, though it completely upturned their lives. A childhood spent in a haunted house is like Chekhov’s Gun principleâ€”itâ€™s going to come up in the second act.

Hill House follows two timelines: the Crain siblingsâ€™ horrific childhood, and a more intimate look at how that trauma and its aftershocks have dominated their adult lives. The Crains have tried to hide and push down their griefâ€”Theo through meaningless sex, Luke through drugsâ€”and each has maintained a facade in their relationships with each other, despite their shared experiences. Trauma holds such a primal place for the Crains and their perception of themselves that the siblings argue about their right to claim and discuss their childhood. Steven is a horror fiction writer, and Theo confronts him about a chapter in his book The Haunting of Hill House (so meta!) about the night their family fled Hill House, first telling him he got parts wrong and then, snapping at him, â€œSome wild stuff in there. That was really wild stuff considering that you were asleep for what, like 99 percent of it?â€� Dysfunctional, angry, and traumatized, the Crains have strained relationships with each other and barely speak to their father, but Nellâ€™s (Victoria Pedretti) death in the first episode forces the family to come together and finally face their trauma.

Most of the best moments from the book make it into the seriesâ€”Hill Houseâ€™s caretaker Mrs. Dudley warns Nell and Theo that no one is going to come help them in the night, in the darkâ€”and while the first few episodes might be disorienting for a viewer trying to situate the novelâ€™s narrative within the miniseries, the references to Jacksonâ€™s original pop up like lamplights, leading you deeper into the houseâ€™s mysteries. Broadening the narrative to 10 episodes lets the audience simmer with what they already know is going to happen.

Unlike most contemporary horror, Hill House doesnâ€™t use non-diegetic sound to build suspense before a jump scare or a ghost sighting. Instead, ghosts appear in the margins of the screen, crawling ever closer. Hill Houseâ€™s long, continuous shots intersperse realistic elements with surreal onesâ€”an incredible shot in the episode â€œTwo Stormsâ€� circles around the family at Nellâ€™s funeral, while a ghost in the background gets nearer and nearer to the cameraâ€”and the actors who play the Crains as children are sometimes switched in for the actors who play them as adults in a kind of nightmare logic, evoking a stronger anxiety about the frights and dangers they donâ€™t know are coming. During an intense argument between Theo and Shirley in â€œWitness Marks,â€� the sudden appearance of a ghost gave me the biggest physical reaction to a horror scene Iâ€™ve ever hadâ€”screams, hiding, and allâ€”because I was completely unprepared for it. Like the resurgence of trauma, nothing prepares the viewer for the horror in Hill House. Itâ€™s so scary because it defies the horror conventions weâ€™ve come to expect. You canâ€™t control trauma, and you canâ€™t always protect yourself from scares.

Hill House is so terrifying that people are allegedly passing out, so thereâ€™s sure to be a second season, which will most likely continue expanding the Hill House universe by introducing more of the ghosts of others that have lived in the house. The last few episodes of the season had a vibe similar to Channel Zero: Butcherâ€™s Block or American Horror Story: Murder House as they set up intrigue about some of the other creatures that inhabit Hill Houseâ€™s dark rooms.

Stevenâ€™s closing monologue about Hill House comes straight from Jacksonâ€”almost. The novel opens and concludes with a similar description of the house, but instead ends with â€œsilence lay steadily against the wood and stone of Hill House, and whatever walked there, walked alone.â€� Jacksonâ€™s Nell is driven to go to Hill House by her desire to belong somewhere. This Nell returns to Hill House because it truly has become her home, the place where all of the Crains experienced their most formative moments, as adults and as children. A central mystery of Hill House is what hides behind the always-locked Red Room door, but no matter whatâ€™s actually there, grief, trauma, and loss are always lurking. Hill House posits that connection with family and loved ones can transcend even that pain; walking together in their shared grief has made Hill House the Crainsâ€™ forever home.

Read this Next: The Feminist Power of Female Ghosts

by Andi Zeisler
The female ghost is an enduringly fascinating figure.