IBM was awarded the most patents in 2018, but overall grants declined by 3.5 percent

We may have passed the peak of the “patent war” in the mobile industry, but the concept of patents as power is far from disappearing, since they continue to be a strong marker for how a company is breaking new ground in technology, and do sometimes help to safeguard an inventor’s or company’s original work — even if the legal enforcement around patents sometimes gets abused.

Patent research firm IFI Claims today published its annual report on how patent grants played out in the tech industry in the past year, and it’s a mixed picture as well. It found that IBM has once again, for the 26th year running, topped the list, with 9,100 patents, followed by Samsung, Canon, Intel and LG — also the same top five as a year ago. Forty-six percent of all applications came from the US, with Asia accounting for 31 percent and the US for 15 percent.

But overall, the number of patents granted in 2018 dropped 3.5 percent over 2017, with many a company in the top 50 showing declines in their grants.

Notable declines included Sony (ranking at 15) down 21 percent; Google (number 11) down 16 percent, and Qualcomm (number 8) down 12 percent. Facebook, which last year made it into the top 50 for the first time, dropped out of the shortlist altogether. On the other hand, companies out of China on average saw overall gains across their patent portfolios.

IFI’s Larry Cady said that it’s not clear why so many companies collectively saw significant declines — whether it was due to a lull in innovation — something that I’d argue might actually be happening in the wider industry — or a new approach to how a company safeguards its intellectual property, or even a more conservative process at the USPTO.

What he does note is that there is an average cycle of two years between pre-grant applications and grants, and these were down in 2016 and 2017, meaning 2020 may also see some declines. (Applications were up in 2018 to 374,763, meaning the numbers will also bounce back for grants.)

Other notable trends: Ford has really been driving up its tech cred with its turn to autonomous vehicle technology, jumping up five spots to become the only car company in the top 10.

Apple also moved back into the top 10 ranking, even as its overall patents declined by three percent.

And IFI notes that if you combined all the subsidiaries of Samsung, it would have actually surpassed IBM this year for overall patents held, or “ultimate patent ownership,” in the words of the IFI.

Samsung Electronics has 61,608 active patent families, with Canon in second position with 34,905 and IBM rounding out the top list with 34,376.

Unlike IFIâ€™s annual Top U.S. Patent Recipients, this broader ranking measures the size of a patent ownerâ€™s global portfolio based on the number of active patent families. A patent family is a set of patent publications filed around the world to cover a single invention. 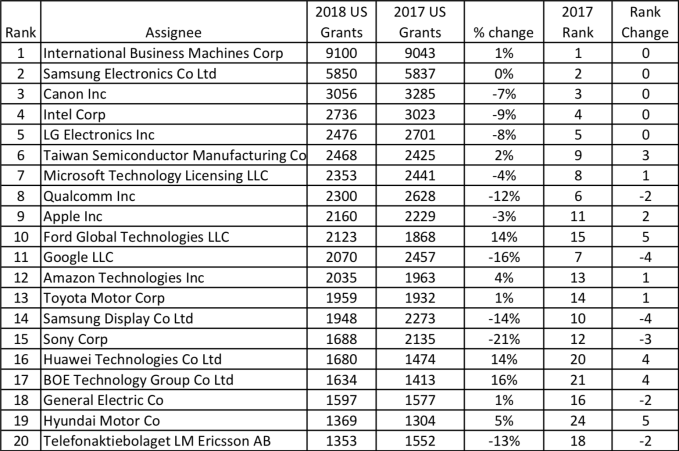