Jeffrey Katzenberg and Meg Whitman today announced a slate of new series and projects heading to their forthcoming video streaming service, Quibi. The list includes an origin story to complement Telemundoâ€™s hit show â€œEl SeÃ±or de los Cielos;â€� a music competition show produced by Justin Bieber manager and entertainment exec Scooter Braun; a show from Jennifer Lopez’s company about the power of giving and paying it forward; as well something called “Frat Boy Genius,” which will focus on the rise of Snapchat — and specifically its creator, Evan Spiegel.

“It is the story of how he built and created Snapchat, which is one of the great social platforms of our time,” touted Katzenberg. “And we want to tell a story that is as compelling and interesting about the creation of Snapchat and Evan’s story as “[The] Social Network” was for Facebook,” he added.

The project will be based on the screenplay by the same name, which had written Spiegel as a hard-partying Stanford student, according to Vulture’s review of the much-hyped script.

“He should be flattered,” remarked Katzenberg, of Quibi’s plans for the Spiegel-focused project.

And now to the featured scripts! First up: @Elissits' FRAT BOY GENIUS, illustrated by @boxbrown. pic.twitter.com/GW8KQclrrB

Katzenberg and Quibi CEO Meg Whitman were at SXSW to speak about the upcoming streaming video service, which plans to offer short-form video designed for mobile. On Quibi, consumers watch â€œqualityâ€� video cut into smaller pieces, including both scripted and unscripted original content, exclusives from Quibiâ€™s partners and other daily news and sports programming.

Already, some of Quibiâ€™s content plans have been announced.

For example, Deadline reported last fall that filmmakers Sam Raimi, Guillermo del Toro and Antoine Fuqua and producer Jason Blum will all create series for the service. And a pitch deck had touted other examples of Quibiâ€™s programming — like a show called â€œInspired Byâ€� with Justin Timberlake and â€œUnder the Gunâ€� with Kobe Bryant. Plus, Katzenberg himself had revealed in a LinkedIn post that Quibi was working on a basketball-related series with Steph Curryâ€™s production company.

However, the story about Snapchat’s founding highlights how Quibi could benefit from its combination of tech and entertainment industry roots, in terms of deciding what to greenlight.

Whitman, a former HP Enterprise president and CEO, also pointed to another example: her penchant for using data to make decisions. 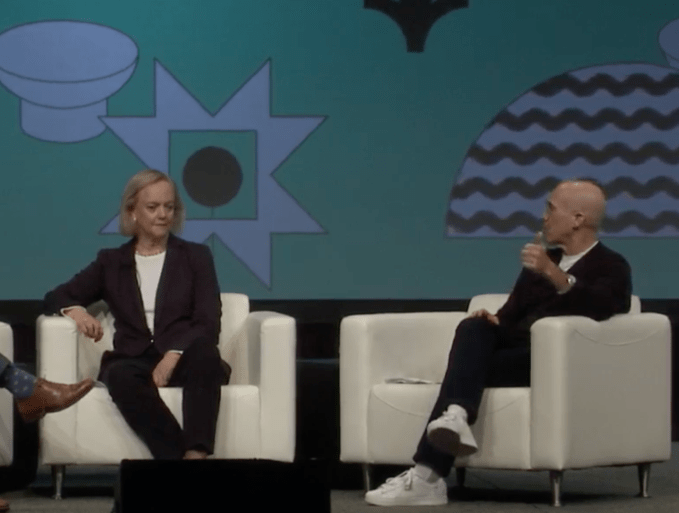 “I am deeply analytical and Jeffrey will argue in stories and allegories,” Whitman said. “And I will say: ‘Jeffrey, do you have any data to suggest that what you have just said is true?’ And he’ll say, ‘no I don’t have any data — but it’s true,’ ” she explained.

“Then I will come with data, facts, total available market size, market segmentation, market research, and he will say, ‘you know, not everything yields to analysis.’ And I’ll say ‘no, not everything does, but most things do,’ ” she said.

For the most part, today’s onstage discussion was a pitch for why Quibi will work and why it needs to exist — with Katzenberg touting its promise as an app that will benefit from 5G mobile networks as well as the cord-cutting behavior among younger millennials, who are no longer interested in traditional pay TV.

Both execs also stressed that Quibi was not a Netflix or YouTube competitor — despite angling for the same share of consumersâ€™ mobile minutes and a set amount of downtime not spent on social media and mobile gaming, for example. They instead believe Quibi will be additive, and other services — like Netflix and Disney+ — can still win, even as Quibi wins.

Katzenberg said that Quibi aims to grab 20 minutes of the 70 minutes per day people spend watching short-form video, but doesn’t believe it will necessarily come at the expense of YouTube or others.

“Six years ago it was six minutes. A year and a half ago, it was 40 minutes. And today it’s 70 minutes,” he said, illustrating mobile video’s rise. “People love being able to watch great short-form content on the go.”

“What we know is that our users are watching a lot of video on mobile. They’re excited about the opportunity to see something differentiated. But honestly, we’reÂ using a lot of judgment, and we’ll know whether it works when it launches,” Whitman added.Â

Quibi will publish more than 100 pieces of content every week, meaning it’s going to be making 5,300-5,400 pieces of content per year, Katzenberg said. He also mentioned a few others examples of programming, including a daily round-up of the best of late night TV, and spoke more vaguely of the potential for a show that delivered music news, the way that MTV’s Kurt Loder once did.

The streaming service is launching in April 2020, Katzenberg also confirmed today, putting a more definitive time stamp on the launch time frame beyond “early 2020” or “spring.”