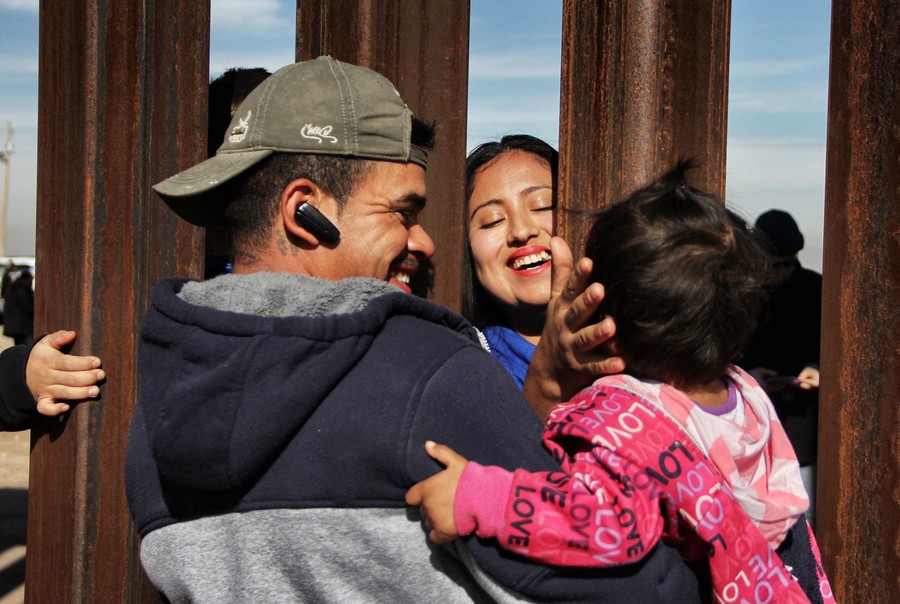 Members of a family reunite through the border wall between Mexico and United States, during the â€˜Keep our dream aliveâ€™ event, in Ciudad Juarez, Chihuahua state, Mexico, on December 10, 2017 (Herika Martinez/AFP/Getty Images)

This summer, when the news was filled with stories about would-be immigrants at the Mexico-U.S. border, coverage was overwhelmingly focused on the experiences of parents and childrenâ€”that is, on the experiences of families. And even though itâ€™s true, as Stephanie Leutert, Director of the Mexico Security Initiative at the Robert S. Strauss Center for International Security and Law, has reported, that families â€œmake up an increasingly high proportion of the migrants who reach the U.S. border,â€� itâ€™s also true that many other kinds of people make that fearsome, often deadly journey. Leutertâ€™s report describes women fleeing from domestic violence, unaccompanied children, and LGBTQ Central Americans escaping death threats.

Some people travel with friends, with lovers, with strangers met along the way, or alone. But journalists, aid organizations, and politicians rarely ask us to sympathize with people not categorized as â€œfamiliesâ€�â€”and that makes me wonder why weâ€™re so much more prepared to care for families than for anyone else. Several years ago, I saw a beautiful poster commemorating Eric Garner, the Black man who was suffocated and killed by a New York City police officer in 2014. Below Garnerâ€™s name and the dates of his birth and death, the poster showed him holding an infant. â€œHe had a family,â€� it read, â€œsix children, three grandchildren.â€� While the poster was clearly made with great love, I wondered why it didnâ€™t say, â€œHe was a horticulturistâ€� or â€œHe was a neighborhood peacemaker,â€� both of which were also true.

Clearly â€œfamilyâ€� is a powerful form of cultural capital, a magic word that opens doors, legitimizes beliefs, and rearranges debates. When conservatives make calls to action in the name of children and familiesâ€”claiming, for example, that Islam is a threat to our children, or that homosexuality harms familiesâ€”it often comes across as insincere, a cover for various hatreds and fears. And yet liberals, Leftists, and Democrats often use similar rhetoric. We may condemn the rightâ€™s phobias, but we donâ€™t pause to consider why those phobias are always disguised as family-protection ordersâ€”and why our own movements, for everything from racial to environmental justice, are, too. Had Garner not been a parent or a grandparent, what would we have said about him? What else could we have said to emphasize that he was kind, that he was worthy, that he was entitled to his lifeâ€”that he was human?

Our focus on the family (coincidentally, the name of one of the most powerful conservative Christian organizations in the world) grows out of the right-wing â€œfamily valuesâ€� campaign that took shape in the early 1990s when then-Vice President Dan Quayle coined the phrase in response to the changes wrought by social and civil-rights movements of the 1960s, â€™70s, and â€™80s. Quayle never meant for â€œfamily valuesâ€� to include immigrants, people of color, single parents, or queer folks; and in many ways the leftâ€™s emphasis on families has been a strategic move to gain both human rights and political footing for vulnerable populations.

We talk about keeping families together rather than protecting people from state violence; we talk more openly about LGBTQ families and marriage than about stigma, difference, and discrimination. We scramble to get everyone counted as families so that they can count. That scramble is nowhere more apparent than in electoral political speech. Bernie Sanders â€œhas fought tirelessly for working familiesâ€� and Elizabeth Warren â€œhas made her lifeâ€™s work the fight for middle-class families,â€� according to their respective campaigns. The Democratic candidates I voted for in todayâ€™s midterm election describe themselves as â€œsurrounded by family and tradition,â€� â€œaâ€¦family man,â€� and committed to â€œhardworking families,â€� and their websites feature photos of the candidates smiling with their spouses and children.

I know some of these folks; I love them, and I love their families. But the ubiquity of such photos and rhetoric suggest something troubling: not only that itâ€™s nice to be in a family, but that only families are nice.

It may be true that the left has been successful in gaining rights for marginalized people via the rhetoric of family, and even in redefining what a family is. To more and more people, a family can be not only â€œtraditional,â€� but also queer, or chosen. Yet more than 20 years after Quayle, the families who still count most are more or less the people he had in mind. We are about to experience the largest generational wealth transfer in U.S. history as Boomers pass on assets to their Millennial children, and it is the middle-class family, as an economic and legal unit, that will be the conduit for this continuation of the status quo.

If familiesâ€”however theyâ€™re definedâ€”remain closed economic, social, and cultural units, can they really be a source of justice? And if we mean to include everyone when we talk about families, why bother with such an inaccurate word?

â€œBecause a healthy society recognizes the need to moderate hubris,â€� notes the solitary queer writer Fenton Johnson, â€œit takes care to protect and listen to its outsiders, who function as a combination of court jesters and advanced scouts [â€¦] for the culture as a whole.â€� At this time of year, when media and pop culture are flooded with images of healthy, comfortable families gathered around laden tables, I want to think about who our outsiders are. They are single people and monks; they are adults without children and children without adults; theyâ€™re friends and lovers, queers and widows, activists and homeless people, caravans and tribes.

â€œFamilyâ€� is a powerful form of cultural capital, a magic word that opens doors, legitimizes beliefs, and rearranges debates.

They deserve justice movements that listen to and protect them on their own terms, without cleaning them up and bringing them into the dining room and calling them â€œfamilies.â€� Iâ€™m not suggesting that we should have a homogeneity of intimacies, but I do want to challenge the ways we use our intimate relationshipsâ€”particularly those to partners, parents, and childrenâ€”as cultural capital. Our intimacies should prepare us to act, love, and be in public, not function as a card we play or a shield we use to protect ourselves from the complexities and risks of political life.

I used the word â€œcaravanâ€� above in part to highlight how responses to the Central American â€œmigrant caravanâ€� thatâ€™s been the subject of Donald Trumpâ€™s midterm fear-mongering differ sharply from last summerâ€™s reactions to â€œimmigrant families.â€� While Democrats decried family separations and Republicans offered vague platitudes about the importance of protecting immigrant families, thereâ€™s no such unity when it comes to the migrant caravan. The rhetorical difference between the two phrases is striking: â€œImmigrant familiesâ€� is a safe way of describing lives whose truths cannot, in the end, be safely reconciled with the status quo. But a â€œmigrant caravan,â€� the image of which Trump has used to reinvigorate his supportersâ€™ xenophobia, is a precarious comet bespeaking revolution.

Itâ€™s worth noting that the word â€œfamilyâ€� comes from the Latin word for servant, famulus; implicit in its definition is the notion of a head and his subordinates. On the other hand, the word â€œcaravanâ€� comes from the Old Persian root kÄ�ra-, for â€œarmyâ€� or â€œthe people,â€� describing a company of travelers on a journey through hostile regions. If we who work for justice are to truly reckon with the traumas and oppressions that interweave our lives, we may have to step out from the household and into the company of travelers