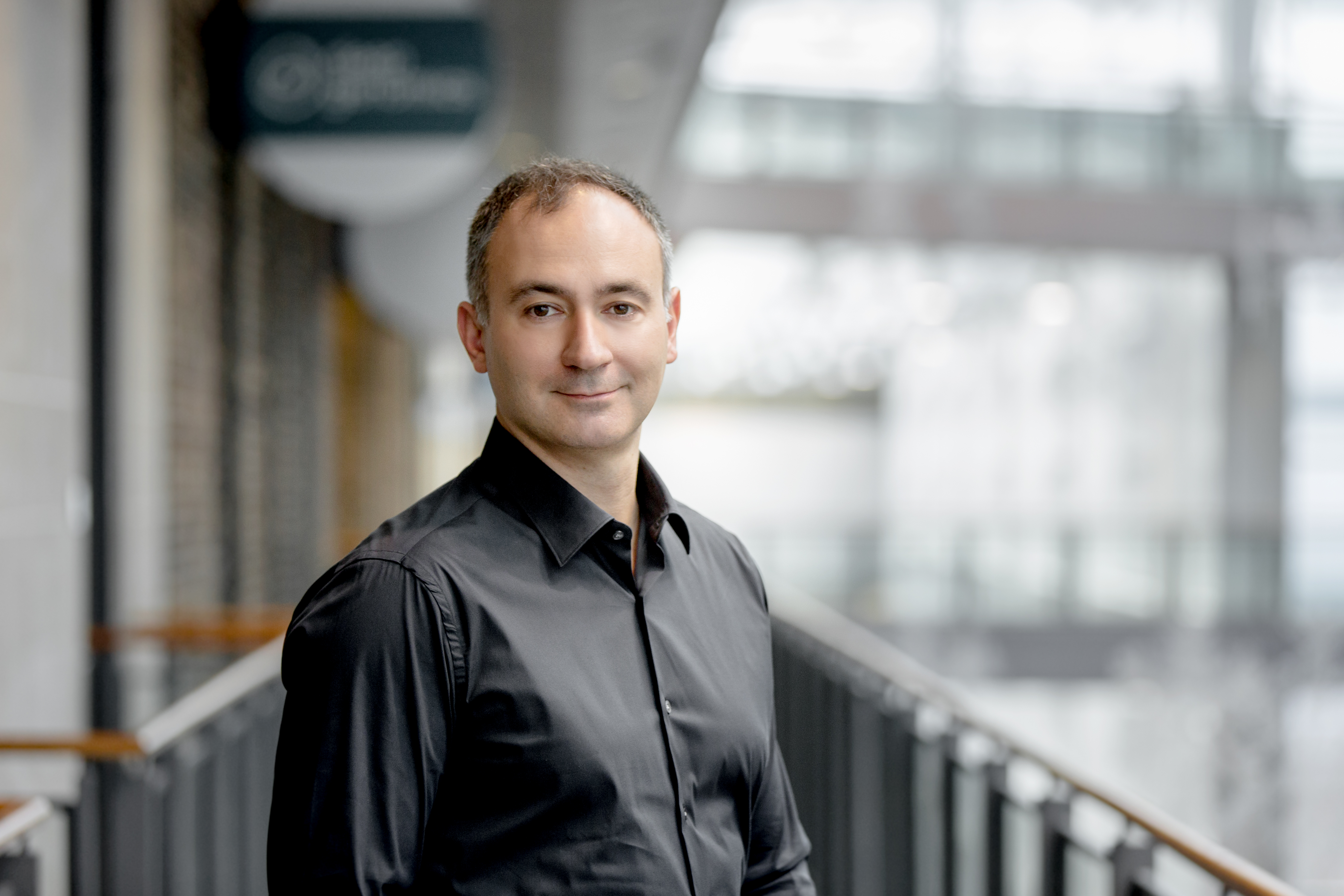 League, an online platform that wants to reduce the strain of managing health benefits for companies and employees alike, announced today that it has raised a $62 million Series B. The round was led by TELUS Ventures, with participation from Wittington Ventures and returning investors OMERS, Infinite Potential Group, RBC Ventures and BDC Ventures.

The Toronto-based startupâ€™s last round of funding was a $25 million Series A two years ago. With clients like Uber, Shopify and Unilever, League is currently one of the bigger players in the â€œemployee wellness space,â€� which encompasses a roster of startups dedicated to boosting retention and productivity rates by improving health benefits. The growth of the sector is fueled by competition for top talent, the rising cost of healthcare and increasing awareness of mental health issues.

League was launched in 2014 by serial entrepreneur Michael Serbinis, who was previously founder and CEO of Kobo, the Kindle competitor acquired by Rakuten in 2011. Serbinis tells TechCrunch that his interest in health technology was sparked by a conversation about healthcare inefficiencies with Patrick Soon-Shiong, the pharmaceutical entrepreneur and NantHealth founder probably better known outside of biotech circles as the newest owner of the Los Angeles Times. Serbinis says Soon-Shiong told him that the healthcare system needed to be fixed by someone outside of the industry, who was able to take a fresh, consumer-driven approach.

â€œI got into it naively not being a healthcare person, with not even a biology class anywhere in my past, and I very quickly realized that most people think about healthcare through the lens of health insurance, i.e. can I do it, can I afford it?â€� Serbinis, League’s CEO,Â says. â€œThe more I learned about it, the more I realized how broken it is. In the U.S. and Canada and Western European nations, healthcare gets more expensive, but you get less and less, and no one loves the experience.â€�

He notes that health benefits â€œare a top three requirement for anyone seeking a new job in the U.S. today and for millennials itâ€™s the top one or two, depending on the survey.” At the same time, healthcare is also one of the top three expenses for companies.

While there is a growing roster of startups,Â including Spring Health, Lyra Health and Lumity, tackling different corporate healthcare issues, Serbinis felt the space was still missing â€œan end-to-end platform that fits on top of health insurance providers and underwriters, to give employers a way to offer a competitive solution in the war for talent and saving money.â€� 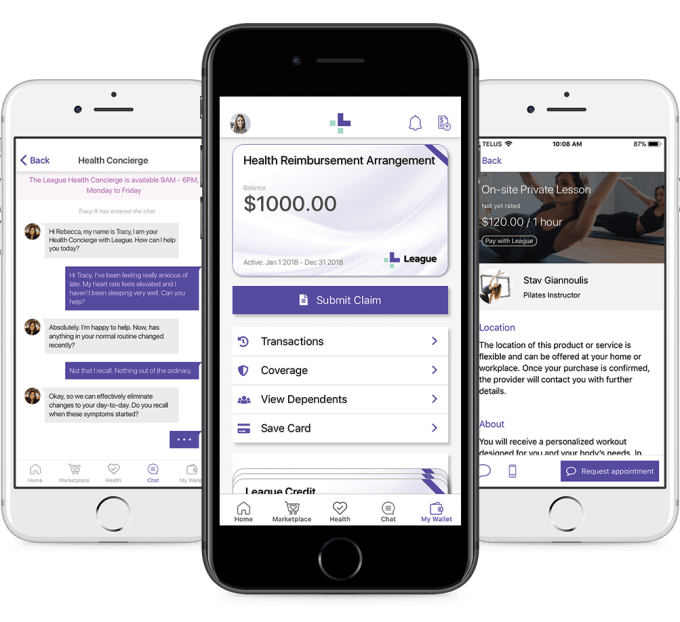 Leagueâ€™s mission is to let employees take more control over their health plans, while reducing costs for companies by providing a HIPAA-compliant platform that connects all benefits. This enables employees to manage their health plan and benefits with Leagueâ€™s chat-based online assistant and a digital wallet. They also gain more transparency into things like health insurance pricing and flexible spending accounts. League partners with other companies to offer perks like ClassPass or Headspace discounts, prescription delivery services or access fertility treatments that arenâ€™t covered by traditional insurance plans.

On the other end, companies get analytics to help them design healthcare plans and see if the benefits they offer are actually improving employee morale.

Serbinis says Leagueâ€™s ease of use is proven by its high engagement rate. The company claims three-quarters of users log onto the platform each month, and of that number, many access it five to 20 times a month.

One interesting aspect of Leagueâ€™s story is that Amazon, Berkshire Hathaway and JP Morgan are currently making headlines for a new joint health care initiative. While the venture will start by overhauling health benefits at those three organizations, it is being closely watched because of its potential influence on the health care industry. Thanks to Kobo, which was once Kindleâ€™s top competitor, Serbinis already has experience going head-to-head with Amazon.

After learning about the triumvirateâ€™s plans, Serbinis says he emailed Bezos. â€œI said I love the initiative and would love to help out, because for the most part, what people expect in the short-term is really aggregate purchasing power and driving costs down there. But ultimately, I expect a lot more from them, and the idea of bringing strategic assets and capability, a big pool of employees and technology together is the right strategy,â€� he says. â€œI can see Amazon looking for a partner like League.â€�

He adds that the joint initiative will light a fire in the sector. â€œI see new entrants into this market accelerate because of Amazon. It really has opened peopleâ€™s eyes to the idea that this is a massive problem,â€� Serbinis says. â€œI see a lot of people getting into the game because of Amazon leading the way, and what Iâ€™ve seen already is incumbent players trying to speed up and accelerate their innovation programs.â€�

The companyâ€™s Series B will be used to open offices in San Francisco, New York and London. League launched in the United States in 2017, starting with an office in Chicago, and is now licensed to operate in all 50 states. Serbinis says one of the markets that will help its American expansion are employers with less than 50 â€œfull-time equivalentâ€� employees who arenâ€™t mandated to provide coverage under the Affordable Care Act, but still need to offer health benefits in order to attract talent. Another new opening is the recent Department of Labor ruling on â€œassociation health plansâ€� that makes it easier for small businesses in the same sector to team up and buy employee health insurance together.

League also plans to begin operating in the United Kingdom and European Union next year, which will make it easier to attract multinational clients who want to use the same platform to manage health benefits in different countries.

â€œWhen you think about the future of health insurance, itâ€™s easy to think about more of the same, but with a better website or app,â€� says Serbinis. â€œBut the fact is that the future of health insurance is not just about insurance, but health and there is the idea of focusing on consumers and delivering personalized experiences, a digital experience that is data driven and helps them every day, instead of waiting to the point where they are sick and have to go to a website under duress to find out what to do.â€�