LG Mobile’s losses continue but now sales are falling too

Korean electronics giant LG is soaring to new heights, but its mobile division continues to lag well behind the rest of the company and the signs aren’t promising.

LG’s latest financials released today recorded another quarter of success with operating profit jumping 16 percent year-on-year to hitÂ KRW 771 billion ($715.1 million) as overall sales rose 3.2 percent across the group. LG said its sales and profit for the first half of 2018 are at all-time highs but — and you knew a but was coming… — its smartphone division remains a significant loss-maker.

The company’s mobile and communications division — which houses LG Mobile — posted yet another quarter in the red. Sales of KRW 2.07 trillion ($1.92 billion) represented an annual drop of 23 percent, while the division carded an operating loss of KRW 185.4 billion, or $171.95 million.

There’s nothing new here,Â losses are commonplace for LG Mobile.

It hasn’t been break-even or profitable since 2014. Those losses have been cut by some degree since the company shook up the division with new leadership in November 2017, but there’s plenty to worry about with sales dipping noticeably over the past two quarters of business. 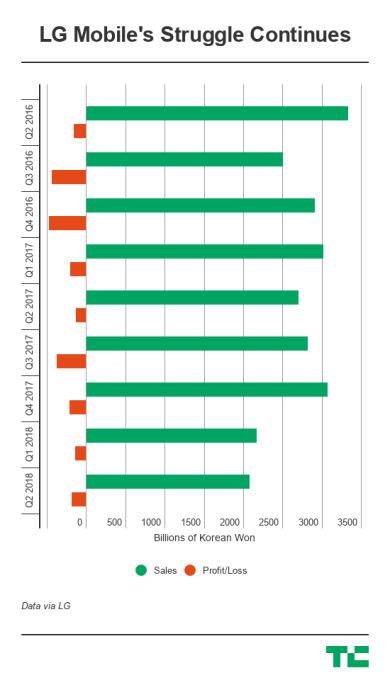 This time around in Q2, LG put its mobile losses down to “the slowing growth of the global smartphone market and a decline in mid- to low-end smartphone sales in Latin America.” While it claimed that the size of the operating loss was down to investments in sales and marketing ahead of the release of its next flagship devices.

There’s a hint a reorganization — perhaps even layoffs — as the company addedÂ that it wouldÂ “seek to further improve its business structure” as it aims preparesÂ to push itsÂ LG G7 ThinQ and LG V35 ThinQ devices worldwide and get ready for those new launches.

More changes are on their way, you’d imagine, as LG is surely looking for a way to stem the bleeding but also retain a mobile business has certainly been iconic despite its struggles in recent times. Perhaps the answer is a downsizing in a similar style to Sony in 2016. Back then, the Japanese firm was losing even more than LG is per quarter but it began to be more strategic with its new device launches and target sales markets. The end result of that strategy was an end to the big losses and a more sustainable mobile business.