A win for privacy on LinkedIn could be a big loss for businesses, recruiters and anyone else expecting to be able to export the email addresses of their connections. LinkedIn just quietly introduced a new privacy setting that defaults to blocking other users from exporting your email address. That could prevent some spam, and protect users who didn’t realize anyone who they’re connected toÂ could download their email address into a giant spreadsheet. But the launch of this new setting without warning or even a formal announcement could piss off users who’d invested tons of time into the professional networking site in hopes of contacting their connections outside of it. 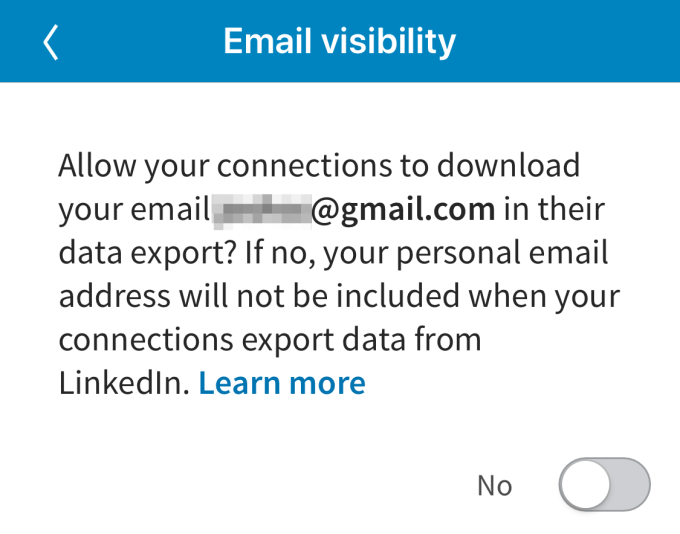 TechCrunch was tipped off by a reader that emails were no longer coming through as part of LinkedIn’s Archive tool for exporting your data. Now LinkedIn confirms to TechCrunch that “This is a new setting that gives our members even more control of their email address on LinkedIn. If you take a look at the setting titled ‘Who can download your email’, you’ll see we’ve added a more detailed setting that defaults to the strongest privacy option. Members can choose to change that setting based on their preference. This gives our members control over who can download their email address via a data export.”

That new option can be found under Settings & Privacy -> Privacy -> Who Can See My Email Address? This “Allow your connections to download your email [address of user]Â in their data export?” toggle defaults to “No.” Most users don’t know it exists because LinkedIn didn’t announce it; there’s merely been a folded up section added to the Help centerÂ on email visibility, and few might voluntarily change it to “Yes” as there’s no explanation of why you’d want to. That means nearly no one’s email addresses will appear in LinkedIn Archive exports any more. Your connections will still be able to see your email address if they navigate to your profile, but they can’t grab those from their whole graph.

Facebook shouldn’t block you from finding friends on competitors

Facebook came to the same conclusion about restricting email exportsÂ back when it was in a data portability fight with Google in 2010. Facebook had been encouraging users to import their Gmail contacts, but refused to let users export their Friends’ email addresses. It argued that users own their own email addresses, but not those of their Friends, so they couldn’t be downloaded — though that stance conveniently prevented any other app from bootstrapping a competing social graph by importing your Facebook friend list in any usable way. I’ve argued that Facebook needs to make friend lists interoperable to give users choice about what apps they use, both because it’s the right thing to do but also because it could deter regulation.

On a social network like Facebook, barring email exports makes more sense. But on LinkedIn’s professional network, where people are purposefully connecting with those they don’t know, and where exporting has always been allowed, making the change silently seems surreptitious. Perhaps LinkedIn didn’t want to bring attention to the fact it was allowing your email address to be slurped up by anyone you’re connected with, given the current media climate of intense scrutiny regarding privacy in social tech. But trying to hide a change that’s massively impactful to businesses that rely on LinkedIn could erode the trust of its core users.