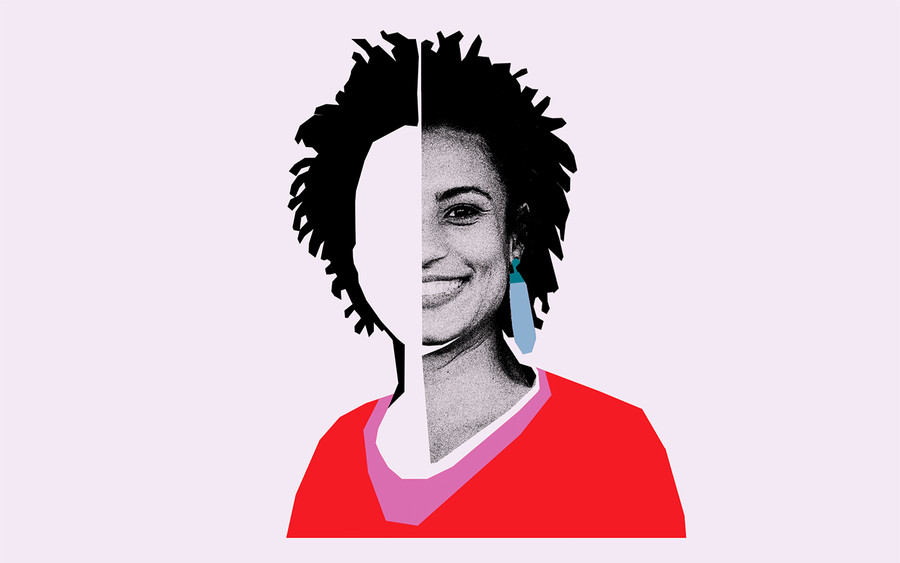 On March 14, 2018, Afro-Brazilian councilwoman Marielle Franco was assassinated in Rio de Janeiro as she left an event during which she had discussed the challenges and joys of being a Black woman politician. Thirty-eight-year-old Franco, a member of the Socialism and Liberty Party (PSOL), was elected into office with 46,000 votes in 2016. Her work in office focused on developing policies that would improve the lives of women, advocating for lgbtq rights, and demanding justice in cases of police brutality against Afro-Brazilian people. She consistently opposed the militarization of law enforcement and was on the council that performed oversight of a presidentially decreed military intervention in Rio de Janeiro. While driving away from the political event, Franco and her driver Anderson Pedro Gomes were executed in cold blood. Franco received four fatal shots to the head.
Francoâ€™s murder was first reported by police as an attempted robbery, though nothing was taken from her car; many Brazilians suspected immediately that she was assassinated because of her positionality as a bisexual Black woman in post-coup Brazil; her constant demands for accountability in a corrupt police force; and a political focus on opening doors to Black working-class women. The political pressure from the hashtag #NÃ£oFoiAssalto (â€œIt Wasnâ€™t a Muggingâ€�) forced media and authorities to admit that she was executed. Months later, no one has been charged, and the investigation into Franco and Pedro Gomes’s murder is still ongoing.
The mourning cry of the Brazilian left at the loss of one of its fiercest and most radical voices was heard across the world. On social media, activists began using #MarielleFrancoPresente, which can be translated to â€œMarielle Franco is Here,â€� to raise awareness about the murder. The word â€œpresente,â€� the standard Brazilian student response to a classroom roll call, has previously been used by Brazilian activists to remember victims of violence and to combat the Latin American practice of political assassinations. Using â€œpresenteâ€� for political purposes can be traced back to the Mothers of the Plaza de Mayo in Argentina, who started using the word in the â€™70s to memorialize the missing children taken by a military junta during the countryâ€™s dictatorship. Adding â€œpresenteâ€� to Francoâ€™s name is a proclamation: Though she was brutally murdered for her politics, we refuse to let the racialized misogynist violence that took her body also take her memory and legacy.

The practice of remembering Franco through roll call was done at vigils as well as online, shining a light on who she was and what she stood for while simultaneously combating the fake news produced by right-wing trolls who spread a photoshopped photo of Franco with a gang leader, implying that she died because of her involvement with organized crime. Caetano Veloso, Gilberto Gil, Elza Soares, and even Viola Davis posted homages to Franco online. A viral video made by YouTuber and actress Ana de Cesaro remixed a poem about Franco into a haunting tribute played alongside the sounds of a storm over Rio de Janeiro: â€œAnother assassinated woman, not just a woman, a Black woman…Marielle moved structures …stop killing us, this is urgent. Marielle, presente .â€� The echoing voices of the poem mirrored the fast-paced mourning-to-outrage-to-resistance many Brazilians experienced. In response to the assassination and the subsequent defamation of Francoâ€™s character, Black academic Allyne Andrade wrote for the website CartaCapital: â€œWe need to preserve the legacy of Marielleâ€¦. Part of combating racism is also not allowing them to rip away our memories of ourselves.â€�

Keeping Francoâ€™s memory alive was also integral to the protests that ensued the week after her murder. Vigils were held in London, Lisbon, Paris, Buenos Aires, Santiago, Montevideo, Barcelona, and many other cities. In Brazil, activists from the Socialism and Liberty Party, the Brazilian feminist movement, and the Black civil rights movement flooded the streets to demand justice. Banners and signs expressed mourning and continued resistance: â€œThey wonâ€™t shut us upâ€�; â€œI, a Black woman, resist!â€�; â€œWho killed Marielle?â€�; â€œMarielleâ€™s voice wonâ€™t be silencedâ€�; and â€œThey tried to bury us.â€�

Across the world, left-leaning politicians mobilized to honor Franco: Representatives from the European Parliament demanded justice, and the Euro-Latin American Parliamentary Assembly issued a condemnation of the assassination. Politicians took photos with signs that read, â€œMarielle is here, today and always.â€� Posters raising awareness about both the assassination and Francoâ€™s legacy have been popping up across the world. The importance of keeping Francoâ€™s intersectional approach to state violence echoing through Brazil via both embodied and virtual resistance was and still is palpable.

Making Francoâ€™s queerness visible is also key to keeping her legacy alive; Franco often spoke about violence against lesbian women in Brazil and worked with Rio de Janeiroâ€™s Lesbian Front to propose Lesbian Visibility Day, though the city council struck down that idea.

In an open letter, Monica Tereza Benicio, Francoâ€™s partner of 12 years, wrote in Vanity Fair, â€œCould two women, born in the favelas, live together? There were many reasons to stay away and only one pushed us forward: love. We could not live separated from each other.â€�

We can certainly question whether Franco was appreciated enough while she was alive, but her executionâ€”blatantly linked to her Black feminist positions in a time when activists are openly being pushed out of the public eye by Brazilâ€™s right-wing governmentâ€”has strengthened a political movement to demand change in the country. Leftist parties in Rio have agreed to drop out of the upcoming state gubernatorial election to make way for Francoâ€™s party, PSOL, signifying a unity within the left. Grassroots antiracism and feminist movements consisting of Black women, queer people, and working-class people are encouraging women to run for office, and are continuing Francoâ€™s practice of demanding accountability for violence by asking every day: Who killed Marielle and Pedro?

Francoâ€™s political career began, as it ended, with a tragedy: She first decided to run for office after a friend was killed in a shoot-out in her Complexo da MarÃ© community. Francoâ€™s assassination and the Black genocide perpetrated by the state have reinvigorated many who had lost hope in the fight. As Rio de Janeiro state representative Marcelo Freixoâ€”a party colleague and lifelong friend of Francoâ€™sâ€”said, â€œWhoever killed Marielle thinking it would silence anyone made the biggest mistake of their lives. Marielle never inspired silence. Marielle makes noise. Marielle always made noise. A new Marielle will be born on every street corner.â€� Indeed, Francoâ€™s assassination has strengthened resolve to fight against fascism in Brazilâ€”so saying her name, spreading her message across the world, and continuing to demand justice for her murder will haunt the people in power until they answer for their crimes.

Nicole Froio is a feminist writer and researcher currently based in York, UK. She writes on the subjects of masculinity, violence, whiteness, feminism and social issues in Brazil, where she is originally from.