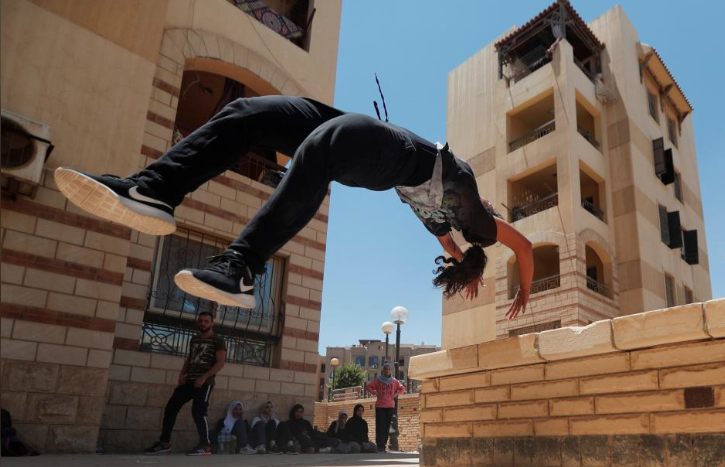 Somersaults, high-jumps and kicks against the wall, their thin veils and curls trail behind the speedy moves. A group of young Egyptian women have dove into the decision to pursue a male-dominated sport, parkour, despite all societal pressures.

The young women harbor the hope to become the first female group to join Parkour Egypt.

Introduced to Egypt in 2003, parkour is a popular and global practice that aims to pass obstacles using the minimum about of time and effort. It relies on using the city scape and infrastructure as a form of ‘playground’.

Not long before its appearance, Egyptians had mixed reactions to the sport. Some did not consider it a sport and perceived it as a group of people who are playing around; others were concerned about the destruction of public property.

Young women, in particular, were intrigued by the sport and thought it was a great way to overcome their fears and figurative obstacles.

However, it was not easy for them to join the practice. Those monitoring the news of the girls’ participation questioned how the girls were okay with having a male coach and practice amongst men.

“They [girls] would always face rejection from the people and society,” Mostafa Hussein, coach at Parkour Egypt, explained. “People were confused as to how they [girls] can train with boys and how can a girl play with a boy in the street or how they can practice dangerous moves,” he added.

Some of the girls’ parents were not on board with allowing their daughters to practice a dangerous, male-oriented sport.

“My parents shunned the idea in the beginning. They thought it was a dangerous sport and not for girls. Itâ€™s more a boys sport,” traceuse, Rahma Ahmed, revealed,”but by time when they saw that I can moves and my level is like that of the boys, they liked the idea and started accepting it.”

Others would allow them to attend indoor practice sessions, but prevent them from practicing outdoors because “people would be around,” Fatma Youssry, traceuse, admitted.

Nonetheless, the young girls persisted to pursue the sport regardless of their social confinement. They want to become the first women to join Parkour Egypt team and hope to inspire other women to break societal boundaries too.