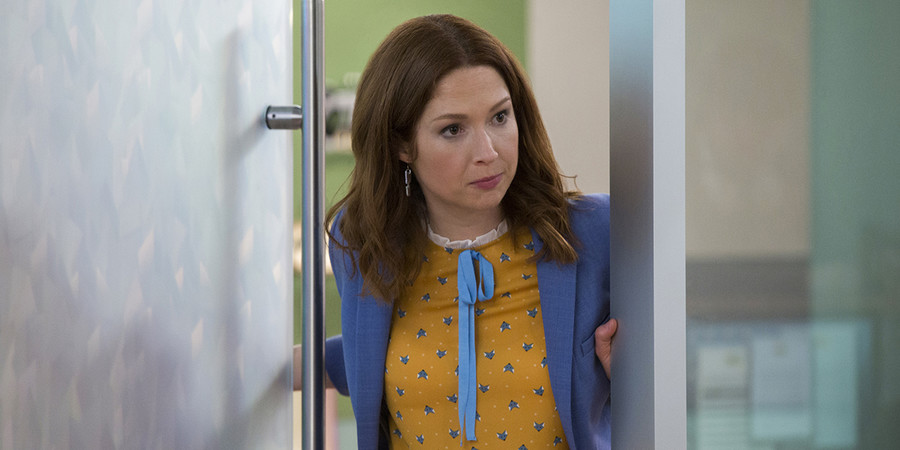 Unbreakable Kimmy Schmidt returned to Netflix last Friday with the release of its final episodes. Unlike previous seasons, Season 4 was broken into two parts, with the first half premiering in May of 2018. After watching the season in its entirety, the split seems more or less arbitrary, but the decision was likely made for logistical reasons, rather than creative ones. Regardless, as a fan of 30 Rock and Tina Feyâ€™s comedy in general, I was excited to see Ellie Kemper, Tituss Burgess, Jane Krakowski, and Carol Kane return to my TV screen. In terms of its comedic timing, joke-per-minute ratio, and emotional resolution, the final season delivers. Its political and social commentary, however, is trickierâ€”Kimmy Schmidt has always approached these with a kind of meta-absurdism, but now seems to be struggling to decide what it wants to say.

The first of the final six episodes opens with Titus Andromedon (Burgess) sipping coffee from a Styrofoam cup at his â€œcoffee placeâ€�â€”a carwash he frequents daily to steal their complimentary brew. Titus recently snagged a part playing â€œDoorman #6â€� in an unaired episode of Daredevil and, using standard Titus logic, assumes that Ilan, the cute guy eyeing him at the carwash (winkingly played by Jon Bernthal, aka Daredevilâ€™s fellow vigilante The Punisher), must recognize him from his one-line appearance. Blinded by delusions of his own grandeur, Titus spends the rest of the episode convinced that Ilan is only interested in him because of his newfound fame. In a moment of frustration, Ilan reveals that he was hired as a private investigator to dig up dirt on Titus by a client who fears legal retaliation from various men he attempted to coerce into sex. As a follow-up to a sexual harassment arc from the first half of the season, this revelation lays the groundwork for a #MeToo-centered storyline in the following episode.

Though Kimmy Schmidt has tackled difficult subjects like trauma, teen pregnancy, and abortion with sincerity and its signature off-kilter humor, it has struggled with striking the right tone when depicting workplace sexual harassment. In the Season 4 premiere, for instance, Kimmy inadvertently committed sexual harassment against a coworker sheâ€™d been instructed to fire: Unprepared to do her bossâ€™s dirty work, she calls him into her office, and rattles off a series of unintentional sexual innuendos. For example, Kimmy says, â€œItâ€™s not gonna suck itself,â€� as the camera pans to a smoothie that says, â€œGood luck, Kabir!â€� The scene culminates in Kimmy dropping her pants as an attempt to help Kabir feel less embarrassed about his termination. Because Kimmyâ€™s guileless, childlike innocence is an ongoing source of humor within the show, itâ€™s clear that the interaction is a genuine misunderstanding, and while Kimmy acknowledges her mistake with Titusâ€™ help, itâ€™s mostly played for laughs.

Similarly, Kimmy Schmidtâ€™s handling of Titusâ€™ #MeToo storyline feels clumsy. In the same episode that Kimmy harassed Kabir, Titus revealed that he was sexually harassed during a job interview for Sesame Street. Mid-interview, a puppet named Mr. Frumpus requests sexual favors in exchange for a role on the show. In the recently released episodes, the series explores this encounter even further. As Titus walks out of the interview, Mr. Frumpus and his puppeteer follow him into an elevator. Frumpus makes an elevator joke, asking if Titus is â€œgoing down,â€� and then immediately drops his pants. In what is perhaps the most disturbing scene in the entire series, the audience is given a close up of Mr. Frumpusâ€™s fuzzy, orange Muppet dickâ€”an image that is forever seared into my brain.

While these scenes make for easy laughsâ€”they are genuinely funny momentsâ€”they left me unsure of what the series was actually trying to say. As in previous seasons, Kimmy Schmidt doesnâ€™t shy away from heavy subject matter; one of the showâ€™s consistent strengths throughout its run has been its ability to find humor in even the darkest places. That said, in the final episodes, this feels like a double-edged sword. The #MeToo jokes may not punch down, but they also donâ€™t necessarily punch up. If anything, Unbreakable Kimmy Schmidt decidedly punches sideways.

Kimmy Schmidt may not have all the answers, but, in all fairness, itâ€™s never claimed to. The show handles heavy topics like emotional abuse, PTSD, and workplace harassment in the same flippant, irreverent way weâ€™ve come to expect from Tina Feyâ€™s comedies, and I donâ€™t think thatâ€™s necessarily a bad thing. Kimmy Schmidt doesnâ€™t shy away from the fact that the world its characters occupy is a dark oneâ€”much like our own. As a viewer, I donâ€™t look to the series to provide profound political commentary, and I doubt that most of its fans do either. Despite the showâ€™s missteps, Fey has crafted a remarkable, absurdist world filled with loveable characters, endless wit, and, most of all, optimism in the face of darkness. When I need a break from heavy-handed dramas like The Handmaidâ€™s Tale or even the evening news, Unbreakable Kimmy Schmidt provides a much-needed laugh.

Marina Watanabe is Bitch’s social media editor. She hosts a web series called Feminist Fridays and has been told that she’s an â€œastrological nightmare.â€� You can find her on Twitter most days.

Snapchat reportedly toys with the idea of making its snaps permanent Beware: Shortcuts could steal your data