Mobile social network Path, once a challenger to Facebook, is closing down

It’s that time again, folks, time to say goodbye to a social media service from days past.

Following the shuttering of Klout earlier this year, now Path, the one-time rival to Facebook, is closing its doors, according to an announcement made today. (Yes, you may be surprised to learn that Path was still alive.)

The eight-year-old service will close down in one month — October 18 — but it will be removed from the App Store and Google Play on October 1. Any remaining users have until October 18 to download a copy of their data, which can be doneÂ here.

It is with deep regret to announce that Path service will be discontinued. It has been a long journey and we sincerely thank each one of you for your years of love and support Path.
Please visit here https://t.co/2MFh5A7C23 for more details. pic.twitter.com/rczKgx6ooW

Path was founded by former Facebook product managerÂ Dave Morin, and ex-Napster duo Dustin Mierau and Shawn Fanning . The company burst onto the scene in 2010 with a mobile social networking app that was visually pleasing and — importantly — limited to just 50 friends per user. That positioned itÂ as a more private alternative to Facebook with some additional design bells and whistles, although the friend restriction was later lifted and then removed altogether.

At its peak, the service had around 15 million users and it was once raising money at a valuation of $500 million.Â Indeed, Google tried to buy it for $100 million when it was just months old. All in all, the startup raised $55 million from investors that included top Silicon Valley names like Index, Kleiner Perkins and Redpoint. 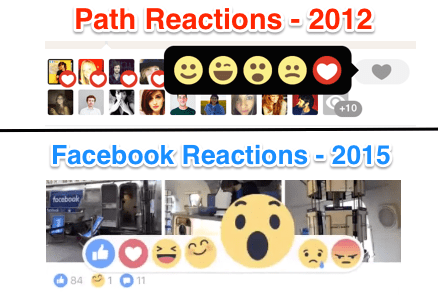 Facebook ultimately defeated Path, but it stole a number of features from its smaller rival

But looks fade, and social media is a tough place when you’re not Facebook, which today has over 1.5 billion active users and aggressively ‘borrowed’ elements from Path’s design back in the day.

Path’s road took a turn for the worse and the much-hyped startup lost staff, users and momentum (and user data). The company tried to launch a separate app to connected businesses and users — Path Talk — but that didn’t work and ultimately it wasÂ sold to Korea’s Kakao — a messaging and internet giant — in an undisclosed deal in 2015. Kakao bought the app because it was popular in Indonesia, the world’s fourth-largest population where Path had four million users, and the Korean firm was making a major play for that market, which is Southeast Asia’s largest economy and a growing market for internet users.

However, Path hasn’t kicked on in the last three years and now Kakao is discarding it altogether.

“It is with deep regret that we announce that we will stop providing our beloved service, Path.Â We started Path in 2010 as a small team of passionate and experienced designers and engineers.Â Over the years we have tried to lay out our mission: through technology and design we aim to be a source of happiness, meaning, and connection to our users,” the company said in a statement.