After 10 months flying in space, NASA’s Double Asteroid Redirection Test (DART) spacecraft crashed into the 160-m-wide asteroid moonlet Dimorphos — which orbits a larger, 780-m-wide asteroid Didymos — on September 26, 2022, at 7: 14 p.m. EDT (23: 14 UTC). As a part of NASA’s overall planetary defense strategy, DART’s impact demonstrates a viable mitigation technique for protecting the planet from an Earth-bound asteroid or comet, if one were discovered. 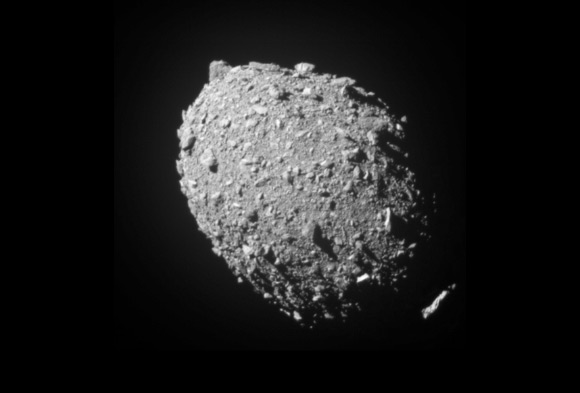 The asteroid moonlet Dimorphos as seen by NASA’s DART spacecraft 11 seconds before impact. DART’s on board DRACO imager captured this image from a distance of 68 km (42 miles). This image was the last to contain all of Dimorphos in the field of view. Image credit: NASA / Hopkins Applied Physics Laboratory.

“At its core, DART represents an unprecedented success for planetary defense, but it is also a mission of unity with a real benefit for all humanity,” said NASA Administrator Bill Nelson.

“As NASA studies the cosmos and our home planet, we’re also working to protect that home, and this international collaboration turned science fiction into science fact, demonstrating one way to protect Earth.”

“Now we know we can aim a spacecraft with the precision needed to impact even a small body in space.”

“Just a small change in its speed is all we need to make a significant difference in the path an asteroid travels.”

DART’s Didymos Reconnaissance and Asteroid Camera for Optical navigation (DRACO), together with a sophisticated guidance, navigation and control system that works in tandem with Small-body Maneuvering Autonomous Real Time Navigation (SMART Nav) algorithms, enabled the probe to identify and distinguish between the two asteroid bodies, targeting the smaller Dimorphos.

These systems guided the 570-kg box-shaped spacecraft through the final 90,000 km (56,000 miles) of space into Dimorphos, intentionally crashing into it at roughly 22,530 km per hour (14,000 mph) to slightly slow the asteroid’s orbital speed.

DRACO’s final images, obtained by the spacecraft seconds before impact, revealed the surface of Dimorphos in close-up detail.

The DART team will now observe Dimorphos using ground-based telescopes to confirm that the impact altered the moonlet’s orbit around Didymos.

The researchers expect the impact to shorten Dimorphos’ orbit by about 1%, or roughly 10 minutes; precisely measuring how much the asteroid was deflected is one of the primary purposes of the full-scale test.

“This is uncharted territory, we’ve never been to a binary asteroid before,” said Dr. Paul Abell, chief scientist for small body exploration and astromaterials research and exploration science at NASA’s Johnson Space Center.

“We know a little bit about the bigger one (Didymos), because it’s big enough that we can determine its size and shape and other physical properties from the ground.”

“We do have some indications of how big the little one (Dimorphos) is, but in terms of shape and everything else, we don’t have much information.”

“In a real planetary defence situation, you don’t get to pick the asteroid — the asteroid picks you! In this case, we don’t know much about the target, but that’s why we’re doing it. It’s an easy one to see and study because it’s going to be very close to Earth at the moment of impact, but also one that is safe to test.”

“DART is a culmination of a lot of work for which many people have devoted several years of their lives. For me, personally, I have been working on this mission for a long time — more than 10 years — from concept and then actually the mission itself, trying to get all this together. I’m really, really excited about Monday. I’ve got goosebumps.” 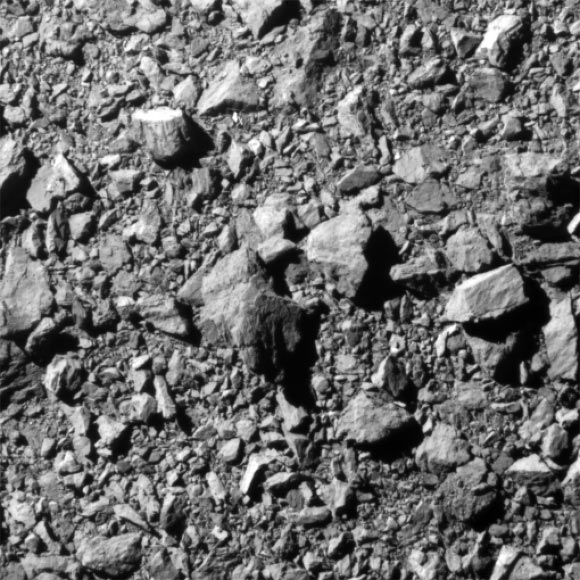 The last complete image of asteroid moonlet Dimorphos, taken by the DRACO imager on NASA’s DART mission from 12 km (7 miles) from the asteroid and 2 seconds before impact. The image shows a patch of the asteroid that is 31 m (100 feet) across. Image credit: NASA / Hopkins Applied Physics Laboratory.

Fifteen days before impact, DART’s CubeSat companion Light Italian CubeSat for Imaging of Asteroids (LICIACube) deployed from the spacecraft to capture images of DART’s impact and of the asteroid’s resulting cloud of ejected matter.

In tandem with the DRACO images, LICIACube’s images are intended to provide a view of the collision’s effects to help researchers better characterize the effectiveness of kinetic impact in deflecting an asteroid.

Because LICIACube doesn’t carry a large antenna, images will be downlinked to Earth one by one in the coming weeks.

“DART’s success provides a significant addition to the essential toolbox we must have to protect Earth from a devastating impact by an asteroid,” said Lindley Johnson, NASA’s Planetary Defense Officer.

“This demonstrates we are no longer powerless to prevent this type of natural disaster. Coupled with enhanced capabilities to accelerate finding the remaining hazardous asteroid population by our next Planetary Defense mission, the Near-Earth Object (NEO) Surveyor, a DART successor could provide what we need to save the day.”

“Beyond the truly exciting success of the technology demonstration, capabilities based on DART could one day be used to change the course of an asteroid to protect our planet and preserve life on Earth as we know it.”

“Roughly four years from now, ESA’s Hera project will conduct detailed surveys of both Dimorphos and Didymos, with a particular focus on the crater left by DART’s collision and a precise measurement of Dimorphos’ mass.”

“Incredibly, DART has managed to successfully travel 11 million km (6.8 million miles) to crash into the tiny moonlet Dimorphos, just 160 m across, and mark the milestone of the first full-scale planetary defence mission,” said Dr. Vanessa Moss, an astronomer at CSIRO.

“This is the first step towards truly defending Earth from the threat of near earth objects, by improving our space situational awareness and proving we can divert objects if needed.”

“It’s great to see the continued collaboration between CSIRO and NASA via the Deep Space Network and the operations of the Canberra Deep Space Communication Complex (CDSCC). In fact, CDSCC was the primary station responsible for capturing the final images of DART as it hurtled towards the surface of Dimorphos.”

“Future missions such as ESA’s Hera and NASA’s Near Earth Object Surveyor will continue to push the frontiers of our ability to protect our precious home planet and pave the way towards an effective planetary defence system.”

“And what a beautiful little asteroid it is.It’s appearance suggests that it may be similar to other asteroids that have been visited in recent years, a loose rubble pile of house-sized boulders and car-sized and smaller rocks bound together by gravity. There’s just so much science still to be discovered from today’s event.”

“Incredibly proud of our CSIRO team in the control room today. Just like DART, they were laser focussed on the task at hand and maintained communications lock right throughout these final hours. I couldn’t be more proud of what they have achieved today. Along with the DART mission scientists, they made history!”

Shareholders Versus Stakeholders: Why They Should Be in Accord To Be Successful Wednesday’s Sports In Brief