Even the most successful tech company is going to have a stumble from time to time. Nintendoâ€™s 45 years in the video game industry is spotted with a few doozies, but none are more infamous than the Virtual Boy. The 1994 portable console was marketed as an early home entry into virtual reality, but in actual reality ended up being little more than a blood-red headache.

Nintendo knew the comparisons to the doomed console would come fast and furiously when it launched its next VR venture, so the company took the time to get it just right. In a sense, Labo VR is a cautious push into the virtual realm. Itâ€™s nowhere near the all-in approach of Oculus, Vive or even PlayStation VR, for that matter — but itâ€™s uniquely Nintendo.

Like the first Labo kits, itâ€™s a friendly reminder that Nintendoâ€™s chief job is to surprise and delight, and it happily delivers on both fronts. But just as the Labo piano shouldnâ€™t be mistaken for a real musical instrument, Labo VR ought not be viewed as a real virtual reality. 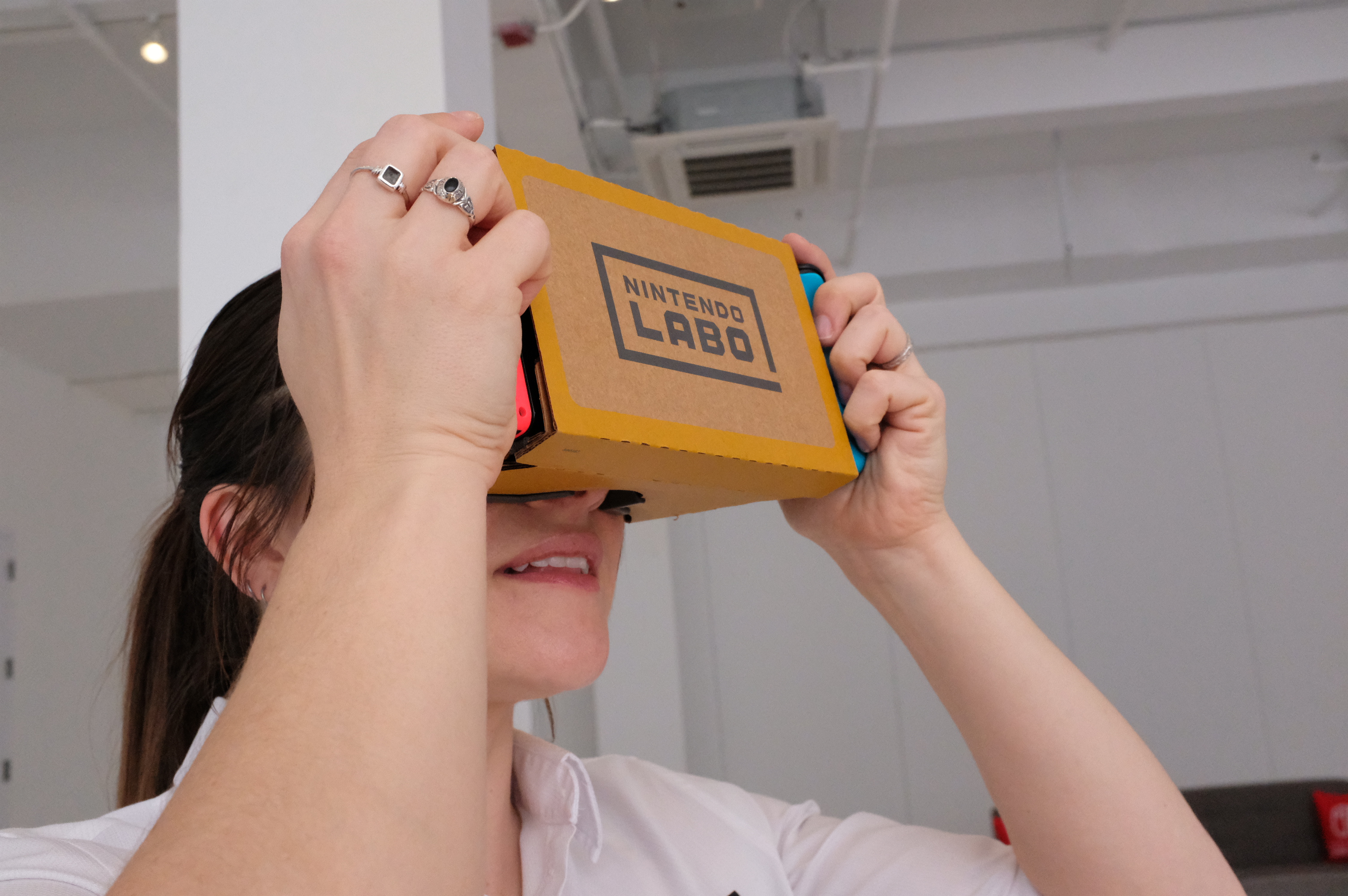 Itâ€™s not just the pop-out cardboard form factor, either. Google made that a perfectly acceptable beginnerâ€™s approach to VR. Itâ€™s more that Nintendo has taken a very casual approach to all of this. The kitâ€™s virtual reality experience is an extension of Labo itself. Itâ€™s no more important than the process of building the headset and various accessories step by step on the app. Or, for that matter, sharing all of the above experiences with others.

During a demo of the new kits in New York this week, Nintendo was quick to point out that the headsets are built without a strap. It claims this was a conscious decision so that the experience can be passed around and shared. Iâ€™m sure there are some practical reasons behind this decision as well, but itâ€™s certainly a nice thought.

Virtual reality is, by nature of its form factor, a solitary experience. Labo VR doesnâ€™t have any sort of video-out feature to share the experience on a big screen (for now, at least), so the idea of offering it up in a more social play-and-pass scenario is appealing. This goes double for the fact that, like the original Labo kits, all of the games included fall under the casual banner. The experiences share a common lineage with Nintendo analog titles like Mario Party or Mario Paint. 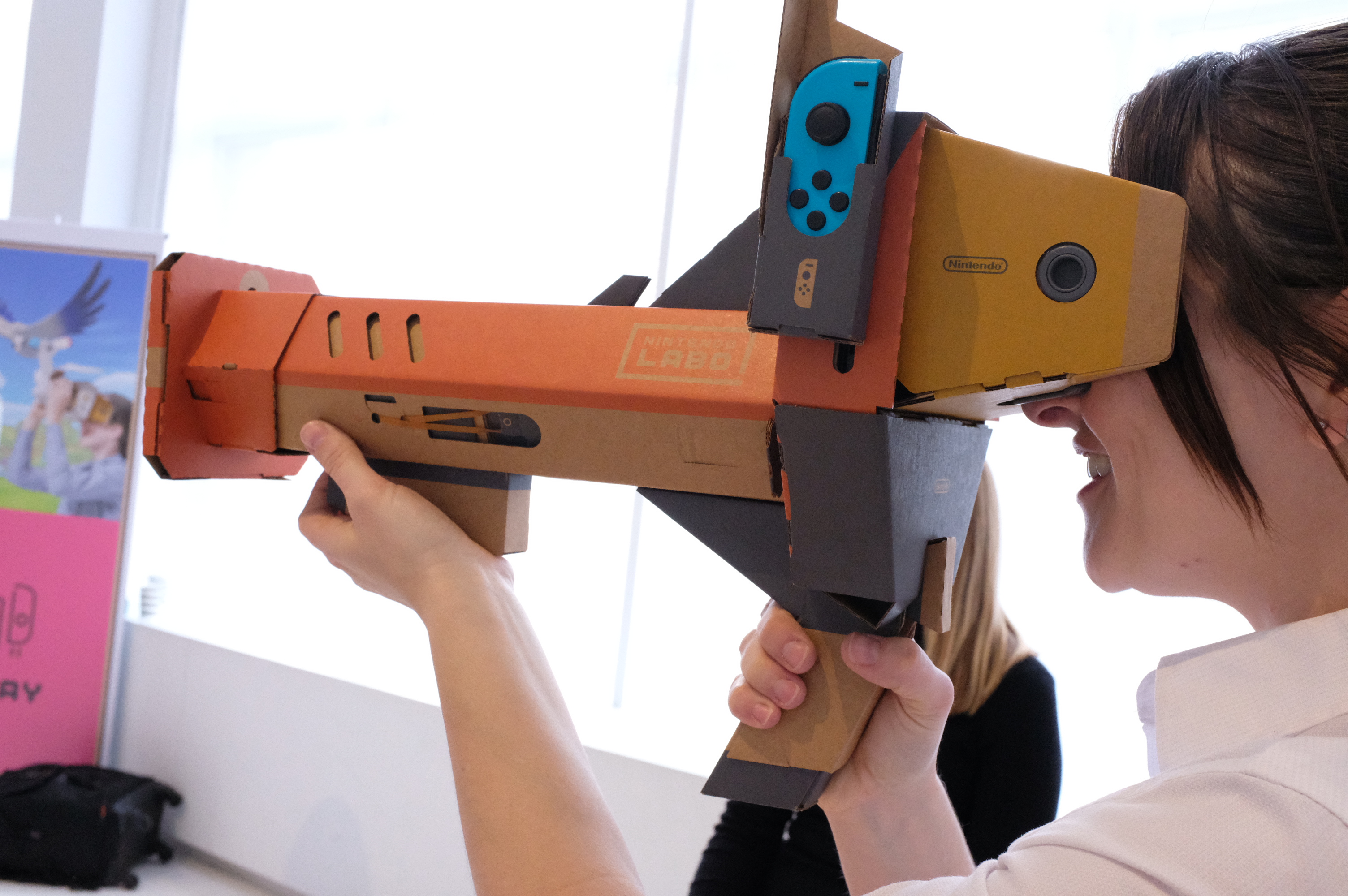 Your mileage with each title will vary. Certainly some (Bird and Blaster spring to mind) will stay with you longer than others and demand more repeat play. On the whole, each buildable peripheral launches with one (maybe two) compatible games. The good news, however, is that, like Labo, the company packs a lot of controllers (and therefore experiences) into a single kit.

The standard Labo: VR Kit ships with six Toy-Con projects (VR Goggles, Toy-Con Blaster, Toy-Con Camera, Toy-Con Bird, Toy-Con Wind Pedal and Toy-Con Elephant), while the cheaper Starter Set comes with two (Goggles and Blaster). If you go for the latter to dip your toes in the water or just to save on cash, there are a pair of â€œexpansion setsâ€� to get the full experience. 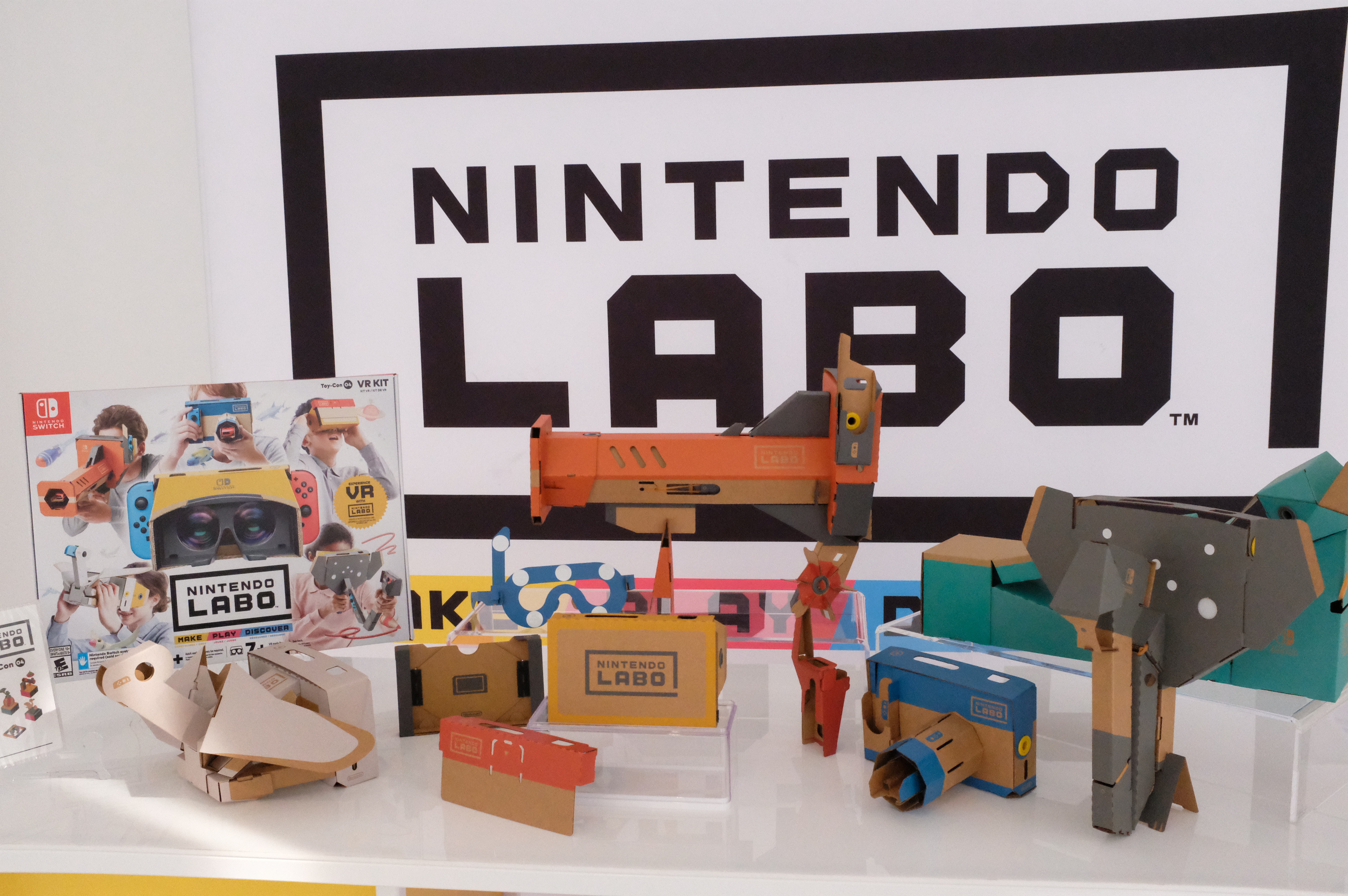 Unlike the last time Nintendo came to town with a Labo press tour, we didnâ€™t actually get any time to build. That said, if previous kits are any indication, thatâ€™s half of the fun and value proposition here. Also, the amount of time youâ€™ll spend building varies greatly from project to project â€” take it from me, someone who spent most of a work morning building that damn piano.

Once built, the VR experience is about on-par with what youâ€™d expect from a Google VR. Again, itâ€™s a set of lenses attached to a hunk of cardboard. This is no Rift or Vive and the immersiveness of your own experience will vary. The graphics are cartoony and oftentimes just large polygons. But a well-crafted casual gaming experience can be enough to pull you out of your own head for a bit. Bird is the best example of this. 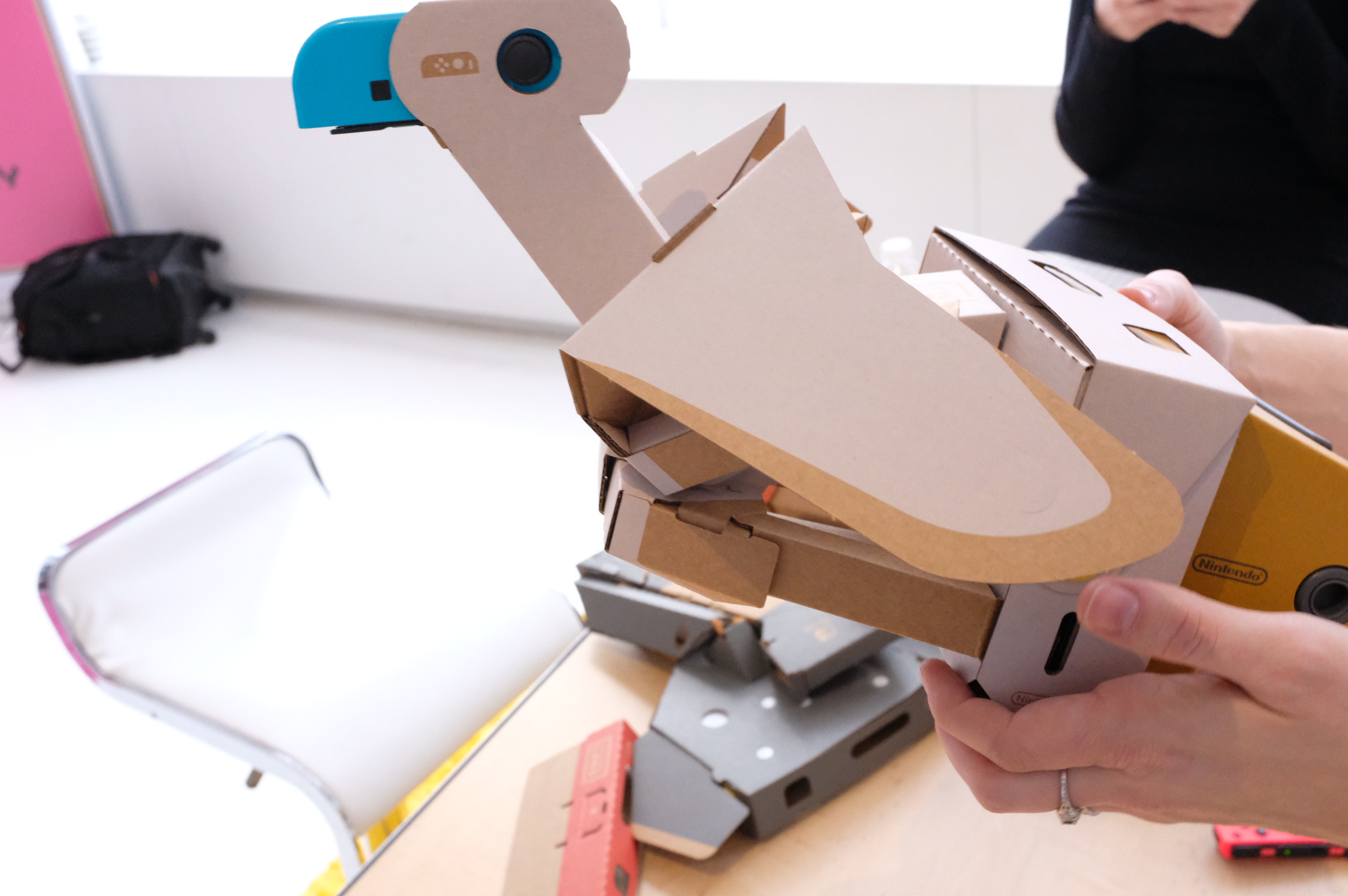 The controller clips on the headset, with a Toy-Con popping out the other end like a beak. As a player, you hook your hands on either side of the display and flap along as you play a bird, flying around trees and completing different missions to feed an army of hatchlings. Itâ€™s a relaxing reprieve from some of the faster-paced games, as you glide around the skies. Add in the foot-controlled Wind Pedal, and the system delivers a puff of air to your face as you boost your bird, adding to the effect.

Blaster, a big, fun novelty gun, is the most engaging of the bunch. When I ended my demos with some extra time to spare, the Nintendo rep asked me if I wanted to give any of the games another go. The answer was simple. A simple first-person shooter, Blaster pits you against an army of alien blobs. You load the gun by cocking it like a shot-gun, and pull the trigger to an explosive effect.

Honorable mention goes to Doodle, which uses the bizarre elephant-shaped controller. The experience is unique from the rest in that itâ€™s not actually a game, but rather a 3D drawing tool. Itâ€™s one of the more clever additions to the pack, though actually drawing on a 3D plane with a cardboard controller shaped like an elephantâ€™s trunk is easier said than done. The implementation is a bit lacking, but it offers interesting insight into where Labo VR might go in the future.

Honestly, I just scratched the surface during my briefing. But thereâ€™s little question that Labo VR is a fun and singular experience. Thereâ€™s also a special screen holder, so users who have rough time with VR can experience a 2D version of the games and accessories. Also, as with the standard Labo kit, Nintendo has bundled in Toy-Con Garage, so users can start building their own games when they tire of the pre-packaged experiences. 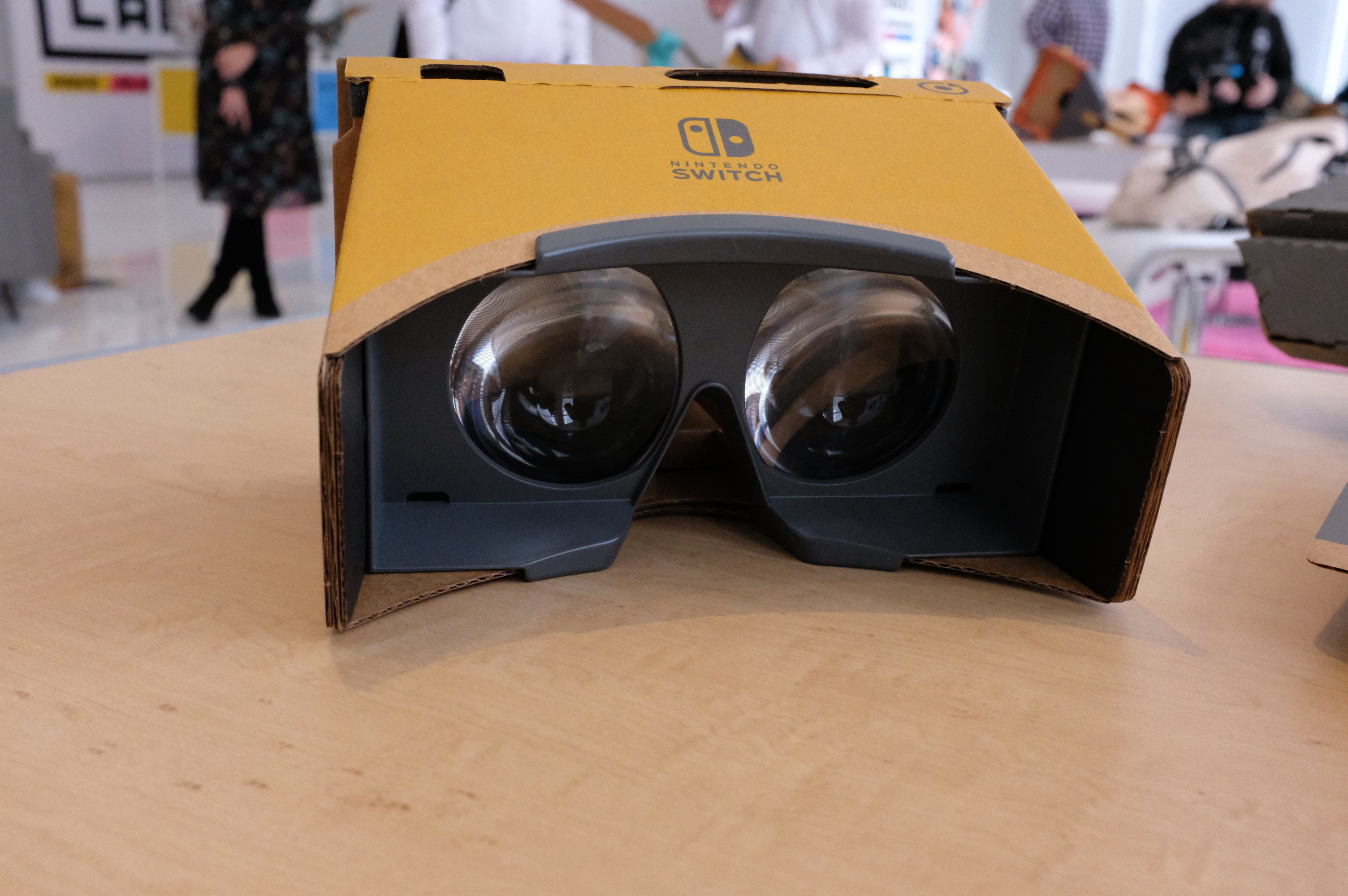 If thereâ€™s one disappointment in all of this, itâ€™s that it will likely be a while before we see a full standalone VR experience from Nintendo. The idea of playing as Mario, Link and the like in virtual reality is no doubt something of a lifelong dream for plenty of gamers who grew up on the characters. But while Virtual Boy is a quarter-century in the past, the memory still lingers.

Until then, Labo VR is a fully engaging take on VR, and a uniquely Nintendo one, to boot.