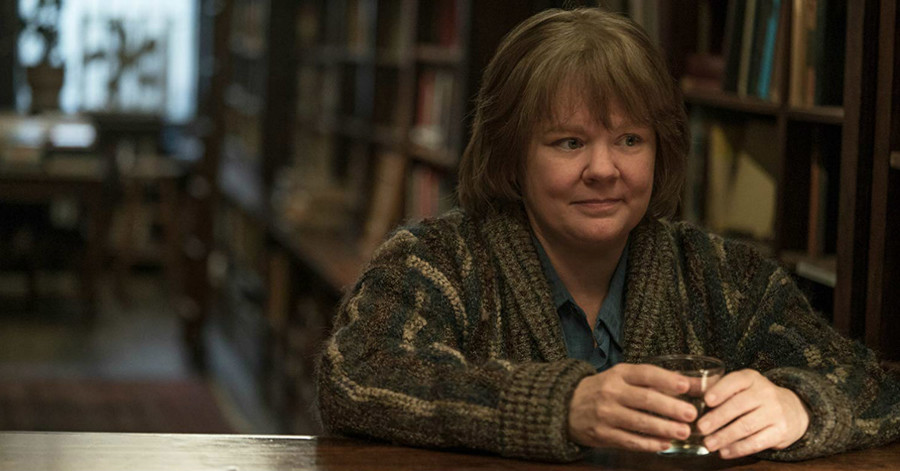 Melissa McCarthy as Marielle Heller in Can You Ever Forgive Me? (Mary Cybulski/20th Century Fox)

Marielle Hellerâ€™s Can You Ever Forgive Me? is more than a biopic of notorious-author-turned-literary-forger Lee Israel. With its biting wit, heavy drinking, and doomed romance, it functions as an antisocial lesbian sister to Alan Rudolphâ€™s Mrs. Parker and the Vicious Circle, which is fitting, considering that Parker is one of the iconic writers Israel impersonates in her forged letters. And much like the earlier film, Can You Ever Forgive Me? serves as one of the most achingly honest portraits of a writerâ€™s life.

In a ballsy Old-Hollywood performance, Melissa McCarthy plays a writer who rejects the elegant, mannered trappings of New York Cityâ€™s chic literary culture. Or perhaps she knows sheâ€™ll never fit in, even if she tries. Despite her slavish devotion to early-20th-century entertainers, Lee doesnâ€™t emulate any of their manners or charms. Sheâ€™s a tough, down-to-earth lesbian with a sharp tongue and stiff drink always in hand who doesnâ€™t quite know how to play the game. Her rejection of the artifice of politeness and the clear ways it hinders her career shatters the cinematic myth that having â€œattitudeâ€� immediately opens doors. Most people donâ€™t appreciate moxie, especially those who serve as gatekeepers to opportunity, like Israelâ€™s agent Marjorie (Jane Curtin).

Weâ€™re introduced to Israel when sheâ€™s drunk in her office cubicle after working late. Sheâ€™s surly, uncomfortable, and significantly older than most of the colleagues who whisper about her within earshot as if sheâ€™s a cantankerous great aunt, too old to realize sheâ€™s the topic of conversation. But Israel is painfully awareâ€”thatâ€™s why she drinks. She wants to be at ease with reality. It doesnâ€™t always work, but she keeps chasing that calm, while her inner-self tries to catch up. Sheâ€™s promptly fired, sending the clear message that sheâ€™s a stubborn relic of another time who must be replaced.

Later, at a swanky publishing party thrown by Marjorie, Israel seethes with rage as she watches hotshot Tom Clancy (played with adequate pomp by Kevin Carolan) sip sherry and boast about never having writerâ€™s block. Though she looks down on Clancyâ€™s writing style, heâ€™s getting published and she isnâ€™t, only adding to her bitterness. Much like everything else about her, Israelâ€™s defense mechanisms and uneasy relationship with her writing ability are almost painful to witness. She doesnâ€™t feel like part of the discourse. Instead of mingling, Israel moves through the party as if sheâ€™s an uninvited guest, stealing toilet paper and a coat as sheâ€™s leaving.

Israel doesnâ€™t open up until a chance encounter with Jack (Richard E. Grant), another down-on-his-luck writer, at a bar. There, Can You Ever Forgive Me? fully transforms into a â€œwritersâ€™ film.â€� Israelâ€™s burgeoning friendship with Jack rings true: They exchange jabs about their profession, the culture around it, the people they consider to be hacks, and each other. Despite their low economic status, their conversations reveal how insular and exclusive writing communities can be, even if they seem loose and disjointed to the people who are in them. While discussing a former colleague, Jack first reveals that sheâ€™s dead. Then, after taking a moment to think, he concludes that â€œmaybe she didnâ€™t die, maybe she moved to the suburbs.â€� This hilarious line encapsulates the absurdity of working in the arts. So much of the work and the culture are concentrated in a few â€œmajorâ€� cities, so leaving them is akin to falling off the face of the Earth.

But itâ€™s not enough to just live in literary cities. You have to constantly write, pitch ideas, and mingle to land new opportunities and make people remember you exist. Israel, an introvert with vintage tastes, has trouble keeping up with whatâ€™s â€œhot,â€� which explains why her proposed Fanny Brice biography has failed to drum up interest. Faced with a sick cat requiring expensive care and possible eviction, Israel decides to use her love and familiarity with classic writers to impersonate them in fake intimate letters. Rather than fame or fortune, her actions are fueled by actual financial need, a feeling of obsoleteness, and perhaps a little sadness.

Can You Ever Forgive Me? may be a period piece, but it has one clear through-line that speaks to our current moment: Itâ€™s difficult to survive as a writer. Though writing is the backbone of most industries, writers are often considered expendable and easily replaceable, especially during the ill-fated â€œpivot to video.â€� As writers are laid off every month and staff positions continue dwindling, young writers like myself bite our fingers to the nubs wondering if staff positions and book deals are just pipe dreams. Watching Israel literally writing for her life and only spending on necessities (and liquor) was relatable because thatâ€™s what so many of us are doing right now.

Writing is an unglamorous, unsteady, and unpredictable profession, and it requires more than talent and skills to stay afloat. Writers have to learn to market themselves, build and maintain professional relationships, and always wear their networking hats. Whether a writer has official representation or not, they often act as their own agent. Theyâ€™re the product, and in order to survive, they must always be primed for sale. Pitches and book proposals are pleas to the heavily pocketed powers-that-be that their words are worthy of investment. As a result, playing the game can, to some degree, be a matter of life or death.

Israelâ€™s failure as a writer (in the traditional sense) has largely to do to her inability or unwillingness to play that game. Early in the film, Marjorie gives Israel a list of options: Be nice, create a distinctive writing voice, or â€œfind another way to make a living.â€� Itâ€™s hard to determine if Israel turns to forgery out of stubbornness or if she truly believes she canâ€™t do anything else. But her deception is a last-ditch effort to use her skills to pay tribute to iconic writers while also paying the rent. In a way, thereâ€™s a certain nobility to her deception and her affection for literary history, and by writing the memoir on which this film is based, sheâ€™s also become part of that history. Can You Ever Forgive Me? resonates as a historical snapshot as well as de-glamorization of the most misrepresented profession in cinema.