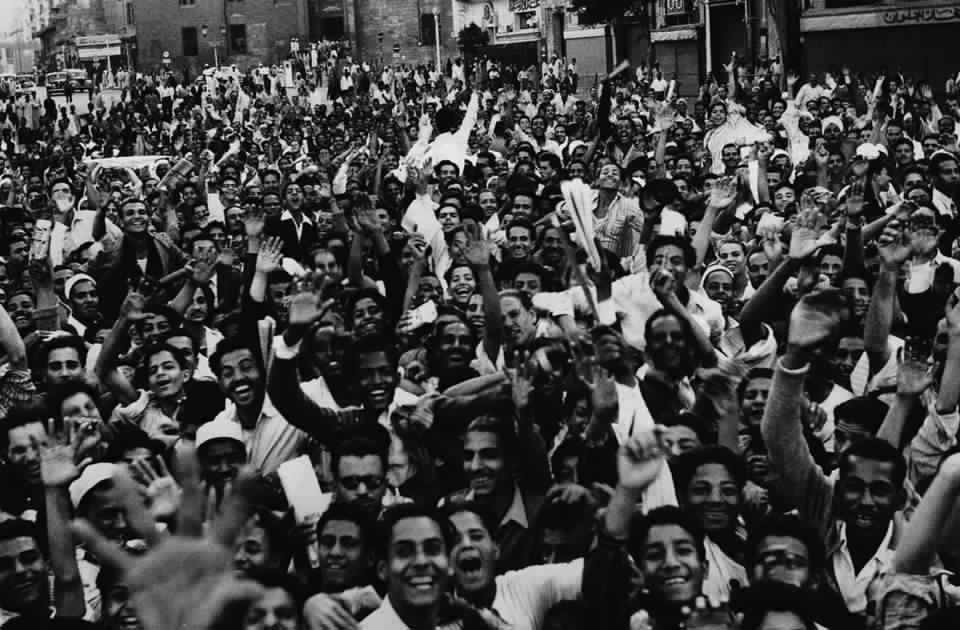 An Egyptian crowd protests against British rule over the Suez Canal and Sudan in 1951. Photo credit: AP/ Al Ahram

Today, Egypt commemorates the anniversary of the 23 July Revolution of 1952. Although, at this point, Egypt has garnered a little reputation for its pattern of revolutions, the 1952Â  one was a particularly significant historical event as it enabled the political transformation of the country from a monarchy to a republic. It was also important in the history of Egypt’s first presidencies as well as the future political consideration of the Muslim Brotherhood.

Prior to 1952 Egypt has been ruled by King Farouk I according to the Mohamed Ali Pasha royal lineage, and it still suffered from the traces of British influence on the government. It would be worthy to note that by 1952, Britain’s occupation of Egypt was entering its 70th year.

The Egyptian army stands outside of l Abdin Palace as King Farouk I is forced to abdicate. Photo credit: AP/ Al Ahram

Led by a young Gamal Abdel-Nasser and veteran General Mohamed Naguib, a group of young and ambitious Egyptian army officers known as the ”Free Officers” carried out a coup d’etat where they forced King Farouk I to abdicate to his young infant son, Crown Prince Ahmed II. It was known that the deposited king lived in exile in Italy’s Capri until his death in 1960. 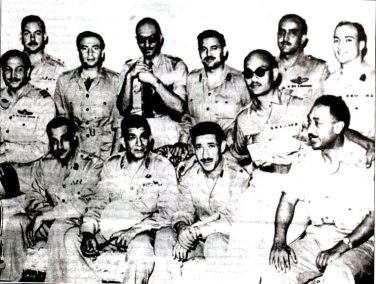 The Free Officers movement, of which future prominent political figure Sadat was part of, focused on redistributing land, ending feudalism, gaining full independence, setting up a powerful army and allocating wealth from the rich to the poor. However, the revolution’s leadership started to crack from within as the council was divided over the reforms to be implemented.

Following these ambitions, General Mohamed Naguib became Egypt’s first president in 1953 although he ruled briefly. Succeeding him was Gamal Abdel Nasser, a charismatic figure who would become known worldwide as vocal opponent to anti-colonialism, an endorser of self-determination, a panarabism pioneer and the face of Egyptian nationalism.

Under the rule of Naguib, Egypt had begun implementing reforms and discussing the future of Sudan with Britain when the Revolutionary Council ousted him of his position, officially accusing him of plotting with the members of the Brotherhood against the Free OfficersÂ  in November 1954. Accordingly, the Council installed Nasser as President of Egypt, and Naguib would spend two decades under house arrest.

The Muslim Brotherhood, which had been founded in Egypt in 1938 but which had been banned for its acts of violence, had been gaining momentum and saw the abdication of King Farouk I as a potential for political advancement. Its presence during the formation of Egypt’s future political agenda was highly debated.

It was soon becoming clear that the secular, political and nationalist viewsÂ  of Nasser were at odds with the MB’s highly conservative and religious one.Â Â As such, with Nasser as head of Egypt, the Revolution Leadership Council officially disbanded and banned the Muslim Brotherhood in January 1954.

A Muslim Brotherhood member attempted to assassinate Nasser during a speech in Alexandria, in the same year, but failed.

Since, Egyptian perception of the Muslim Brotherhood has been poor, and the Brotherhood was forced to carry out its activities in secret up until the ex-presidency of Mohamed Morsy, the first president following the 2011 revolution.