Opendoor files to raise another $200M at a $3.7B valuation, documents show

The housing market is predicted toÂ cool this year, but the market for startups selling houses? It seems to be heating up. Opendoor, the company that aims to bypass real estate agents and brokers by providing an online platform — by way of a mobile app — for people to buy and sell properties direct, has filed papers in Delaware indicating that it would like to raise around $200 million more, at a valuation of about $3.7 billion.

The Delaware documents (embedded below, and provided to us by Prime Unicorn Index) do not make it clear if this would come in the form of an outside round, or a conversion — secondary transactions would not be disclosed in public domain documents, or a combination of the two; nor is it clear if the funding has closed already. The documents are dated February 8th of this year.

Eric Wu, Opendoor’s CEO and co-founder, did not respond to a request for comment, and a spokesperson for Opendoor declined to comment.

The shares are described as a “Series E-2”, which Justin Byers, an analyst with Lagnaippe Labs, noted likely means this is an extension on Opendoor’s last round, from September 2018, of $400 million.

That itself was an expansion of a previous E round, which Opendoor had raised in June 2018, of $325 million. Opendoor had been valued at around $2.47 billion post-money in September, according to PitchBook, and the shares in the document are around 37 percent higher — hence the $3.7 billion estimation here.

Backers of the company include SoftBank, along with some 36 others that include some of the biggest names in VC, such as Andreessen Horowitz, Coatue, General Atlantic, GV, Initialized, Khosla, NEA, Norwest and many more.

The premise of Opendoor — co-founded by Wu, Ian Wong,Â Justin Ross andÂ Keith Rabois on the back of an idea that Rabois had many years before — is to cut out some of the steps, and subsequent money and time spent, that come with buying or selling a property. (For those who have been through it, you know that the extra fees and rigmarole can be a killer and sometimes feels like it could be done better; that’s what Opendoor is addressing, in part with a very transparent pricing structure.)

Opendoor does this by becoming the virtual middle man. As Opendoor describes it, “IfÂ youâ€™re selling, sell your home to us to eliminate the hassles of showings and months of uncertainty. If youâ€™re buying, we make it incredibly easy to tour hundreds of Opendoor homes so you can find the perfect one.” It also has created a streamlined process to cut down the paperwork and work that agents do around transactions.

As of September last year, Opendoor had raised $2 billion in debt to finance these purchases — although the company today said that it is now “buying homes at a run rate of almost $4 billion a year” and that its transaction rate is currently at over 2,000 customers per month, including both buyers and sellers, and it has served some 30,000 customers to date across 19 metro regions covering more than 20 cities: 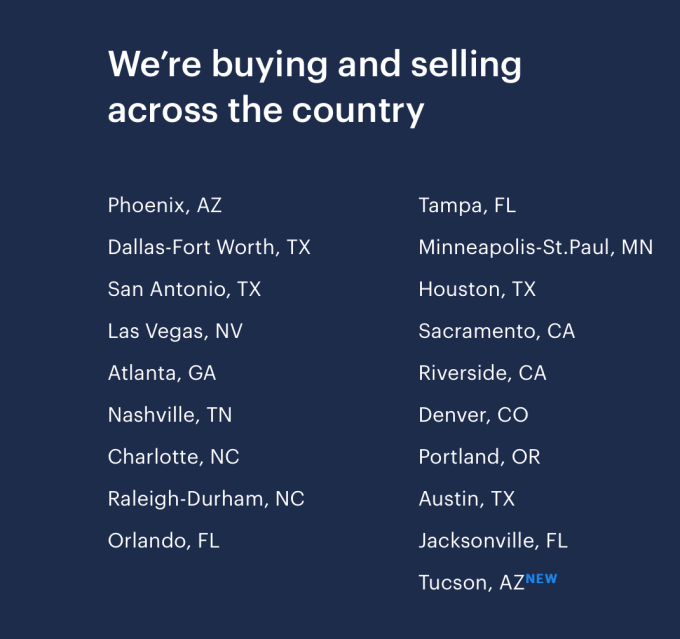 While housing prices had largely recovered in a lot of U.S. cities hurt by the previous crash, experts have said that a rise in inventory, coupled with rising mortgage rates and tax uncertainly, are set to cool the overall market in 2019.

But with the housing industry regularly rebounding and growing over the longer term — the saying “safe as houses” doesn’t come from thin air — it may be that investors are still prepared to make further-reaching bets on platforms that could prove to be strong players when the market is on a high.

Interestingly, Wu has hinted that the company will be making some moves in the area of mortgages and home improvement loans, which could free up and encourage more transactions at a time when traditional mortgage rates are rising.

â€œWeâ€™re doing some things around mortgages that will be integrated into the shopping experience,â€� Wu said in September, adding that the company â€œalso wants to enable home buyers to personalize their experience.â€�

Updated to credit Prime Unicorn Labs and also clarify what kind of funding this might be.

View this document on Scribd