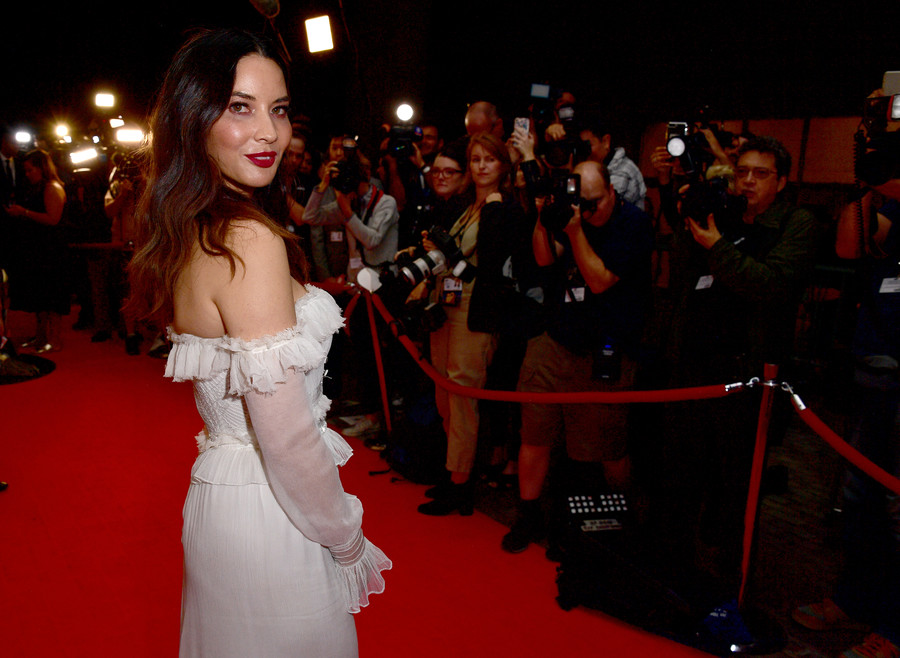 Olivia Munn at the premiere of The Predator at the Toronto International Film Festival on September 7 (Photo credit: George Pimentel/Getty Images)

In the trailer for director Shane Blackâ€™s hyper-masculine new thriller, The Predator, agent Will Traeger (Sterling K. Brown) sits across from science teacher Casey Bracket (Olivia Munn) and describes the frightening creatures who just crashed a spaceship into Earth. â€œPredators donâ€™t just sit around making hats out of rib cages,â€� he warns her, â€œThey conquered space.â€� Itâ€™s the kind of ridiculous dialogue that weâ€™ve come to expect in over-the-top action films, but itâ€™s also not that far from describing the chilling threat posed by men in Hollywood. As weâ€™ve read repeatedly over the past year, the men running movies arenâ€™t just physically attacking women on and off film sets. Theyâ€™re also dominating the literal space of the movie industry, where women hold only 18 percent of key behind-the-scenes jobs.

And the environment they rule over not only leaves women off screen, but has, for decades, allowed these same men to assault, harass, and intimidate vulnerable people with little repercussion. Days before the premiere of The Predator at the Toronto International Film Festival, Munn once again drew attention to this horrific reality after it was reported that Black had hired his friend, Steven Wilder Striegel, to act in the film despite knowing that heâ€™d once sexually harassed a 14-year-old girl. (Striegel has also appeared in Blackâ€™s Iron Man 3 and The Nice Guys.) Munn, the only woman in the lead cast, pushed 20th Century Fox to remove Striegelâ€™s scene, and publicly stated that she found it â€œboth surprising and unsettlingâ€� that Black did not inform her or the rest of the cast of his friendâ€™s past conviction as a sex offender â€œprior to, during, or after production.â€�

Itâ€™s hard to believe that Black wasnâ€™t aware at the time of filming the now-deleted sceneâ€”which involved Striegelâ€™s character repeatedly harassing Munnâ€™s characterâ€”that director Brett Ratner sexually harassed Munn, considering she publicly wrote about the topic months before the casting of his film was complete. Yet even now, the directorâ€™s first impulse after the news broke wasnâ€™t to support Munnâ€”but to defend Striegel, telling the Los Angeles Times that he â€œpersonally chose to help a friend.â€� And the subsequent lack of response from Munnâ€™s costars further demonstrates just how stubbornly Hollywoodâ€™s patriarchal, predatorial environment is being maintainedâ€”even in the face of the #MeToo movement.

As women, especially women of color, risk their careers by speaking up about intimidation and violence, most men have chosen to avoid discussing their own power in the industry, while quietly continuing to applaud the work of men around them. Though Black eventually issued a public apology for casting Striegel, Munn told Vanity Fair that she had yet to hear from him directly. She also told the magazine that sheâ€™s been increasingly isolated by the rest of the castâ€”most of whom hadnâ€™t reached out to her either. After the filmâ€™s premiere in Toronto on September 6, mere hours after the studio decided to cut the scene, Munn witnessed costars Boyd Holbrook, Trevante Rhodes, and Keegan-Michael Key giving Black a standing ovation. â€œI looked back and I see the guys standing up, and I was just confused because I hadnâ€™t heard from them during the day,â€� she said.

Holbrook, the white man with top billing in the film (as Quinn McKenna), later admitted to pulling out of press appearances with Munn, because â€œthis type of social commentary is new to me.â€� When asked about his feelings toward the movieâ€™s director, Rhodes told the Los Angeles Times (while sitting beside Munn) that he â€œwasnâ€™t disappointed in Shane [Black]â€� but rather disappointed in the â€œsituation.â€� Sterling K. Brown, who was not in Toronto with the rest of the cast, tweeted a statement of his own that didnâ€™t challenge Black and praised the studioâ€™s handling of the situation. If men are unwilling to challenge hyper-masculinity on film sets, are they truly willing to make men uncomfortable within the patriarchal world that fuels it? Or are they more concerned about preserving their own ability to rise to the top?

In a 2017 essay for Entertainment Weekly, Munn wrote that â€œthe system that lets men like Ratner and [Woody] Allen back in, is the same system that creates disparity,â€� connecting a culture of sexual entitlement to other forms of abuse, including the lack of equal pay for women. The â€œsituationâ€� that Rhodes speaks of is larger than this one movie, or even the actions of these few men, but the tendency toward supposed neutrality highlights how most men in the spotlight have chosen to respond to Tarana Burkeâ€™s #MeToo movement. Regardless of how much they know about the specifics of Striegelâ€™s actions against his 14-year-old victim, all of these men are aware of the movie industryâ€™s gender inequities. They knew about misogyny in Hollywood long before stepping onto the set of The Predator, a film series that has historically disregarded women.

If men are unwilling to challenge hyper-masculinity on film sets, are they truly willing to make men uncomfortable within the patriarchal world that fuels it?

And those in Toronto were certainly aware of these conditions when they chose to stand and applaud Black on stage at TIFF rather than supporting the woman sitting nearby. Even as some offer private statements of support for people of other genders (as Key reportedly did with Munn) or donate to charities, few have moved themselves into a place of public discomfort. The decision Black made to protect his friend at the expense of Munnâ€™s safety can only be made in environments where men feel protected, have unquestionable power, and hierarchies of gender, race, and class are firmly in place. When men in Hollywood make choices rooted in a desire not to disturb this house of cards, theyâ€™re also working to maintain oppressive conditions.

After all, thereâ€™s a great benefit for men (especially straight white, thin, able-bodied cis men) in preserving the status quo of film sets where directorsâ€”more than 80 percent of whom are white menâ€”are given endless respect and control. Itâ€™s not just that these men shouldâ€™ve responded better to Munnâ€™s call out, but they shouldâ€™ve already been using their platforms as actors to speak openly and consistently about sexual harassment and violence in their industry. One of the Oxford definitions of â€œpredatorâ€� is â€œa person who ruthlessly exploits others.â€� And just as the white men in professional tennis have knowingly, for years, ignored the sexism and racism inherent in the structures of the sport they share with Serena Williams while accepting higher pay, the men of the film industry consistently take advantage of a horrifying cultural imbalance by not being a disruptive, discomforting force.

The question of how men in Hollywood will respond to #MeToo and #TimesUp has been answered loudly by this sort of ongoing silence. Regardless of the donations made or the pins worn, the real answer has been in the quiet, ghastly acceptance of a return to normal; of showing up to productions, premieres, and promotional tours and not demanding a sea change at every turn; and allowing the culture to persist as it always has, regardless of the terror it births, all because of the way it might keep them safeâ€”and in a position to conquer.