Postscript wants to be the Mailchimp for SMS

Email is certainly not dead, despite many such exclamations, but there’s no question that it’s a bloated, seeping hog of a platform on which it’s incredibly difficult for businesses to develop meaningful relationships with customers.

Postscript, a startup launching out of Y Combinator’s latest class, wants to learn from what email marketing got right and translate that to the next frontier of B2C communications: SMS. It basically wants to be the Mailchimp for texts.

“We are witnessing the decay of email,” Postscript president Alex Beller tells TechCrunch. “User behavior is all SMS now and e-commerce traffic and web traffic, in general, are so heavily mobile.” 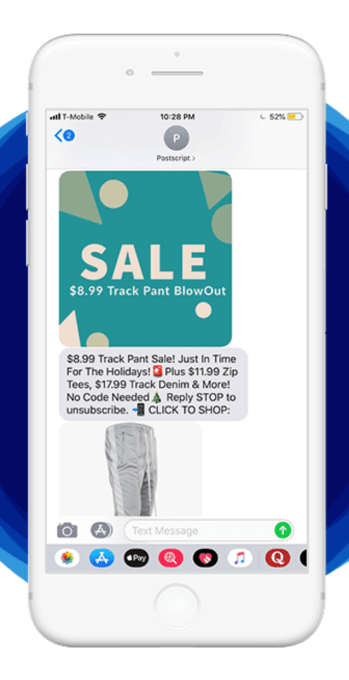 The startup specifically wants to focus on shaping how consumers and businesses engage in the relationship around online commerce. Do you have a subscription to some cook-at-home meal startup? Then maybe they’ll shoot you a message asking if you want to add a new dessert option to your meal this week. Reply “YES” to add. That’s it.

The startup handles ensuring that businesses have proper consent from users to get text messages sent to them. From there businesses are able to segment users, plan SMS campaigns with text and media and have everything backed up by a decent analytics suite so that customers can see what happens on the other end of the texts. Beyond campaigns, communications can be automated based on customer actions so they get some feedback after they make a purchase or other action.

Being at the forefront of a new frontier for communicating with customers seems to have its advantages. Postscript claims a 95+ percent open rate and 35 percent click-through rate, numbers that are pretty wild for marketers that have dealt with the stats on email campaigns.

Given that people are used to SMS as a means of conversation, people are also a lot more likely to respond and ask questions inside the chain, something the Postscript founders were a bit surprised by but soon built into their feature set alongside integrations with customer support platforms.

“We rushed out this inbound feature when we realized how much [communication] we had coming in from users,” Postscript CEO Adam Turner told TechCrunch. “It’s all about engagement, not just clicks… and a one-way communication channel.” 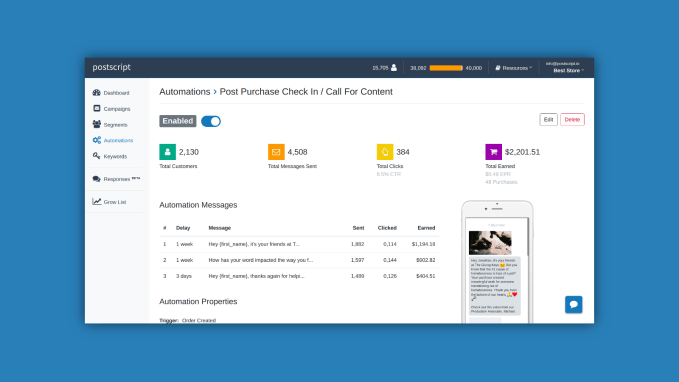 As a consumer, the idea that my text messages are soon going to be inundated by #brands elicits a gut reaction to burn it all down, but there’s an air of inevitability that SMS will become the next place that businesses want to infiltrate.Â We’re already getting updates from food delivery services and UPS; Postscript wants their platform to let people expand and manage these relationships.

There are a few reasons why you don’t have to gravely fear your texting app turning into a corporate dump. The opt-in process for phone communications is already a bit more codified in the U.S., and as companies attempt to stay in the good graces of GDPR for fear of the EU god, it might be more likely they tread carefully. Additionally, while SMS fees aren’t substantial, there’s certainly a more baked-in cost than with forwarding an offer to a huge bank of emails. Lastly, users just have to punch out a quick “UNSUBSCRIBE” to get out of messages from which they’ve gotten their fill, a standard across carriers.

Right now the company is closely integrated with Shopify so users can add this to their storefronts. Pricing varies based on the amount of messages you’re sending. There’s a free tier for sending 100 messages per month, $50/month for sending 1,000 and a few more tiers topping out at a 40,000 SMS per month/$1,500 tier.

North will launch pop-up stores across the U.S. so you can try its smartglasses New Apple patent hints clamshell-style foldable phone may be in the works